Manitoba, which goes to the polls on Tuesday in their provincial election, finally saw some polling numbers this past week. After not having a poll since June, three polls have just come out. The most recent one was just released this morning by Probe Research, and gave the NDP a moderate lead over the Tories of 46% to 43%, with the Liberals far behind at 7% and the Greens at 4%
These numbers don't show a huge change from the last election in 2007, where the NDP won 45% of the vote, and the Tories 38%. The poll also showed that the NDP is holding ground in Winnipeg, which holds most of the seats in the province, while the Tories are gaining, but only at the expense of the Liberals. However, in rural Manitoba, the NDP is down considerably, and this might mean some seat losses. However, must of rural Manitoba votes overwhelmingly PC anyways, so much of this swing will be wasted.
Due to the small change in voter support from 2007, I expect little change from that election. Following is my riding by riding projections for Tuesday's election. Note, I have not been able to get a hold of the transposition of the votes from the last election (Manitoba has just undergone boundary redistribution), however, I have been pointed to some poll maps from the last election overlaid with the new boundaries. That gave me a good idea as to how much some ridings will have changed. Many thanks to Krago from the rabble.ca forum for making these!
Riding changes since last prediction
For the most part, there were just some alterations from my last projection, despite the fact that it has been three months since my last one. I have now taken Swan River, Interlake, Selkirk and Brandon East out of the NDP category and put them into too close to call. Meanwhile, River Heights the only Liberal call I had is now too close to call as well. River East is the only riding that I had projected to go Tory that has been put into the too close to call column. Meanwhile, the Tories are now projected to win Dawson Trails and St. Norbert, both pick ups from my last projection. And, Fort Richmond is now projected to go NDP. 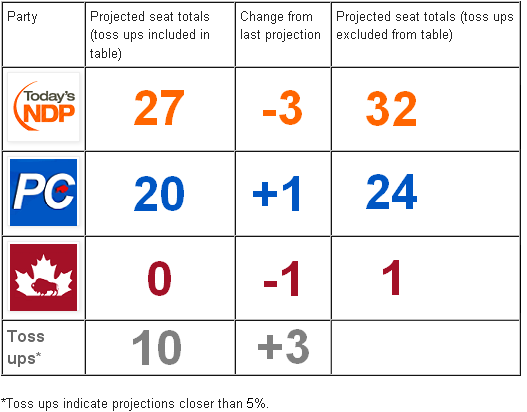 Conclusion
It looks like the NDP will be headed for their fourth straight majority government. Their slim lead in the polls doesn't matter too much, due to the fact that their benefited from having much of the Tory vote being wasted in rural Manitoba. However, if the Tories win all of their too close to call seats, they can still win a majority of their own. In addition to the 24 seats I have them projected to win or are leading in, they would also have to win Interlake, Kirkfield Park, Southdale, Swan River and either St. James or River Heights to get a majority. Not outside the realm of possibility.
Posted by Earl A. Washburn at 11:01 AM