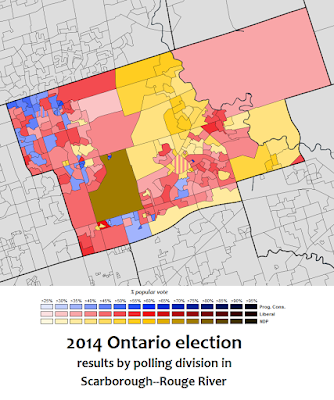 Another provincial by-election is being held this week, this time in Ontario, in the suburban Toronto riding of Scarborough—Rouge River, to fill a vacancy created last March when its provincial member of parliament, Bas Balkissoon unexpectedly resigned for mysterious reasons. Balkissoon, a member of the governing Liberal Party, had represented the riding since a by-election in 2005. The riding has a long history of voting for the Liberals; it has voted Liberal in every provincial election since 1985. However, recent election races in the riding have been fairly close, and the expectation is that this by-election will be too.

Scarborough—Rouge River is located in the northeast corner of Toronto, covering a number of very diverse neighbourhoods like Malvern and Agincourt North. It is named for the Rouge River, which runs through the east end of the riding. East of the Rouge River is Rouge Park, which covers about a quarter of the riding's area and surrounds the famous Toronto Zoo. The urban area of the riding is divided into two clusters, Malvern/Morningside Heights in the east and Agincourt/Millken in the west. These urban areas are further divided into sub-neighbourhoods.


Scarborough—Rouge River is noteworthy for its huge immigrant population. A full two-thirds of residents are immigrants, over half of which have immigrated to Canada since 1981. China and Sri Lanka are the biggest source of immigrants to the riding, but many immigrants have come from the Philippines, India and Hong Kong too. Only 5% of the residents are third or more generation Canadians. 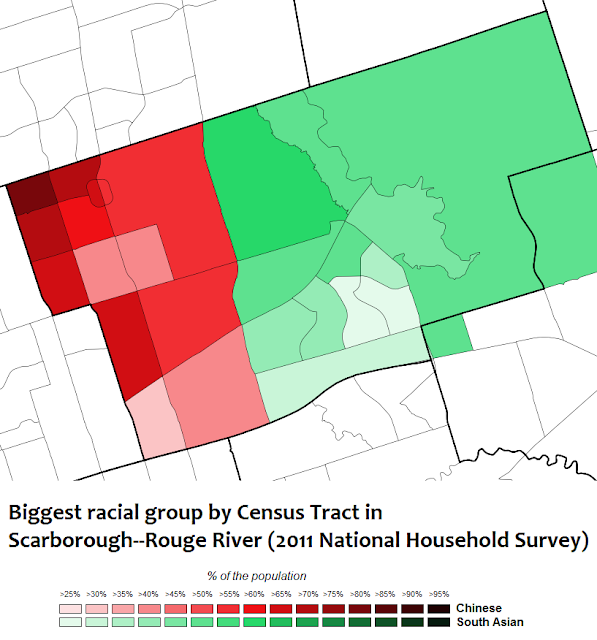 Beginning at the 1975 election, all of the north end of Scarborough was united within a newly-shaped Scarborough North riding. Population growth made the riding smaller over the course of its history until the area became Scarborough—Rouge River in 1999 when provincial riding boundaries were made to match their federal counterparts. This means that in the next provincial election, most of the riding will be transferred to the new riding of Scarborough North, while the eastern half of Malvern will be moved to the new riding of Scarborough—Rouge Park. (On a side note, the arbitrary division of the Malvern community is quite unfortunate, considering that a better boundary could have been Markham Road, would have made not only a better “natural” border, but also marks the border of the two major ethnic communities in Scarborough's north end.)

Scarborough North and Scarborough—Rouge River have been continuously represented by Liberals since 1985, with Alvin Curling representing the area until Balkissoon's by-election win in 2005. Before 1985, the area was a safe Tory seat, but the increasing number of immigrants moving into the area helped the Liberals take it and made it into a safe Liberal seat. The riding would remain a safe Liberal seat until both the NDP and Progressive Conservatives began making inroads into the minority communities. In 2011, NDP candidate and school trustee Neethan Shan, an immigrant from Sri Lanka, gave Balkissoon (himself an immigrant from Trinidad and Tobago) a run for his money, losing by just over 2000 votes. The 2014 election would become a three-way race with city councillor Raymond Cho (a Korean immigrant) running for the Tories against Balkissoon and Shan, who ran again. Fewer than 5,000 votes separated the first place Balkissoon and the third place Cho. With the Liberals moving to the left in their rhetoric in that election, it is possible many socially conservative immigrants were turned off of by the Liberals as the riding was only one of a few in the province that saw a swing from the Liberals to the PCs.


Following the recent collapse of the Ontario Liberal Party's (and to a lesser extent, the federal Liberal Party) support among all immigrant groups in this riding, the Chinese western half and the South Asian eastern half of the riding have begun voting differently. Whether this has something to do with the party platforms or their respective candidates remains to be seen. However, patterns have emerged since 2011 showing that the Chinese population is increasingly voting for Conservative candidates, while the South Asian population has been increasingly voting NDP. The Liberals have still been able to get enough votes from both communities, and from the other minority groups in the riding (such as Filipinos and Caribbean Blacks) to still win the seat. In 2014, the only neighbourhood in the riding to vote PC (Port Royal) also happens to be the most Chinese neighbourhood in the riding, with 76% of the population there being of Chinese ancestry. Meanwhile, the neighbourhoods that voted NDP (Brookside, Dean Park, Morningside Heights) have the highest South Asian populations in the riding. The rest of the riding voted Liberal in 2014, to varying degrees, and is home to a more diverse population than the aforementioned neighbourhoods.

Just like in my Halifax Needham post from Tuesday, I also did a partisan voting index map for Scarborough--Rouge River. In each neighbourhood, I calculated the average difference in support between each of the three parties in the last two elections from the provincial average. This is slightly different than the calculations I did last time, as I had compared the Liberals to the NDP only (with the index showing the difference from an even two-way race), but this time I used three parties, so I couldn't do that, but it amounts to pretty much the same thing. Anyways, the map shows the NDP has done much better across the riding (especially in the east) compared to their province-wide numbers, while the Liberals are about even, while the Tories tend to under-perform throughout the riding.

These ethnic voting patterns have been evident in recent federal elections as well. In the 2011 federal election, the western half of the riding went Conservative, while the eastern half overwhelmingly backed the NDP's Rathika Sitsabaiesan, a Sri Lankan Tamil, who ended up winning the seat with 41% of the vote. With the riding's South Asian community split into two ridings in 2015, Sitsabaiesan was forced to run in the more Chinese-dominated Scarborough North seat, where she finished in a distant third behind the Liberal's Shaun Chen and the Conservative's Ravinder Malhi. The rest of the riding became part of the new riding Scarborough—Rouge Park which the Liberals easily won with their candidate, another Sri Lankan Tamil, Gary Anandasangaree. Did the 2015 election show that immigrants had come back to the Liberal fold? Perhaps, but only time will tell. What is clear is that South Asians appear more receptive to the Liberal Party than Chinese Canadians who are more divided in their voting allegiances.


While the federal Liberals remain hugely popular in Ontario, their provincial counterparts are polling very poorly, and are well behind the leading Tories. The Liberals have now been in power for 13 years, and have endured scandal after scandal after scandal. While poor inter-election poll results is nothing new for the Liberals, they are especially at a low point – the most recent Forum Research poll from August indicating they are now 13 points behind the Tories. And one issue that is hurting them, especially with socially conservative immigrant voters is the liberalization of the province's sex ed curriculum. Popular among progressives in the province, it has been more religious, especially immigrant voters who have been the most opposed to it. One would think that this would help the Tories, considering their new leader, Patrick Brown was elected with the backing socially conservative immigrant groups. Earlier in the year he vowed to overturn the new curriculum if elected as Premier, but he has since backpedalled and has now indicated that he won't be overturning the law, a move that will not help him win a riding that is overwhelmingly immigrant.

Two polls released on the eve of the election from Mainstreet Research and Forum Research have shown that we are indeed headed for a close race. Mainstreet's poll shows the Tories have a 5 point lead over the Liberals, while Forum's poll shows a tie between the two parties. Perhaps unexpectedly, both polls show the NDP well behind in third place, despite the party finishing second in both of the last provincial candidates. One thing to keep in mind is that it is incredibly difficult to poll ridings with a large immigrant population. I saw this constantly in my polling work at EKOS in the last election, and Scarborough North (the new federal riding overlapping Scarborough—Rouge River) was no exception. Impressively, Mainstreet's poll was conducted in Cantonese, Mandarin and Tamil (in addition to English), and was even weighted by ethnic group. The details of the Forum poll were not published, but I personally doubt they went to the extent Mainstreet did. As a pollster, I am particularly curious to see how well Mainstreet's poll does, considering the methodology they used. Will the data be more accurate, or was it all an exercise in futility in an impossible-to-poll riding?

Two names on the ballot will be the same as in the 2014 election. City councillor Raymond Cho will once again be the PC candidate. Cho actually represents the eastern half of the riding on city council, and has been involved in municipal politics since 1991. Cho was once a New Democrat, having run for the NDP in the 1988 federal election. Cho later became a Liberal, and ran as an “Independent Liberal” in the 2004 federal election, which upset the party. He then joined the Progressive Conservatives and ran in 2014. The NDP candidate is once again Neethan Shan, who was recently elected to represent the riding as a school trustee for the Toronto District School Board. This will be his third attempt to win the seat, after having come second in 2011 and 2014. This election will be Shan's 10th electoral contest of his life. He was first elected as a school trustee in Markham in 2006 after losing in his first attempt in 2003. He then ran for the NDP in Scarborough—Guildwood in 2007, then for Toronto city council in 2010 and 2014, losing both times to Cho. Fast forward to last January when Shan was elected as a trustee in an unnecessary, low turnout by-election (as all school board elections are!). One thing that might be hurting his poll numbers is that he may be seen as an opportunist- and who wants to vote in another school board by-election if he wins? As for the Liberals, their candidate is Piragal Thiru who is described as a “Liberal activist”, and is a refugee from Sri Lanka. He won the Liberal nomination by defeating the riding's former MP, Rathika Sitsabaiesan who had switched parties from the NDP. With two Sri Lankans in the race, it is entirely possible their vote will be split enough to allow the Tories to win the seat, which I believe is the most likely scenario (but, hey- I was wrong about Tuesday's race in Halifax!).

There are five other candidates in the race. The Greens, who never do very well here, are running administrator Priyan De Silva. There are also Freedom and Libertarian Party candidates, a “None of the Above” candidate who is running as “Above Znoneofthe” (presumably to ensure they are last on the ballot) and an independent candidate, Queenie Yu, who running almost exclusively to repeal the changes made to the Sex Ed curriculum.

We'll see if I'm right about the Tories picking this seat up when polls close at 9:00pm.