Residents of the city of Victoriaville, Quebec are heading to the polls today in a rare mayoral by-election. The city of 43,000 people in central Quebec is the main city in Quebec's Bois-Francs region, known for being Quebec's breadbasket. The city's top post has been filled on an interim basis by councillor Christian Lettre since the previous mayor Alain Rayes' election to the House of Commons for the Conservatives last October.

Politically, Victoriaville sits at the edges of Quebec's more conservative and nationalist leaning regions, and has elected both Conservatives and Bloquistes to the House of Commons in recent elections. Federally, the city is in the riding of Richmond—Arthabaska which the Tories picked up from the Bloc in last year's federal election with the election of Rayes. The BQ's André Bellavance had held the riding since 2004 before that. André Bachand held the riding for the Progressive Conservatives from 1997 to 2004. The city of Victoriaville itself has been much more nationalist than the riding as whole though, voting for the BQ candidate even when the riding voted PC in 1997 and 2000.

Provincially, Victoriaville is in the riding of Arthabaska, which has been held by Sylvie Roy of the right-of-centre Coalition Avenir Québec (CAQ) since 2012. Arthabaska has been won by the nationalist Parti Québécois and the federalist Liberals in recent years as well. The Liberals' Claude Bachand held the seat from 2003 to 2007 and from 2008 to 2012. The PQ held the riding from 1989 to 2003, and the CAQ's predecessor, the ADQ held the riding briefly from 2007 to 2008. Arthabaska backed the “Non” side in the 1980 sovereignty referendum, but switched to the “Oui” side for the 1995 referendum, though “Oui” only won 56% to 44%.

Rayes had been mayor of Victoriaville since 2009, when the post was opened up due to the city's previous mayor, Roger Richard (who had been mayor since 2001) decision to to not run for re-election. Rayes, who had been a mathematics and science teacher, won the 2009 mayoral election with 62% of the vote, defeating his nearest opponent, Éric Lefebvre by over 5000 votes. In the 2013 municipal elections, Rayes was re-elected with no opposition. Before his entry into municipal politics, Rayes had previously run for the ADQ in the 2003 provincial election, losing to the Liberals by just 1200 votes in the riding of Arthabaska.

Unlike many larger cities in Quebec, Victoriaville has no municipal political parties, perhaps the reason for the lack of competitive races on council in the last election. In 2013, residents in three of Victoriaville's 10 wards (districts) had nothing to vote for, as not only was the mayor acclaimed, so were their local councillors. The only competitive race in the city was one of the two districts with no incumbents running. The eight incumbents running for re-election were easily re-elected to their seats.

There are four candidates running to serve as mayor of Vicoriaville until the next municipal elections in 2017. The most well known candidate is easily André Bellavance, who was the riding's Member of Parliament from 2004 to 2005, and served as the Bloc Québécois' leader in the House of Commons briefly in the last parliament. He ran for the party's leadership in 2014, narrowly losing to Mario Beaulieu. Following his defeat, Bellavance left the BQ, and sat as an Independent for the remainder of his term. He did not run in the 2015 federal election, which saw the BQ reduced to a fourth place finish in his riding of Richmond—Arthabaska.

To people in Victoriaville, the next well known candidate is probably Gilles Lafontaine, who was the councillor for Arthabaska-Ouest, a district in the city's southeast, an area of the city which had been in the city of Arthabaska, before it was amalgamated into Victoriaville in 1993. Lafontaine has served on council since winning his seat in 2009, defeating incumbent councillor Donald Dumont by just 46 votes. He was easily re-elected in 2013, defeating his only opponent Charles Boulanger 905 votes to 364. To run for mayor, Lafontaine gave up his seat on council, which may spur on another by-election in the city down the road.

There are two other candidates running, André Guillemette and Simon Roux. Guillemette, a local businessman had previously run for council in 2013 in the Parc-Victoria district, losing to incumbent Marc Morin 677 votes to 485. It was the closest an incumbent councillor came to losing in that election. Roux on the other hand is a political neophyte. He is a 24 year old carpenter, making his first entry into politics.

Due to name recognition alone, I'd imagine Bellavance will probably win, though this prediction is cautioned by my ignorance of small city municipal politics in Quebec. We'll find out who wins for sure when polls close at 8pm.
Posted by Earl A. Washburn at 12:02 PM No comments: 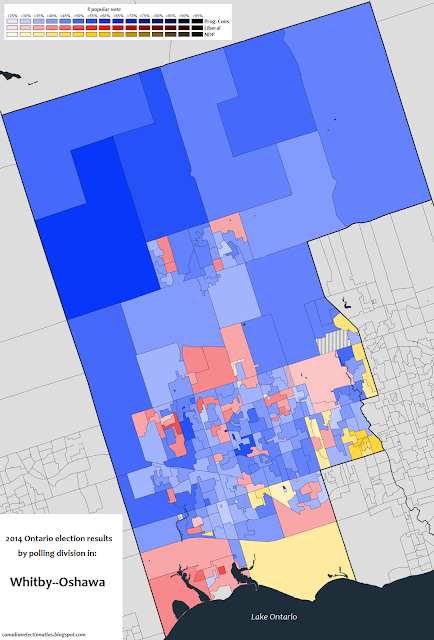