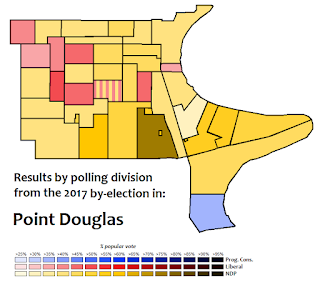 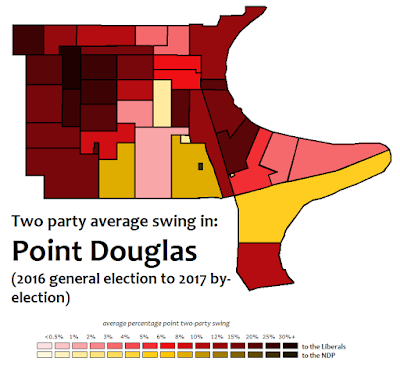 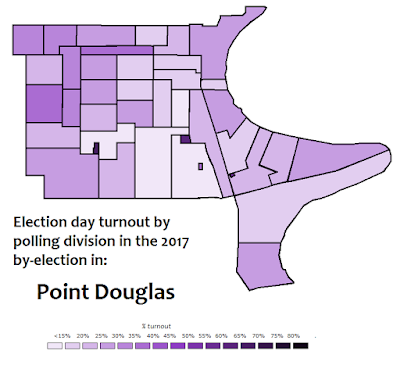 What does this all mean for Manitoba politics going forward? Well, not too much, as both the Liberals and NDP are leaderless at the moment. However, it does expose a potential ethnic cleavage in Winnipeg's north end, which may cut into the NDP's dominance of this working class part of the city. We've already seen the Liberals not only make inroads, but sweep this part of the city in the last federal election. I'm not saying they will do this on the provincial level, but winning over Filipino voters will help the Liberals win a few more seats in the region.
Posted by Earl A. Washburn at 2:54 PM No comments:

Hello readers, it's been a while since my last blog post, due to being quite busy with work, but now that summer approaches, I have a bit more free time to focus on elections across this great country of ours. Of course, summer means a great lack of elections. Oh well. Anyway, those of you who follow me on Twitter will know that I have still been making maps and charts, something that I much prefer over writing, to be honest. It's a lot easier to provide analysis in 140 characters or less! 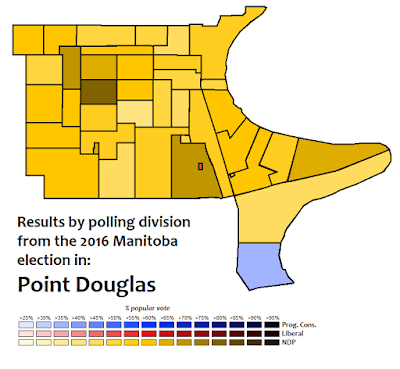 Today, Manitoba is seeing its first provincial by-election since the Progressive Conservatives were swept to power in last year's provincial election. The governing Tories have remained fairly popular over the last year, and enjoy a sizable lead in the polls, thanks to a split opposition, and the fact that both the NDP and Liberals are leaderless at the moment, with both parties set to elect new leaders in the Fall.

Today's by-election is in the riding of Point Douglas, perhaps the safest NDP seat in the whole province. In last year's election, the NDP saw its largest share of the vote out of any riding, when they won the seat with 58% of the vote. In the 2011 election, it was the NDP's second best riding in the province, when 73% of voters backed the party. Most of the riding has voted NDP in every election since the party was created, and for its predecessor the Co-Operative Commonwealth Federation (CCF) before that, going back to when single member constituencies were created in Winnipeg for the 1958 election. Even before that, the CCF would regularly win seats in this part of Winnipeg, which has a long working class history.

Point Douglas is located in Winnipeg's notorious north end, and is named for a bend in the Red River. The Red River forms the eastern boundary of the riding, while the northern boundary is formed by Church Street and the western boundary mostly follows Sinclair Street. The southern boundary follows the CPR Winnipeg Yard, and then follows Main Street south to Lombard Avenue, and then east to the Red River. This diversion creates a bit of a “panhandle” in the southeast of the riding. While this unites all of Point Douglas together, it lumps two very socioeconomically different neighbourhoods together.

The riding is one of the poorest in the province, with most census tracts reporting an average annual income of less than $25,000. One exception is the South Point Douglas area (the aforementioned “panhandle”), which reported an average income of $63,000 in 2010. The riding has a very large First Nations population, as well as a sizable Filipino population.


In the last two elections, the NDP won nearly every single poll in the riding. In 2011 the NDP won all but one poll, and in 2016, the lost just two. In 2016, the Liberals won the Lord Dufferin Park apartments, while the furthest southerly poll has voted for the Tories in both elections. This poll covers the Exchange District and Civic Centre neighbourhoods, located right next to Downtown. In federal elections, Point Douglas usually always votes NDP. However, in the 2015 election, the area switched allegiances en masse to the Liberals, thanks in part to the popularity of Winnipeg North MP Kevin Lemoureux, whose support base had previously been further west in the district. Lamoureux won 62% of the vote in Point Douglas in 2011.

Point Douglas was vacated last January when its MLA, Kevin Chief resigned citing family reasons. He had represented the seat since 2011. Since the riding was re-created in 1990, Point Douglas has continuously been represented by members of the First Nations community, as both Chief and his predecessor, George Hickes are Aboriginals.

The NDP hopes to continue the riding's tradition of electing First Nations MLAs, with their candidate Bernadette Smith. Smith's credentials include pushing for an inquiry into missing and murdered indigenous women, and advocacy for women's and indigenous rights. The Liberals are running John Cacuyaran, a former staffer for MP Maryann Mihychuk. The Tories are running electrician Jodi Moskal, the Greens are running Sabrina Koehn Binesi and the libertarian “Manitoba Party” is running their leader, Gary Marshall.

This should be an NDP hold, but turnout will be a big factor in this riding. The NDP can usually count on the support from First Nations residents in the riding, and it will help that they have an Aboriginal candidate. The NDP's main competition will be from the Liberals, who are notably not running a First Nations candidate. The Liberals' poll numbers are currently just below the NDP in province-wide polling, which would not ordinarily be enough to take this riding, but will be enough to ensure a second place finish, which they did not get in 2011 (but did get in 2016). That is not to say that this riding could not go Liberal in the future, as the federal election results prove that this is more than possible. But provincial politics in Manitoba is much differently aligned than in federal elections, and the provincial Liberal Party is too unorganized to pick this seat up.

Posted by Earl A. Washburn at 3:41 PM No comments: