As you may recall, Patrick Brown, a Conservative backbencher in Stephen Harper's government ran for leader of the Ontario Progressive Conservatives, and won, defeating early frontrunner Christine Elliott, wife of the late Jim Flaherty, Canada's former Finance Minister. Brown's candidacy was originally considered a long shot, but he had a strong campaign, gaining endorsements from people like Wayne Gretzky and Indian Prime Minister Narenda Modhi. After his election, Brown resigned his seat of Barrie in the House of Commons.

After Brown's election as leader of the Ontario Tories, the question turned to who would give up their seat so that Brown could sit in Queen's Park. Barrie was won by the Liberals in the 2014 provincial election, so that was out of the question. The question would linger until July when Simcoe North MPP Garfield Dunlop announced he would resign his seat for Brown. Dunlop was a noted opponent of Brown in his leadership race, so may have resigned so that he didn't have to work under Brown as leader. What was even more helpful for Brown is that Simcoe North is located immediately adjacent to Barrie, the riding he represented in the House of Commons.


Simcoe North is a mostly rural riding located in Central Ontario, north of Barrie. It runs from the Penetanguishene Peninsula abutting into Georgian Bay on the west, to the northern shores of Lake Simcoe in the southeast, and the Severn River in the north. The riding contains three major population centres; Orillia in the eastern part of the riding, and the twin towns of Midland and Penetanguishene in the west. Additionally, the riding contains five townships; Tiny, Tay, Severn, Oro-Medonte and Ramara, plus two Chippewa (Ojibwe) Indian Reserves; Christian island (in Georgian Bay) and Mnjikaning First Nation, home of Casino Rama.


Most of the riding is of British Isles descent (English, Scottish and Irish), with a significant population (one sixth) reporting French ancestry as well. One in ten residents of the riding report having German ancestry. In all, 89% of the riding is White, with most of the rest being Aboriginal (9%). English is the mother tongue of 90% of inhabitants and there is a small residual French population (4%), most of whom live in the historically French community of Penetanguishene and the surrounding peninsula. German is the mother tongue of just over 1% of the population. 72% of the population is Christian, most of whom are Protestants. Just over a quarter of the population is Catholic, and just over a quarter of the population belongs to no religion. The riding is slightly poorer than the province as a whole, with the average individual income being $38,000 while the median income is $29,000 (compared to Ontario which is $42,000 and $31,000 respectively). The leading industries in the riding are Health care and social assistance, retail and manufacturing.


Simcoe North was created in 1996 when the Mike Harris government reduced the number of seats in Ontario to match the ridings used in the federal House of Commons. Simcoe North was mostly created out of Simcoe East, which included both Penetanguishene and Orillia. The remaining part of the riding came from Muskoka-Georgian Bay, which included Midland. Since its first election in 1999, Garfield Dunlop has been the riding's MPP. The riding is generally a safe Tory seat, though Dunlop was never able to win more than 55% of the vote. His lowest share of the vote was in 2014, when Dunlop won 44% of the vote, but was still able to beat the Liberal's Fred Larsen by nearly 6000 votes. Federally, the riding has been Conservative since 2006, and has voted for the Tories for much of its history. 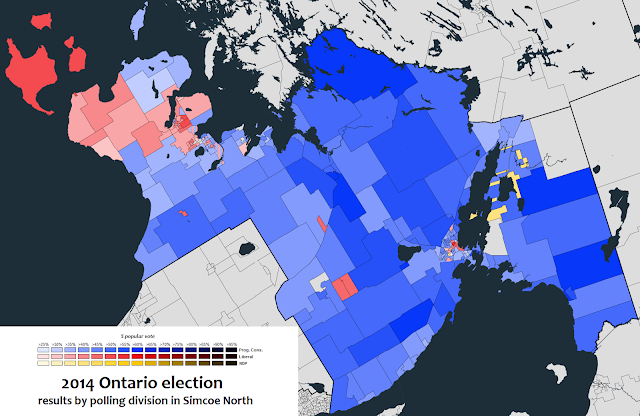 
With Dunlop receiving his lowest ever vote share and the Liberals receiving their highest vote share since 2003 in last year's election, the 2014 election gave us a good map to identify political cleavages in the riding. Dunlop's near-6000 vote victory allowed him to win most polls in the riding, but he only won a majority of the vote in one municipality (Severn). He was strong in most of the rural parts of the riding, winning 49% in Ramara, 48% in Oro-Medonte, and 44% in Tay. His weakest township was Tiny, where he won 38% of the vote. He was weaker in the urban areas, but still managed to win the most votes in Orillia (41%) and Midland (37%). The Liberals won just one municipality, Penetanguishene, with 41% of the vote to Dunlop's 31%. This Liberals were especially strong on the Penetanguishene Peninsula, home to the region's ancestral Francophone population. The Liberals also won the Christian Island Indian Reserve with 52% of the vote, but the NDP won the Mnjikaning First Nation with 42% of the vote. The Green Party was strongest in Tiny Township, where they won 12% of the vote.


Except for 2011 when Dunlop won nearly every poll in the riding, the Liberals at least are usually able to win the Penetanguishene Peninsula area. In 2003, they also won Midland and parts of Orillia, but these areas swung back to the Tories in 2007. During this time Dunlop has easily won the more rural parts of the riding.

Federally, the Conservatives won nearly every poll in 2011, but prior elections again showed the Penetanguishene Peninsula area vs. the rest of the riding cleavage. In the 2004 election, which was the last time the Liberal's won the seat, they had won every poll in Penetanguishene and Midland, and won most of the polls in Orillia. They even won many of the rural polls in the riding, though most still voted for the Conservatives.


Leaders almost always win the by-elections they run in if they've found themselves outside the legislature, wanting to get in. One notable exception is the 2009 by-election in Haliburton—Kawartha Lakes—Brock which saw PC leader John Tory lose in a close race in a safe conservative seat, which ended his leadership of the provincial Tories. In the past, the Liberals and Tories usually opt to not run against the leader of the other party in these by-elections, but this has not been the case recently.

Opposing Patrick Brown is Liberal candidate and retired teacher and Orillia resident Fred Larsen, who also ran for the Liberals in last year's election as well as in 2011. The NDP is running Elizabeth Van Houtte, a professor at Laurentian Universiy, while the Greens are running coordinator Valerie Powell, who was the federal Green candidate in the 2008 and 2011 elections.

Latest polls have shown the governing Liberals are in third place in Ontario, while the Tories and NDP are duking it out for first place. Considering Simcoe North is generally considered a safe Tory seat, where the NDP is weak, there is little doubt that Brown will easily win the riding, allowing him to enter Queen's Park. The real race will be for second place, between the Liberals and the NDP. The NDP did manage to finish 2nd in the federal election, so it is possible, though they have not finished ahead of the Liberals provincially since 1990 here. However, this riding heavily trended Liberal in 2014 (with a swing of 10%, 9 points ahead of their provincial swing), so the Liberals may just hold on to second place. In the very least, it might give us some indication how the riding might vote in next month's federal election. We'll see for sure when polls close at 9pm.


When the NDP won an historic majority government in Alberta last May, its biggest casualty was then-Premier Jim Prentice. A social democratic party forming government in what is considered to be Canada's conservative heartland was a clear sign that voters were not only sick and tired of 44 years of Progressive Conservative government, they were tired of the perceived arrogance of Premier Prentice. Voters in his riding of Calgary-Foothills disagreed though, and re-elected Prentice, just six months after he first entered the legislature in a by-election. On election day though, Prentice saw the writing on the wall, and resigned his seat in the legislature immediately, despite just getting re-elected, prompting another by-election in Calgary-Foothills. This by-election will mark the first electoral test for the new NDP government, which may be past its honeymoon at this point.

I last profiled Calgary-Elbow in a blog post last year, so I will just take a look recent events in the riding.

The October 2014 by-election was at the height of Prentice's popularity, and he enjoyed and easy 18-point win over his Wildrose opponent, Kathy Macdonald. Prentice won with 58% of the vote, enjoying a 4% two-party swing from the 2012 election. Despite this, the Wildrose Party made some inroads into the new neighbourhoods in the north part of the riding, where they failed to win any polling divisions in 2012. 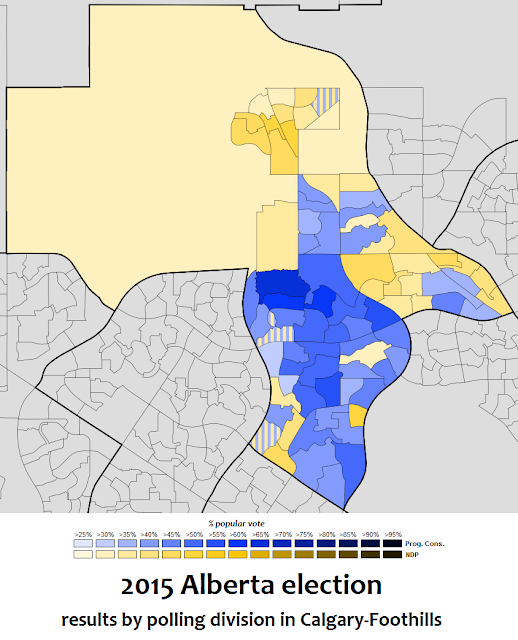 
When the NDP formed government last Spring, Premier Rachel Notley did not have many MLAs with experience from which to choose her cabinet. Including herself, she only named 12 people to the cabinet, and for her, this by-election could be an excellent opportunity to inject some experience into her caucus. The NDP nominated Bob Hawkesworth to be their candidate. Hawkesworth is a former Calgary city councillor, and was an MLA for Calgary-Mountain View from 1986 to 1993. If elected, he would easily be one of the most experienced politicians in the NDP caucus, and thus instant cabinet material.

The candidate with the best chance of beating Hawkesworth is Prasad Panda, an engineer who is running for the right wing Wildrose Party. The PCs will hope to stay relevant in the riding with their candidate, businessman Blair Houston. Despite the fact that the Tories won this seat in the general election, they are still in rebuilding mode as a party. They are not only the third party in the Alberta legislature, they are in third place in the most recent province-wide poll, conducted a few months ago. While the Tories are a better fit in this well-off riding, it stands to reason that its right of centre vote will coalesce behind Prasad, to defeat Hawkesworth. It helps that the combined right wing vote was 58% in the general election. The Liberals and Alberta Party are also running candidates, while the Greens are running their leader, Janet Keeping.

A Mainstreet poll from mid-August showed Prasad at 29%, Hawkesworth at 26% and Houston at 20%. Since then, it is possible that the PC vote could have shrunk even lower, which could benefit Prasad the most. The poll does confirm that this race will be between the Wildrose and NDP.

While a loss for the NDP would be a blow for the government, it shouldn't be seen as too much of a problem, considering the riding's demographics. It is firmly a wealthy, right of centre riding after all. A loss for the PCs would be more painful, as it might be the beginning of the end for the party, as conservative Albertans might look more towards Wildrose as the conservative alternative to the NDP. A loss for the Wildrose Party wouldn't be the end of the world for them, but it is their seat to lose at this point. With a healthy lead in the polls, they should be able to take it.