Provincial by-elections will be held in two Quebec electoral districts today to replace two Quebec City-area Members of the National Assembly (MNA). The ridings being vacated are Chauveau, north of Quebec City and Jean-Talon, located in the city's west end. Chauveau was vacated in April when its MNA, Gerard Deltell of the centre-right Coalition Avenir Quebec (CAQ) announced he would be running for the federal Conservatives in this fall's federal election. Jean-Talon was vacated when its MNA, Liberal Yves Bolduc resigned in February following controversy when he, in his capacity as the province's education minister defended a policy which allowed a school administrator in the city to strip search a 15 year old student.

While neither riding is held by the sovereigntist Parti Quebecois (PQ), it will be the first test for that party since its election of media mogul Pierre-Karl Peladeau as leader in May. Despite some considering his candidacy and media presence in the last provincial election as having cost the party the election, the PQ has seen a boost in the polls since Peladeau's election as leader. The PQ is now up eight or nine points since last year's general election, while the Liberals are down about 10 points, and the CAQ is down about three points. Both Chauveau and Jean-Talon are safe ridings for their respective parties, but a two-party Liberal to PQ swing of 10 points in Jean-Talon might put that riding into play.


Like many provincial ridings in Quebec, Chauveau is not named for its geography, rather it is named for a person, Pierre-Joseph-Olivier Chauveau, the first Premier of Quebec who also represented the region during his time in office. Applying a single geographic name to this riding would be challenging, as it covers a number of different communities north of Quebec City.

Most of the population of the riding lives in a number of suburban communities within the city limits of Quebec City. It contains most of the borough of La Haute-Saint-Charles (including the neighbourhoods of Loretteville, Saint-Emile and Lac-Saint-Charles) as well as the neighbourhood of Note-Dame-des-Laurentides in the borough of Charlesbourg. The riding also contains the Wendake Indian Reserve, which is completely surrounded by La Haute-Saint-Charles borough. From the Quebec City suburbs in the south, the riding runs northwest into the Quebec hinterland, containing the municipalities of Lac-Beauport, Lac-Delage, Stoneham-et-Tewkesbury and the uninhabited Lac-Croche unorganized area, which makes up the northern two-thirds of the riding's geographic territory.


Being located in suburban Quebec City, Chauveau is much more conservative leaning than the rest of the province. Right of centre parties have held the riding continuously since 2007. While the riding supported the Yes side in the 1995 referendum by nine points, the riding's conservative leanings have allowed the Liberals to win here before the emergence of more right leaning parties in the last decade. Since 2007 though, it has been a safe ADQ/CAQ seat. The riding was one of only seven to vote for the ADQ in the 2008 provincial election. 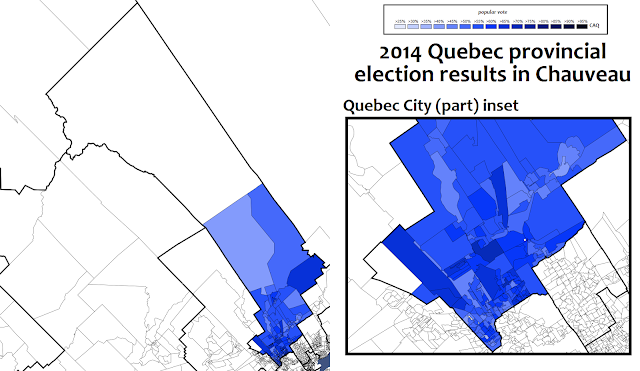 In last year's provincial election, Deltell won the seat easily, by nearly 10,000 votes, winning 52% of the vote to the Liberal's 30%. If we just look at the election day votes, Deltell won every single polling division in the riding. In fact, he won a majority of the election day votes in every neighbourhood of the riding, winning as much as 62% in Saint-Emile, while his worst community was Lac-Beauport, where he still won 53% of the vote. The advance and special votes in the riding made the total election results closer. Deltell only won 42% of those votes, to the Liberal's 39%. The strongest community for the Liberals was the Wendake Indian Reserve, where they won 35% of the vote. The strongest area for the PQ was Lac-Delage where they won 20% of the vote. Lac-Dalage was also the best community for the left wing Quebec solidaire, where they won 8%.

The CAQ won every single poll in the riding in 2012 as well, when Deltell won by an even larger margin of 12,500 votes over the Liberal candidate. In 2008, when Deltell only won by 2600 votes, the Liberals were able to win a few more polls, such as those in Wendake and in Lac-Beaport. The PQ also won a few polls.


Federally, Chauveau covers parts three ridings: Louis-Saint-Laurent, Charlesbourg—Haute-Saint-Charles and Portneuf—Jacques-Cartier. Due to the area being fairly homogenous, most of Chauveau votes the same way in each election. In 2011, most of the area went NDP, with a splattering of Conservative polls in suburban areas like Loretteville, which is in the more Tory-friendly riding of Louis-Saint-Laurent. In 2006 and 2008, most of the area voted Conservative, except the area in Portneuf—Jacques-Cartier which backed libertarian leaning Independent Andre Arthur. In 2004, most of Chauveau backed the Bloc Quebecois.


The CAQ, Liberals and the PQ are all running journalists as their candidates. The CAQ is running Jocelyne Cazin a former television host on TVA, who has been criticized for having been parachuted in by the CAQ to run in this safe seat. The Liberal candidate, Veronyque Tremblay actually lives in the riding, and is known in the area for working at a popular local radio station. The PQ candidate is Sebastien Couture, who is the chief reporter of a monthly newspaper which serves the northern rural parts of this district. Quebec solidaire is running educator Marjolaine Bouchard. The Conservatives, Option nationale and two other minor parties are also running candidates.

Despite not living in the riding, the clear front runner has to be Jocelyne Cazin of the CAQ. It does not get much safer for the centre-right CAQ than in Chauveau. I expect them to take a hit in the polls, but should get no lower than the 43% the ADQ (the CAQ's predecessor) won here in 2008. The Liberal vote could take a hit here as well, if the province-wide polls are to be believed. The PQ will likely see a large boost, but they are only starting from the 12% they won in 2014. I expect both parties will be in the low to mid 20% range. If the PQ is lucky, they might even finish second.


Further south is the riding of Jean-Talon, named for the 17th century colonial administrator of New France. The riding, with its present boundaries is located in the west end of the city, in the Sainte-Foy—Sillery—Cap-Rouge borough. The riding contains the neighbourhoods of Cite-Universitaire (surrounding Laval University), Plateau, Saint-Louis, Sillery and part of Pointe-de-Sainte-Foy. The riding is much more urban than Chauveau, as it just covers the inner-suburbs immediately west of Quebec City's downtown.

Jean-Talon's political history is noted for being a Liberal bastion. Jean-Talon has never elected an MNA from any party except for the Liberals. Counting the predecessor riding of Quebec-Ouest, the riding has voted Liberal continuously since 1952. The PQ has had more success in Louis-Hebert during the time it mostly covered what is today Jean-Talon. It had PQ representation from 1976 to 1982 and from 1994 to 2002.

Despite the riding's overwhelming Liberal history, they PLQ does not win this riding by huge landslides in every election. In 2014, Bolduc won the seat comfortably with a 7700 vote margin, but did not win a majority of the vote, getting just 45%. In 2012, the race was much closer, with Bolduc winning by 3500 votes and winning just 37% of the vote. The last time the Liberals won a majority of the vote here was in a 2008 by-election, where Bolduc won 58% of the vote. The race in this district has always been between the Liberals and the PQ. Neither the ADQ nor the CAQ have been able to place second here, although they have come close to finishing second in the last two elections. 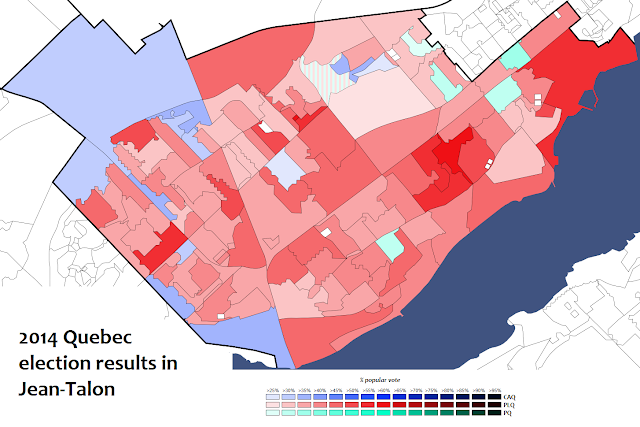 
In the 2014 election, Bolduc won nearly every poll in the riding. The PQ did win five polls (and tied another), four of which were located near the eastern border of the riding, close to the PQ-held riding of Taschereau. The CAQ won 12 polls, nine of which were located in the more suburban western part of the riding, west of Autoroute Henri-IV. The Liberals were strongest in Sillery, where they won 43% of election day votes. Their worst neighbourhood was Cite-Universitaire, where they won 38% of the votes. Interestingly, the best neighbourhood for the PQ was also Sillery (23%), while the best neighbourhood for the CAQ was the Plateau (27%). For Quebec solidaire, their best neighbourhood was Cite-Universitaire, thanks to the student population. Election day votes varied greatly from the advance and special votes, where the Liberals won a majority of the votes. In 2012, both the CAQ and PQ won many more polling divisions. While the Liberals won across the riding, the PQ saw most of its support east of Autoroute Henri-IV, while the CAQ saw most of its support west of Autoroute Henri-IV.


In Federal elections, Jean-Talon is located in the riding of Louis-Hebert. In 2011, the NDP swept the area, winning nearly every poll. In 2008, the Bloc won most of the riding. In 2006, when the Tories won Louis-Hebert by just 231 votes, Jean-Talon mostly supported the Bloc. In 2004, the area was divided between the Bloc and the Liberals, with the former mostly winning in the Sainte-Foy parts of the riding, and the latter winning in the Sillery part.


Considering Jean-Talon's political history, it is unlikely that the Liberals will lose this seat. However, the by-election will make for a good test to determine the popularity of Pierre-Karl Peladeau as leader of the PQ. The Liberals for their part have a strong candidate in Sebastien Proulx, the former ADQ MNA for Trois-Rivieres from 2007 to 2008. The PQ is running businessman (Vice president of De Marque Inc.) Clement Laberge against him. The CAQ candidate will be businessman Alain Fecteau (President of International Geo Alliance) while Quebec solidaire will be running businesswoman (President of Plan B Entertainment) Amelie Boisvert. The leader of Option nationale Sol Zanetti is also running, as are the Conservatives, the Greens, and three minor parties.

Polls close in both ridings at 8pm.
Posted by Earl A. Washburn at 5:36 PM No comments: