This past weekend, Forum Research published the largest poll in Canadian history for the provincial election in Ontario. 40,000 people were polled, asking which party they were supporting. This poll was so large, individual riding results were also published within a certain degree of accuracy.
For this projection, I will only be looking at this particular poll, due to the fact that there is no way you can get more accurate than 40,000 respondents- the margin of error was just 0.5%. The results of the poll are quite interesting; it showed an exact tie between the Tories and the Liberals at 35%, with the NDP trailing not too far behind at 23%. The Greens meanwhile are at a respectable 6% province wide.
Looking at individual ridings, according to Forum Research these numbers translate to 47 seats each for the Liberals and Tories and just 13 for NDP. This is where the errors comes in. With a tie vote, the Liberals should have the edge in seats, but they don't. This can be explained by large rural swings against them, which I factored into my projection. But one statistic that doesn't sit right is the 13 seats for the NDP. That would mean a net increase of just three seats on a swing of 6%. This seams ridiculous considering the party was able to win 17 seats on just 18% of the vote in the 2008 federal election. But who knows, perhaps the party is doing well, but not in any concentrations.
The report published in the Toronto Star indicated that there were 28 seats within 5% of the vote, but didn't say who was leading or in second place in them. They were: Ancaster—Dundas—Flamborough--Westdale, Beaches--East York, Bramalea—Gore—Malton, Brampton—Springdale, Halton, Kitchener Centre, Kitchener—Conestoga, Kitchener—Waterloo, London North Centre, London West, Mississauga East, Mississauga—Erindale, Mississauga South, Niagara Falls, Oak Ridges—Markham, Ottawa South, Pickering--Scarborough East, Richmond Hill, St. Catharines, Thornhill, Thunder Bay—Atikokan, Thunder Bay--Superior North, Timmins--James Bay, Trinity—Spadina, Welland, Windsor—Tecumseh, Windsor West and York Centre.
Some of those seats make sense, but others are quite odd, like McGuinty in danger of losing his seat in Ottawa South, or the NDP at risk of losing Timmins—James Bay. Additionally, there are some notable absences from this list, like my own riding of Ottawa Centre. Some of the individual riding sample sizes are quite low however. Timmins—James Bay had just 54 respondents in the poll.
Sunday morning I looked for some individual riding numbers, and found some for the Greater Toronto Area. Looking at the map found that most ridings seemed to be accurate, but there are a few oddities. Specifically, how poor the NDP seems to be doing in Toronto, despite polls from earlier last week showing the party was doing better than they were at federally. Forum Research has the party losing Parkdale—High Park surprisingly, and in danger of losing the two strongholds of Trinity—Spadina and Beaches—East York. Also, the party is way behind in York South—Weston, despite some indications of a strong NDP campaign there. Also, the Tories being ahead in two Brampton ridings is a bit of a surprise, considering I would have expected other ridings to go first. I suppose many Indo-Canadians are warming up to the provincial Tories at the expense of the Liberals.
I also found some numbers from Bruce, Grey and Simcoe Counties. The big surprise here is the collapse of the Liberal vote in Huron—Bruce which is part of the reason why I suspect the Liberals are way behind in their rural seats.
And so, I am left to make a new projection from all of this. I didn't just copy and paste the poll numbers into the ridings, but I did make some adjustments where I could find the numbers. Some wonky ridings I nearly ignored completely, but then again, it's possible the polls are correct about those seats. I will be taking a close look at these seats in the next week and a half before election day.
Seat by seat projection
Seat changes since last projection
The Tories were the main beneficiary of this projection, gaining six seats in my theory that they are winning all of the rural Liberal seats. These are Huron—Bruce, Lambton—Kent—Middlesex, Northumberland—Quinte West, Perth—Wellington and Prince Edward—Hastings. Also, the absence of Ottawa West—Nepean on that close race list means that I believe it is firmly in the Tory column as well, making it the sixth Tory gain. Three of those Tory gains were from projected toss up seats. The NDP also gained on seat in this projection, in Algoma—Manitoulin (from toss up). Brampton—Springdale and Ottawa—Orleans are new toss ups, as those previously Liberal projected seats are now close races.
Conclusion
While I didn't come up with a tie in seats like Forum Research did, I did get a close result. Either the Tories or the Liberals can win this, but it will be a minority. The Tories are presently two seats behind. Even though I shifted many Liberal seats into the Tory column, I still couldn't get to the number provided in the forum research poll. And, I have no idea where they have the NDP gaining seats, but I suspect their low sample sizes in the north have meant that their numbers weren't too NDP friendly. In any event, I have the NDP winning at least 17 seats, not 13. And they will be holding the balance of power. 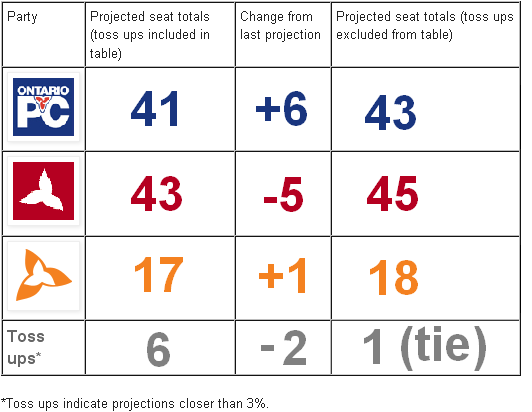 Of course, there is bound to be some oversights on my part. If you think I have a riding wrong, please let me know. I want to get this as right as possible. The key to making correct projections is not all about the math. Rather, it's about the local conditions. That's why I will be looking at qualitative data just as much as I will be looking at quantitative.
Posted by Earl A. Washburn at 12:47 AM