A second poll has come out during the Newfoundland and Labrador election campaign, and it shows the beginnings of an NDP surge in the province, but with the Tories still firmly in landslide majority status.
A poll done my MQO Research this past weekend has the Tories still with a majority of popular support at 53%, the NDP firmly in second now at 29% and the Liberals trailing in third at 18%. The last poll (conducted by Corporate Research Associates) we saw from August, had the numbers at 54-24-22.
Unfortunately there are no regional breakdowns for any of these polls, and considering Newfoundland is such a diverse province geographically, I can only make guesses with my projection. I suspect much of the NDP surge is coming from the St. John's area, where they hold both federal seats. This is the same area where the Tories won massive majorities in the last provincial election in 2007. Even with the NDP polling much higher, these numbers will be hard for them to overcome. I'm not too familiar campaigns there, but if things are looking good for the NDP, the party can make some pick ups.They do have some strong candidates.
Riding by riding projections:
Conclusion
Not much has changed in this projection, despite the new NDP surge. The NDP support is not concentrated heavily enough in any seats to help them win many more, but we must keep a close eye on the St. John's area. So far, I only have them picking up Burin-Placentia West from the Tories, but it's still in the toss up zone. However, they are inching closer in some St. John's seats. The Liberals meanwhile would still form official opposition thanks to concentrated strengths in a number of seats. In this projection they have lost Bellevue and Bay of Islands, and there is now a tie in St. Barbe. All of these seats are still in the toss up zone, and aren't reflected as changes in the below chart. The only change there was the Torngat Mountains which have been removed from the toss up category and put into the Tory one.
For those keeping track, the NDP would need to win six more seats to get opposition status. They would have to gain St. John's East, St. John's Centre, Lake Melville, Grand-Falls-Windsor-Buchans, Conception Bay East-Bell Island and Bellevue. And that would still require a 10 point swing! However, with very little knowledge at this point, anything can happen. 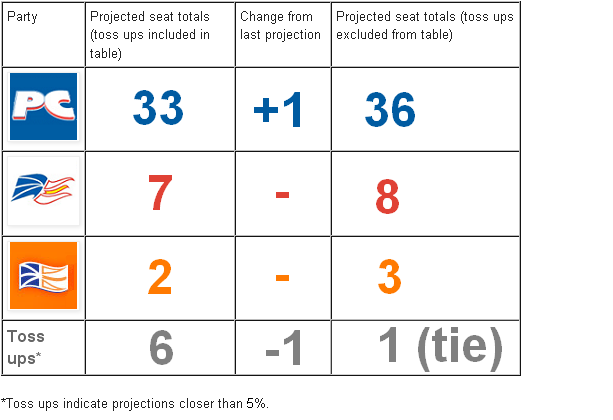