In just two weeks, Canada's smallest province, Prince Edward Island will be going to the polls. And, I have yet to write up a projection for the province which will be going to the polls on Thanksgiving, October 3. It will be the first provincial election of the Fall.
Background
The Liberal Party under Premier Robert Ghiz remains extremely popular in the province. The party's only opposition in the legislature is from the Progressive Conservative Party, led by Olive Crane. The Tories won just 4 seats in the last election in 2007, and have been polling lower than their 41% mark set then ever since. The question appears to be whether or not the Liberals can win every seat in the legislature. This has not happened since 1935. The province, being as small as it is is prone to massive swings in one direction or the other, and parties have routinely won nearly every seat in the legislature. Close elections are not the norm on the island and it has not been since 1996 since an opposition party has won more than 5 seats and it has not been since 1986 since an opposition party has won more than 10.
The most recent poll of island residents was conducted in August, and saw the Liberals with 59% (up 6 from the 2007 election) of support, 31% for the Tories (down 10%), 7% for the NDP and 3% for the Greens. The new populist “Island Party” will also be contesting the election, but was not polled. They will remain the wild card. The NDP is trying to rebound from its 4th place performance in 2007, but will be hard pressed as it is running one fewer candidate (14). The Greens, which finished third in 2007 are running 22 candidates, up four from 2007. The Island Party is running 12 candidates. There are 27 in total.
Ridings to watch 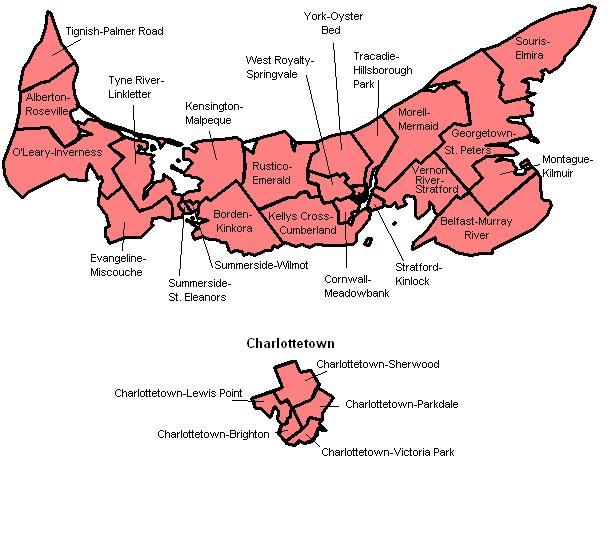 With the Liberals polling so high, there will be few races to watch in this election. The Liberals are sure to be the strongest in Queens County, which is the central part of the Island (including Charlottetown). The August poll conducted by Corporate Research Associates poll showed that the Liberals have a 32% lead there, which is about 14% more than the last election. In Prince County, in the west, the Liberals have a 15% lead, which is about the same as the last election. This area is represented by Conservative Gail Shea in the federal House of Commons, and may be why the Tories are holding their own here. In the more conservative Kings County, in the east, the Liberals and Tories are tied. This is the only part of the province where the Tories won seats last election. If these numbers are true, then it is unlikely the Liberals will be able to sweep the province. And so, the only races to watch will be in Eastern Prince Edward Island it seems.
While they won 4 seats in the last election, the Tories only hold 2 at present. And only one incumbent is running for re-election. That is Olive Crane in Morrel-Mermaid. She won the seat by 15% in 2007, and is likely to hold on to it. Montague-Kilmuir is the only other seat the Tories presently hold. However, MLA Jim Bagnell is retiring. He only won the seat by 134 votes in 2007, and now that is vacant, it will be ripe for the picking. Georgetown-St. Peter's was vacated back in March when its MLA, Mike Currie ran for the federal Tories. He had won the seat by 9% points, and will be high target for the Liberals. And finally, the fourth seat the Tories won in 2007 was Belfast-Murray River. It was won by Tory Premier Pat Binns in 2007, but he resigned the seat later that year, only to have it filled by Liberal Charlie McGeoghegan. The Tories could pick the seat back up however, as they are polling higher than when McGeoghegan won his seat. The Tories may also have a shot at some seats in Prince County, but it is unlikely. Their best shot is Alberton-Roseville where they lost by just 123 votes.
What about the other parties? Well, the NDP has only won one seat ever on the island, in 1996. While they are polling close to where they were in 1996, with just 15 candidates, the party will likely be seen as too disorganized. If you compare the federal election to the provincial ridings however, the NDP could have a shot at Charlottetown-Victoria Park, Charlottetown-Parkdale or Charlottetown-Sherwood, where they won quite a few polls. However, the Green Party leader Sharon Labchuk is running there, and she may cut into the NDP's votes. The NDP leader, James Rodd is running in York-Oyster Bed. In the federal election, the NDP candidate did fairly well in the area, getting as high as 25% in one poll. A well run campaign could give him 20% of the vote.
Projections
Conclusion
The Liberals should easily win a massive majority. The Tories however, will probably win at least one seat (Morell-Mermaid). Whether or not they can win another is the real question. As of right now, I'd have to say no. 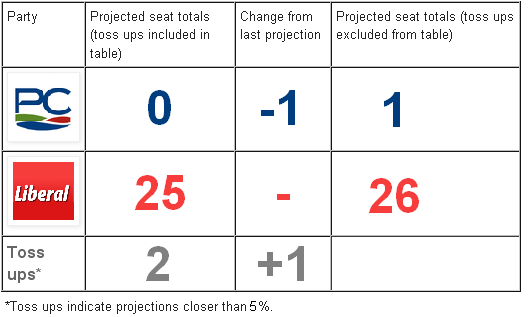