The province of Newfoundland and Labrador will also be going to the polls this fall. Their election date is set for October 11. And now that there has finally been another poll released in the province, I can do my first official projection for Canada's youngest province.
Corporate Research Associates released a poll Tuesday indicating that very little has changed since previous poll from last May. The poll, which was conducted from August 15-31 indicated the following,
Prog. Cons.: 54%
NDP: 24%
Liberal: 22%
Despite still having the support of a majority of voters, the Tories are actually polling their worst since probably before Danny Williams was leader. The NDP likewise is in all likelihood at their highest polling numbers ever.
Background
Popular Tory Premier Danny Williams resigned at the height of his game last December. Williams was first elected in the 2003 election with a large majority of the vote (59%). His popularity was so high, that he won the 2007 election with the highest popular vote percentage in Canadian history, with 70% of th vote! It's a wonder how his party didn't win every seat in the Newfoundland and Labrador House of Assembly. Somehow the Liberals won 3 seats and the NDP won 1. The Tories won 44. Despite Williams leading the provincial Tories, he hated the federal Tories. His “Anybody But Conservative” campaign in the 2008 federal election helped shut out the Harper conservatives on the rock. The Tories did come back in 2011 by winning Labrador, but were still shut out on the island.
Williams was replaced by Newfoundland's first female Premier, Kathy Dunderdale. Despite slipping in the polls, her party is still well in the lead. We were bound for having an all-female leader election this Fall, but it was not to be. Liberal leader Yvonne Jones had to step down last month due to cancer, and the Liberals quickly elected former MHA (Member of the House of Assembly) Kevin Aylward to lead them into the election. The NDP, which currently holds 2 seats in the Canadian House of Commons in the province is led by former nun Lorraine Michael. Her seat is the only one held by the party in the House of Assembly.
Races to watch 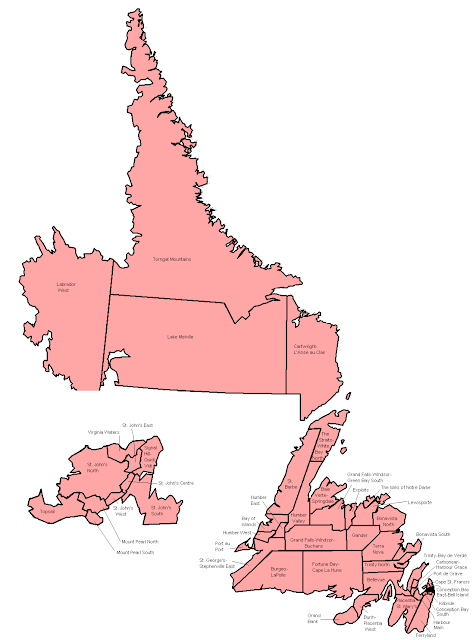 Labrador
It appears that every riding in Labrador will be interesting to watch come election night. Cartwright—L'Anse au Clair is probably the only sure bet, as it has always voted Liberal. The only question is how will Yvonne Jones fair there after she stepped down as Liberal leader due to cancer. Labrador West has been a riding that has flipped between all three parties in recent elections. Tory MHA Jim Baker is stepping aside, creating a showdown between the Tories and the NDP here. This riding is the NDP's best shot at a second seat in the province, having only lost it by 400 votes in 2007. This part of Labrador also went NDP in the federal election. Lake Melville will be an interesting race because Tory MHA John Hickey is stepping down. This seat is historically Liberal, but Hickey benefited in the 2003 election on a vote split with the Labrador Party helping him win his first race. Finally, up in the Torngat Mountains, Tory MHA Patty Pottle will be in a fight with the Liberals. She won her 2007 race by just 76 votes.
St. John's & the Avalon Peninsula
The Avalon Peninsula is the more Tory friendly part of the province. Interestingly, this is also the area that has gone NDP federally as of late, due to disaffected federal Tories making their switch to the NDP. Perhaps an unlikely choice, but when you've never voted Liberal in generations, why start now?
This part of the province was the best area for Danny Williams, as his Tories racked up massive majorities in most seats. The question is whether or not the NDP can make some inroads here, like they did provincially.
The NDP's lone seat in the province is Signal Hill-Quidi Vidi. The seat has been held by the party since 1990 when former provincial NDP leader (and current MP) Jack Harris won it. The race has been close in recent elections, and current MHA and leader Lorraine Michaels may be in a tough race against the Auditor General of the province, John Noseworthy, who is running for the Tories.
The other St. John's seats were won by overwhelming margins for the Tories in 2007, none lower than 70% of the vote. Only one incumbent is retiring, Sheila Osborne in St. John's West. She got 73% of the vote last time, and it's unlikely the Tories will lose it now.
The Tories won more massive majorities in the St. John's suburbs. Only one seat is open, as Dave Devine is retiring in Mount Pearl South. Considering he won with 84% of the vote in 2007, this one should stay Tory!
The only Liberal seat on the Avalon peninsula is Port de Grave. This seat has been Liberal for all by 7 years since the province joined confederation, and has been Liberal since 1985. MHA Roland Butler will be retiring however, making this seat an interesting one to watch, as he had only won by less than 300 votes in the 2007 election. All other races on the peninsula should be easy Tory wins.
Rural Newfoundland
Outside of the Avalon Peninsula has been traditionally more Liberal in the province. Having said that, the Liberals hold just 2 seats in all of this area, and won only one in the last election. However, if they are to make gains, it will most likely be here.
Some seats the Liberals could pick off include Bellevue (where Tory Calvin Peach won by 800 votes in 2007), The Isles of Notre Dame (where Tory Derrick Dalley won by just 7 votes), Bay of Islands (where Tory Terry Loder defeated the Liberal MHA Eddie Joyce by 400 votes. They will be in a rematch), and Humber Valley (which will be another rematch of last election where Tory Darryl Kelly defeated the sitting MHA, Dwight Ball by 300 votes). Also, recent by-elections in the area have also shown that the Liberals should be targeting other seats, such as St. Barbe. Former Liberal leader Jim Bennett is running again there in a seat he lost by 900 votes in 2007. The Liberals came within 400 votes of winning a 2008 by-election in Baie Verte-Springdale, and 700 votes from winning Terra Nova in 2009. Also, we musn't forget the riding Liberal leader Kevin Aylward is running in, St. George's—Stephenville East. He will have an uphill battle, as the Liberals were 50% behind in the 2007 election. The Liberals had picked up just one seat in a by-election during the last legislative session. Marhsall Dean won the seat for the Grits in 2009. Benefiting from a large 19% swing, he beat the Tory candidate by just 126 votes. The only other Liberal seat in the area is Burgeo-LaPoile. This Liberal stronghold should continue to go Liberal, despite the retiring of its incumbent, Kelvin Parsons. His son, Andrew will be the party's candidate in the riding that has been held by the Tories for just 7 years since 1949.
Meanwhile, the NDP will be setting its sights at Burin-Placentia West. Their candidate is Julie Mitchell, who ran and lost by 1,400 votes in 2007 to Tory Clyde Jackman. With the NDP doing much better in the polls, she is sure to have a shot at the riding. This appears to be the party's third best hope in the province.
The Tories will just have two retiring incumbents in the area. Bonavista North and Bonavista South. The Liberals may have a shot at the north riding, where Harry Harding is retiring. This seat has voted Liberal for most of its history, but the Liberals lost by 1,500 votes in 2007. In the south riding, Rodger Fitzgerald is retiring. He was acclaimed in 2007, meaning it will be hard to guage how well the Liberals will do. It has been a Tory riding since 1993 however, and Fitzgerald won by 3,300 votes in his last contested election of 2003.
Riding by riding projections:

Conclusion
Even though the Liberals were stagnant in the most recent poll, they have really benefited from the decrease in the popularity of the Tories. While they are now in third place in the polls, they are projected to win at least 7 seats. I have made a guess that the Liberals will be doing well in the western part of the province, which is the region which saw some good by-election results, and it the traditional home turf for the party. Also, their leader is running there, although I project he will lose his seat. This was also the area of PC Premier Danny Williams. Now that he is out of the picture, the inflated Tory vote will be deflated. The Liberals are also benefiting by having the edge in a number of close ridings.


I predict that much of the Tory vote will be concentrated in the eastern part of the province, which is where they have done well historically, and recently. The Liberals will finish in a distant third place in the region. I expect the NDP to do very well here, but will not win any more seats than they have already, because they wont be able to catch up to the massive Tory majorities. That's why they are still looking at two seats, despite being in 2nd place in the polls. In fact, their next best shot is the riding of Burin-Placentia West, which is not even in the St. John's area. Without any real “star candidates”, the NDP wont be able to pick up many seats. 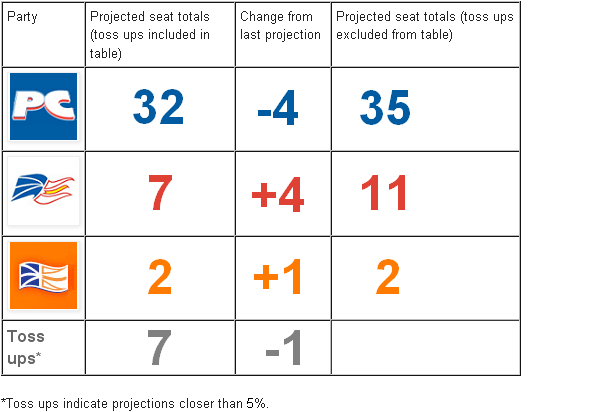 Email ThisBlogThis!Share to TwitterShare to FacebookShare to Pinterest
Labels: Newfoundland and Labrador, Predictions