As the writs are about to be dropped in Ontario, it is time to do my final prediction before the official campaign begins. A lot has happened since my last prediction 2 weeks ago, as the campaign heats up. The biggest event of this period has to have been the death of federal NDP leader Jack Layton. Some are attributing his death to a sympathy bump for not only the federal party (which in a recent poll of federal voters, is now tied with the Conservatives), but also for the provincial party.
My last projection showed the NDP at its lowest level since March. However, two recent polls have shown a rebound for the party. The two polls were conducted earlier this week by Forum Research and Angus Reid. Forum Research has the NDP at 26% while Angus Reid has the party at 24%. The party is still in third place in both polls, but the race between the three parties is beginning to narrow. Angus Reid has the Tories at 38%, the Liberals at 31% and the Greens at 6%. Forum Research has the Tories a bit lower at 35%, the Liberals are at 30% and the Greens at 7%. Both polls confirm that the Tories are polling lower than they were earlier in the summer when they were in the low 40s, meaning a minority government is becoming more and more likely.
I am basing this projection on an average of both polls, but rounding up to favour the Forum Research poll which polled twice as many people as Angus Reid. Future projections will be using averages as well. I hope to come out with a new Ontario projection. However, I will be busy with other work during the campaign, which could limit my posts.
Methodology/disclaimer
Once again, I should mention how I am coming to my conclusions,
(From my early August projection)
I have looked at each riding individually and tried to figure out what its voters might do in the upcoming election. For this, I looked at the riding history, and tried to come to a conclusion as to why certain parties did as well they did, or as poor as they did compared to other years. For certain ridings, I assumed a uniform swing, because I felt its historical voting trends follow the provincial voting trends. For other ridings, I looked at the results of the recent federal election and adjusted the results to reflect the most recent poll. And for other ridings, I could only make estimates, again using past election data. It all depended on the character of the riding.

Of course, there is bound to be some oversights on my part. If you think I have a riding wrong, please let me know. I want to get this as right as possible. The key to making correct projections is not all about the math. Rather, it's about the local conditions. That's why I will be looking at qualitative data just as much as I will be looking at quantitative.
Seat by seat projection
Seat changes since last projection
Both the Liberals and the Tories lost support in the last two weeks, almost evenly, with the Liberals suffering slightly more. That is why there were not many seats projected to go from the Liberals to the Tories. Most of the projection changes involved seats projected to go to the NDP or to toss up.
The Liberals are down six seats in this projection. Brant, Ottawa—Orleans and Willowdale are all now toss ups with the Tories. Scarborough Southwest is now a toss up with the NDP, while London—Fanshawe is now a three-way toss up. Thunder Bay—Superior North has been shifted from the Liberal column all the way to the NDP's.
The Tories are down two seats in this projection. Both Kenora—Rainy River and Welland are now projected to go NDP, instead of PC.
Finally, 7 former toss up ridings are now projected to go NDP. These are Algoma—Manitoulin, Hamilton East—Stoney Creek, Hamilton Mountain, Ottawa Centre, Thunder Bay—Atikokan, Timiskaming—Cochrane and York South—Weston.
Conclusion
The NDP was the big beneficiary of this projection, gaining ten seats from two weeks ago. In addition, they are now tied in Scarborough Southwest and are in toss up range in London—Fanshawe, putting their maximum at 21. This NDP surge has made a minority government situation all but inevitable at this point. The Tories have the projected seat lead, looking at a minimum of 37 seats and a maximum of 56 seats (factoring in 19 of those 20 toss ups). 57 seats would give them a bare majority. The Liberals are outside of being able to win a majority at this point, with their maximum at 51 seats (minimum is at 31).
The Toronto Star has said that this race is now a 3-way race, but the NDP is still in third place at the moment. They need to win some of their distant targets to over come the Liberals to form the official opposition. In addition to their 21 maximum, they would also need to win Windsor—Tecumseh, Sudbury, Scarborough Centre, Oshawa, Essex and Bramalea—Gore—Malton to tie the Liberals at 27 seats. They are projected to be within 10% in those seats. 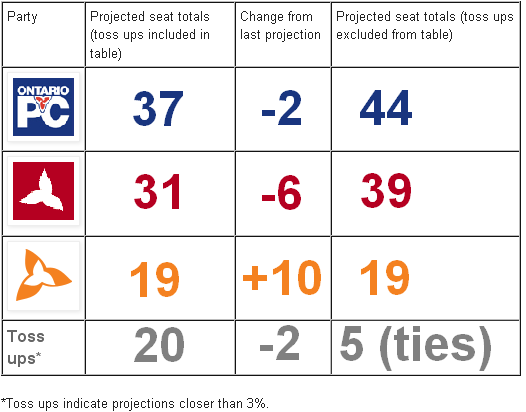