Prince Edward goes to the polls today, and so it's time for my final projection for the province. There have been few polls of the province during the campaign. The most recent one was released on Thursday, and so that will be what my projection will be based on.
The poll, conducted by Corporate Research Associates was quite large for PEI standards, with 700 respondents. Unfortunately, unlike the poll before it, I have not been able to find any regional numbers, so I will have to make some guesses on that front.
The polls shows that the Tories are up 5 points to 36%, while the Liberals are down 6 points to 53%, the same mark they got in the 2007 election. The NDP and the Greens are now tied with 5% each. This increase for the Tories means that some seats are now in play for them. My guess is that much of this gain occurred in Prince and Kings counties. Kings is the only place where the Tories won seats last time. However, it's possible with the current numbers to win in Prince County. Alberton-Roseville was close last time, and if the Liberals are down in Prince like I think they might be, that particular riding is in play. However, I could be way off base.
Let's look at my projections:
Projections
Predicting the toss ups
Alberton-Roseville:
This riding was the closest in Prince County in 2007, when Alberton mayor Pat Murphy defeated the Tory incumbent, Cletus Dunn by just 123 votes. The riding was also the Tory's best in Prince County in 1996, when the whole region shunned the Tories. It still voted Liberal that year. Dunn won both the 2000 and 2003 elections by comfortable margins. Murphy is facing Tory David Gordon, who does not appear to be a terribly strong candidate. I am fairly certain this riding will go Liberal.
Belfast-Murray River:
This seat was held by former Tory Premier Pat Binns until he resigned in 2007 after his party went down to defeat. The ensuing by-election elected a Liberal, local fisherman Charlie McGeoghegan over businesswoman Darlene Compton. The two will be duking it out again this time. McGeoghegan won the by-election by over 400 votes, a fairly comfortable margin for such small districts, but I expect he will be going down to defeat in this traditionally Tory district.
Georgetown-St. Peter's:
This riding has never voted Liberal since being created in 1996. However, it is an open seat, so it will be one to watch on election night. The Tories won by just 300 votes in 2007. The Tory candidate, Steven Myers is going against the Liberal candidate Kevin Gotell. Due to its Tory history, I do expect the PCs to keep this seat, although it will be close.
Montague-Kilmuir:
Another open seat is Montague-Kilmuir. This seat has also always elected the Tories since 1996. However, the margin was much closer in 2007, with the Tories winning by just 134 votes. I do have the current projection as being a tie, but with the Liberals slightly ahead. The Liberals are running RCMP officer Allen Roach against businessman Greg Farrell of the Tories, two competent rivals. However, I think Roach will win it. The Liberals may not have the history here, but the seat is open and, it was close last time.
Changes since the last prediction / conclusion
I have the Tories winning three seats, two more then my last projection. As mentioned, I now have them winning Georgetown-St. Peter's and Belfast-Murray River.
The PEI election will be somewhat of a snoozefest. It will be interesting to see how many seats the Tories can win, if any at all though. 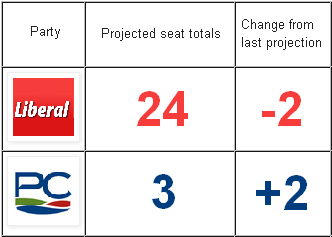 Make sure to follow me on twitter this evening for live commentary. Polls close at 7pm Atlantic (6 Eastern).
Also note, the Northwest Territories will also be going to the polls tomorrow. I will be making a map of that election, but since they use consensus government, the mapping will be different.
Posted by Earl A. Washburn at 12:30 AM