Saskatchewan will be going to the polls a week from Monday, and we finally have seen some opinion polls come out of the province. On Friday, both Insightrix and Forum Research published poll numbers for the upcoming provincial election.
Both firms show a landslide victory in the making for the governing right wing Saskatchewan Party. Forum Research has them at an overwhelming 66% of the vote, while Insightrix has them at 60%. The opposition NDP is at 30% according to Forum Research or 33% according to Insightrix. These polls show a gain for the Saskatchewan Party since my last prediction in the summer, while they have the NDP stagnant.
The SP has gained much of their support thanks to the total collapse of the Liberal Party. The once dominant Saskatchewan Liberal Party will be running just 9 candidates in this election. All but two will be running in Saskatoon. It is likely the Liberals will finish behind the Green Party in popular vote, as the Greens will be running a full slate of candidates. Both polls had the Greens at 3%, while the Liberals are either at 3% or 1%. In other words, neither party will be much of a factor.
A strong economy is really putting the wind in the sails for Premier Brad Wall's government. He is clearly heading toward an historic landslide victory. How far can he go? Will his party be able to win a majority of urban seats? He is unlikely to win all the seats in the province due to is polarized urban vs. Rural split. The NDP is also strong in the north.
Many people are looking at the election of 1982 to compare this race with. In that election, the Tories won 54% of the vote, while the NDP won 38%. It resulted in the Tories winning 55 seats to the NDP's 9. The Tories are now the Saskatchewan Party, and are polling much higher than what they had in 1982. The NDP is also polling much lower. This could mean very bad news for the New Democrats. They may however be buoyed by more polarized electoral map that is present day Saskatchewan.
Seat by seat predictions:
I have averaged the two new polls to come up with the current predictions.
Riding changes since the last prediction:
While the NDP hasn't gone down in the polls, the increase in numbers for the Saskatchewan Party has hurt the NDP badly, and has put many more seats in the “too close to call range”. Seats I had previously going NDP but are now too close to call include Cumberland, Prince Albert Northcote, Regina Coronation Park, Regina Rosemont, Saskatoon Fairview, Saskatoon Massey Place, and even the NDP leader's own seat of Regina Douglas Park. Meanwhile, I have now called two previous too close to call seats for the Saskatchewan Party. Those are Regina Lakeview and Regina Northeast. 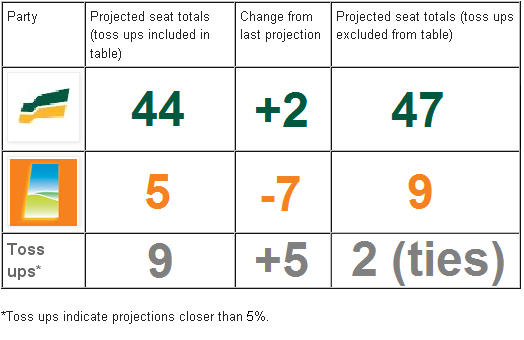 Conclusion
It looks like the Saskatchewan Party will be winning one of the biggest landslide's in the province's history. Never since Saskatchewan joined Canada in 1905 has a party managed over 60% of the vote. If polls are accurate, the SP will break this record. Therefore, they are in uncharted territory. Never has the main opposition party won less than 5 seats in a provincial election. Right now, the NDP is looking at winning a minimum of just 5 seats. Due to concentrations in Regina, Saskatoon and the north, the NDP is unlikely to break this record of just 5 seats, but who knows what could happen!
Posted by Earl A. Washburn at 2:56 AM

Email ThisBlogThis!Share to TwitterShare to FacebookShare to Pinterest
Labels: 2011, Saskatchewan