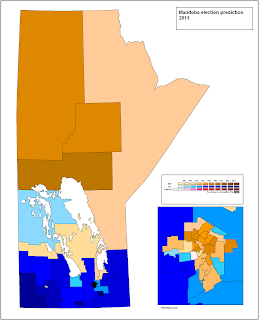 Manitoba goes to the polls today, and so it's time for my final projection. There has been just one poll since my last projection, released by Angus Reid just yesterday. It showed basically the same numbers as the Probe Research poll I used to do my last numbers. The NDP is still at 46%, and the Tories are still at 43%. The only difference is that the Liberals are up 1%, to 8% while the Greens are down 1% to 3%. As such, not much has changed with this prediction, except some changes to the "toss ups", as I made predictions as to who I think will win that were contrary to my last prediction.
Predicting the toss ups
Brandon East
My last projection gave the Tories the edge here, but provincially, this riding is still safe NDP territory. The riding has voted NDP in every election since it was created in 1969. While the region is trending Tory, I don't expect it to go PC quite yet- at least not while the NDP is running an incumbent in Drew Caldwell. He won comfortably in 2007 by 1,000 votes.
Dauphin
Dauphin is another long time NDP riding. It has been represented by the NDP in every election since 1981. This riding I had the Tories ahead in my last projection, but I'm not quite ready to say that, although it will be close with the Tories trending up here.
Interlake
Interlake is yet another rural Manitoba riding with a long NDP history. The NDP has won the region in every election since 1969. In the last election, the NDP won the seat by 1,600 votes, but the riding's boundary changes since then has made the seat more Tory friendly. I still don't think it will be enough for the Tories to win, however.
Kirkfield Park
Before the NDP finally won this seat in 2007, Kirkfield Park had elected the Tories for 30 years. This is one of those suburban Winnipeg seats that went to the new NDP of Gary Doer. While the NDP is up in Winnipeg, it's seats like Kirkfield Park the Tories will be targeting, and I think in this case they will prove successful in getting this riding back.
River Heights
The Liberals are in danger here of losing there one and only riding. The Liberal vote is expected to half across the city, and the Tories are up, and will be targeting this affluent riding in the centre of the riding. The Tories are also benefited from the fact that the new boundaries make this riding less Liberal friendly. However, with the Liberals putting all of their eggs in this basket, they should be able to keep it.
Selkirk
Selkirk has not voted Tory ever, since being created in 1957. While the area is trending towards the Tories, I don't think they are quite there yet. The NDP won here comfortably by 1600 votes in 2007. They should be able to win it again although it will be close. This riding has lost some of its NDP areas after redistribution.
Southdale
Until they won it in 2007, the NDP had not been able to take this area of Winnipeg since 1966. It's a traditionally Tory area that the NDP was able to win last election by 1200 votes. However, the riding has lost some NDP friendly neighbourhoods, and the Tories will be targeting it. They should be able ot pick it up.


Swan River
Swan River is an historically Tory riding that has voted NDP since 1990. It is currently an open seat. The NDP won the seat by 1,600 votes in 2007, but without the power of incumbency, are vulnerable here. I had previously thought the NDP was strong enough to keep this riding, but I think the Tories may just win it, strengthened by a depleted NDP in rural Manitoba, and the fact that the riding has lost some NDP areas.


Seat changes / conclusion
The only seat changes projected from my last prediction are the one's discussed above. Basically, I have the NDP picking up Brandon East, Dauphin and Selkirk, while I have the Tories picking up Kirkfield Park, Southdale and Swan River. There is no net change from last time. And so, I predict yet another NDP majority government in Manitoba. 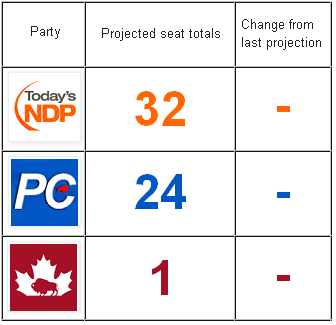