The Northwest Territories went to the polls on Monday to elect the members of the Territorial Assembly. The NWT uses a consensus government model, and has no political parties. It runs similar to a city council in that front, except the Premier is not directly elected by the people. Instead, he or she is elected from the within the Territorial Assembly by its membership.

Premier Floyd Roland opted not to run for re-election in his district of Inuvik Boot Lake, meaning the NWT will have a new Premier when the new assembly convenes and elects one.

Three of the 19 districts had no election, as the candidates in those districts were acclaimed. Those seats were Inuvik Twin Lakes, Tu Nedhe and Yellowknife South. Only one member was defeated, as Michael McLeod lost to challenger Michael Nadli in Deh Cho. It was a rematch of a close race between the two in 2003. In addition, there were three open seats where no incumbent was running. Inuvik Boot Lakes, Hay River North and Mackenzie Delta. 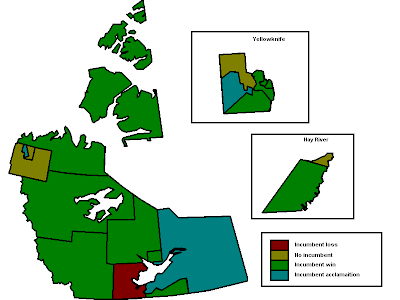 It's difficult to map an election with no parties, but this map at least shows what happened in each district. 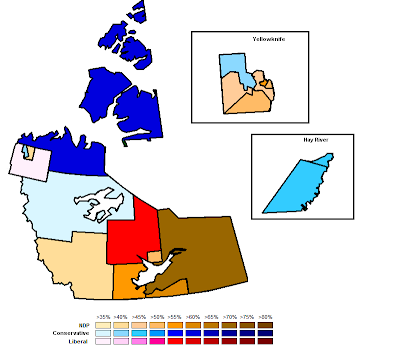 For fun, I also made an approximation map of the federal election results transposed onto the Northwest Territories territorial ridings. It should be known that voters generally vote for the candidate, rather than the party up in the north, so be cautioned not to look too much into this map. However, if the federal election was the territorial election, the NDP would win a majority government with 11 seats, the Tories 6 and the Liberals 2. 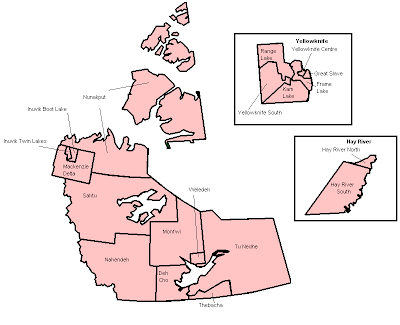 Finally, here is a guide map showing which ridings are where.
Posted by Earl A. Washburn at 3:58 PM