It's finally time to compile my very last prediction of the Ontario provincial election. Voters will be going to the polls today, and the polls are starting to show the Liberals finally breaking away into the lead, but will it be enough for a majority?
There has been many polls since my last projection, including a plethora of riding polls put out by Forum Research that put into question their earlier poll of 40,000 people which was a large enough sample for riding specific results. Just on Tuesday, they put out a poll of the ridings which had been the the closest in their prior poll, which helped me determine where they were (A) wrong and (B) where the movement was. They also put out some riding polls last week for the Ontario Federation of Labour.
For this projection, I used an average of the final polls these last few days. As I was doing the numbers, some last few polls came out, but they only vary somewhat from the numbers I used to make this projection. Most polls are now showing the Liberals in the high 30s, which is only a few points off their mark set in 2007 (42%). The Tories are polling in the mid-to-low 30s, which is around what they got last time (32%). The NDP is polling in the mid-to-low 20s, which is an improvement from the 2007, where they got 17%. Meanwhile, the Greens are polling in the low single digits, about half of what they got in 2007 (8%). It should also be known that the Liberals are polling quite well in the Toronto area, which is where they will make the most gains in votes, but they are still likely to lose some seats to the NDP which are set to gain as many as three seats in the region.
Here are my final predictions:
Riding changes since my last prediction:
The Liberals have gained the most since my last projection, gaining a net of 3 seats. I now have them gaining Ancaster—Flamborough—Dundas—Westdale, Brampton—Springdale, Oak Ridges—Markham, and Perth—Wellington from the Tories, while I now have them leading in Ottawa Centre and Windsor West where I had the NDP Leading before. One additional seat was tied in my last prediction, Thunder Bay—Superior North. I now have the Liberals winning it. The gains are offset by some seats I no longer have the Liberals leading in. They were leading in Brant, which I now have going Tory, and I now have the NDP leading in Bramalea—Gore—Malton, London—Fanshawe and Sudbury. I have also taken Kenora—Rainy River away from the NDP and given it to the Tories. 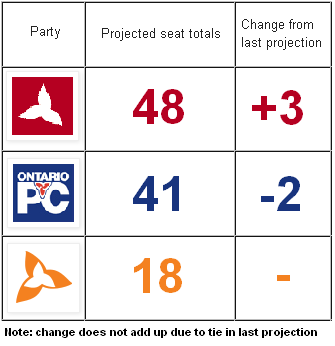