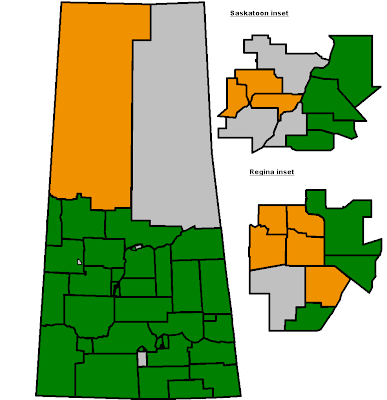 Saskatchewan is going through some of the best economic times in its history, which is benefiting the governing party there. The Saskatchewan Party currently holds 38 of the 58 seats in the Saskatchewan Legislative Assembly. The N.D.P. holds the remaining seats.

Surprisingly, there have been no polls in the province this year, but there have been a handful in previous years. The last poll was from November 2010, which showed the Saskatchewan Party at 57%, the NDP at 29% and the Liberals, which hold no seats at 8%. The SP has been polling around the 60% mark since late 2008 and is up from 51% in the previous provincial election in 2007. Meanwhile, the NDP has been polling around just 30% during the same time frame, down from 37% in 2007. I can't see things being much different right now, but some new polls would be nice.

Predictions
Without a poll in 8 months, it is difficult to tell what will happen in Saskatchewan at the moment. But, I'll give it a try anyways. Let's assume the Saskatchewan Party is still in the high 50s in popular support and the NDP in the high 20s. 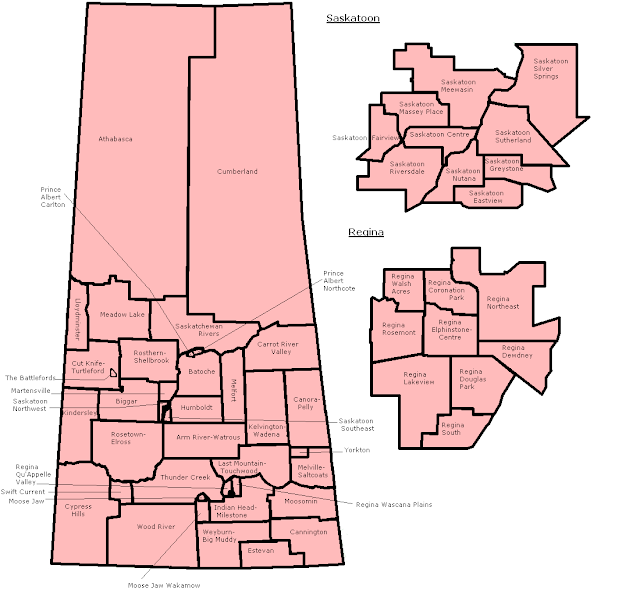 Rural Saskatchewan
Outside of Regina and Saskatoon is right wing Saskatchewan Party country. They Sask Party currently holds 30 of the 35 ridings in rural Saskatchewan. The NDP is limited to the other 5, concentrated in smaller urban areas and the far north.

The far north of Saskatchewan is traditional NDP territory, while the further south you go, the less NDP friendly the terrain. The NDP holds 4 seats in the region, two of which are the 2 far northern ridings (Athabasca and Cumberland). Athabasca has been held by MLA Buckley Belanger since 1995 when he was elected as a Liberal. He switched to the NDP in 1998. He won the seat by 27% in 2007, so it should be safe NDP. The other far north riding of Cumberland should be more interesting. It has elected NDP and CCF members for most of its history, and mostly with massive margins. However, the riding had a by-election in 2008 where the Saskatchewan Party came within 164 votes of winning the seat. Because of this close result, I cannot call this one way or the other.

The other two NDP seats in Northern Saskatchewan are in urban areas. The Battlefords was won by the NDP by just 300 votes in 2007, so one would expect an easy Sask Party pick up, right? Well, Liberal leader Ryan Bater is running in this seat, and will change the dynamics. The Liberals have no seats in the Saskatchewan legislature at present, and my money is against them winning any this time. However, the area has supported the Liberals in the past. For now, it's a toss up.  The final NDP seat in the region is Prince Albert Northcote. While this seat has been supporting the NDP since its creation in 1995, the party won by just 19% last election, which could put it into play for the Saskatchewan Party. For now, it's a toss up.

There will not be many interesting races in rural southern Saskatchewan. All MLAs will be running for re-election, and the only NDP seat in this region is Moose Jaw Wakamow. All other seats I predict the Sask Party will easily hold on to. Moose Jaw Wakamow will be a seat to watch, though. MLA Deb Higgins won the seat by 16% points in 2007, so it is definitely on the Sask Party's radar. For now, it's too close to call.

Saskatoon
As recently as the 1999 provincial election, none of Saskatoon's seats voted for the Saskatchewan Party. Ever since then, the Saskatchewan Party has been eating away at the NDP's foothold there. Presently, the Sask Party holds 5 of the 12 seats in the city. And, if their numbers keep up, they are in for a few more gains to- perhaps attaining a majority of the seats in the city.


The NDP will have one retiring MLA this election in the city. Pat Atkinson will be retiring in the riding of Saskatoon Nutana, in the south end of the city. She won her seat by 23% in 2007; however, now that it is vacant, the seat will be placed in the toss up category. The Sask Party will also be having one retiring incumbent, in the riding of Saskatoon Sutherland. If the NDP gains any seats in this election, this is probably the first place to look. Retiring MLA Joceline Schriemer won this seat by just 219 votes in 2007, in a riding that the NDP held since 1986. However, with the present numbers favouring the Sask Party, I expect them to keep this seat.


The most likely pick up for the Sask Party this election will be in the riding of Saskatoon Eastview. This is solely based on the riding's previous result which saw the NDP win by just over 300 votes. One caveat here is that the NDP has held the riding since 1988. However, I am calling this a Sask Party pick up. Another possible pick up is the riding of Saskatoon Meewasin. It too was won by the NDP by just over 300 votes last election. However, because the riding's % margin is greater, it's too close to call at this point. Finally, another possible pick up for the Sask Party is Saskatoon Riversdale, where they will have to overcome over 400 votes to defeat the NDP which has held the seat since 1986. This is also a toss up. The other three seats held by the NDP in the city (Saskatoon Centre, Saskatoon Fairview and Saskatoon Massey Place) should all be NDP holds, as they won by fairly comfortable margins in 2007.


There are two seats in the city that the NDP will be vacating with retiring incumbents. One is Regina Coronation Park, in the city's north end, where Kim Trew is retiring. He won in 2007 by 24%. This is a fairly safe NDP seat, that they should be able to keep. The other open seat will be Regina Northeast where Ron Harper is retiring. The NDP has held this seat since 1986, but Harper only won by just under 700 votes. The NDP is in trouble here, and I expect a Sask Party gain.


At least two other NDP seats in the city will be targeted by the Sask Party this election. Their best shot is in Regina Dewdney where they lost by just 500 votes in 2007. I predict a Sask Party gain here as well. The other target for the Sask Party is Regina Lakeview where they lost by 15% last election. This is large deficit to make up, but at current polls, this seat could be in play. Toss up. The remaining 4 seats in the city should remain NDP seats come election day. All of them were won by the NDP by at least 20% in 2007.


Conclusion
If the last poll of Saskatchewan, held last November proves to be close to the election result, the NDP is in deep danger. They are looking at a minimum of 9 seats out of 58 in the Saskatchewan legislature. In order to prevent this hemorrhaging, the NDP must hold onto their urban ridings, which has been their base in the province lately. If they turn things around, they need to win back these cities in order to do well in the election. Meanwhile the Sask Party needs to just have a good campaign, and they'll be sure to pick up a few seats. Oh, and the Liberals? They'll be really lucky to win a seat.