The second riding I will profile since Elections Canada released the 2011 election poll by poll results is Nipissing--Timiskaming. This riding is located in Northeastern Ontario, and is largely centred on the City of North Bay. The riding extends as far north as the Municipality of Temiskaming Shores in the north which incorporates the communities of Haileybury and New Liskeard. The riding runs along the Quebec border past Mattawa, Ontario, and then south into Algonquin Park. The riding goes west to also include the communities of Powassan and Trout Creek.

Nipissing--Timiskaming was the second closest race of the 2011 election. It required a judicial recount to determine that the Conservative candidate, Jay Aspin had defeated the incumbent Liberal MP, Anthony Rota by just 18 votes. The riding, which for the most part is a descendant from the old Nipissing riding has been solidly Liberal since 1988. In fact, it had only voted Tory once since 1921. Provincially, the area is more of a bellwether, in that it has switched parties often. Nipissing was the riding of former provincial Premier Mike Harris.

While the Tories picking up the riding was seen as a surprise by many, it wasn't that far fetched. Rota had defeated his Conservative opponent by less than 5000 votes in the 2008 election. A 6.2% swing from the Liberals to the Conservatives gave the Tories the narrow victory.

The Tories won the seat by picking up polls across the rural parts of the riding from the Liberals. They also made inroads into North Bay, however the Liberals still won the city overwhelmingly. The Conservatives saw their strongest performance in the Anglo Protestant areas just south of Lake Nipissing, which includes the Township of Nipissing, and the communities of Trout Creek and Powassan. The Liberals' strongest areas were in North Bay, and mostly in the north end of the city, which has a high francophone population.

While the Conservatives gained 4.4% at the polls, the NDP increased their vote even more, going up 5% points. They won a few polls scattered across the riding. Four of these polls were won in the rural heavily francophone townships of East Ferris and Bonfield. While the NDP candidate didn't have a French name, the NDP surge in Quebec probably helped the party in the French communities of the riding. The best NDP poll was the Bear Island Indian Reserve. While the reserve is small, the poll is quite large, and is that large dark orange area on the west side of the riding.

The Liberals have traditionally done well among the French in this riding, but this has slipped in 2011. While the Liberals won in the French parts of North Bay, the lost in the french rural areas and towns, like in Mattawa, and Temiskaming Shores. 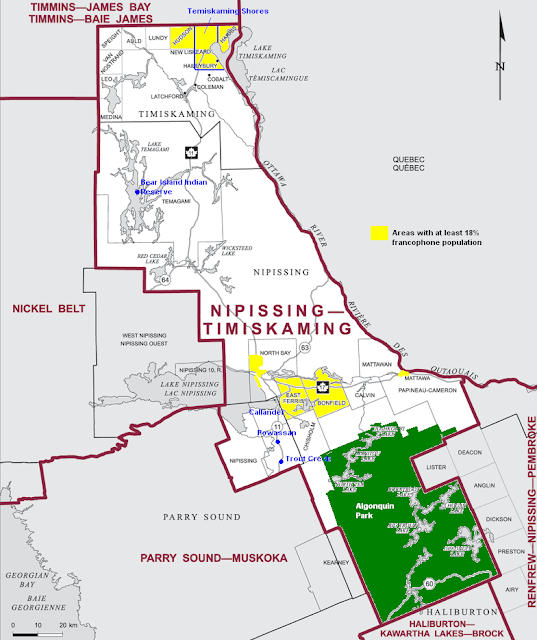 Poll map note: While the 2011 poll by poll shape files are available, I used the 2008 boundaries here. I don't have a working GIS program, so I have to trace over the 2008 poll maps at the Smufmatic website. That would also explain a slightly wonky projection in my map.
Posted by Earl A. Washburn at 4:53 PM