A few days ago, Ipsos-Reid released a poll for the upcoming Ontario election that indicated the following:


Tories: 42%
Liberals: 31%
NDP: 22%
Greens: 5%
These numbers are slightly better for the Liberals than the Forum Research poll I discussed in my last prediction. This Ipsos-Reid poll was conducted over a month, beginning in early June while the Forum Research poll was held on one weekend in later June. This could explain the difference, but any ideas I come up with would be pure speculation.

Anyways, I realized that if I want to keep up with these polls, I have to use at least some mathematical methodology. At least until we have a better idea of what's happening in each local riding. This is why I am going to use a swingometre to help me with things for the time being. The swingometre is a tool used more in British and Australian elections to look at how swings in votes can result in seat changes. Because we use the same electoral system, we can use it here too. One problem with it is that it assumes a uniform swing to one party, which is never the case. But it will aid me for the time being, as I am not sure how local races will be affected at the moment. 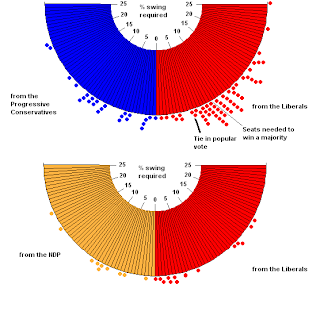 Here, I have two graphs. One shows the races that were Liberal vs. PC in the 2007 election and the other shows Liberal vs. NDP races. I included one seat where the NDP was a strong third in the lower graph as well. Each dot represents a seat. At the 0 mark in the middle are the results of the last election. If we move to the right of the mark, we assume a swing from the Liberals (to the Tories in the top graph and the NDP in the lower graph). The further right it goes, the more of those red dots will turn either blue or orange. I have not included a NDP vs. Tory graph, as there was only one race between those two parties. Also, there was one Tory vs. Green race that was not included.

The numbers represent the % swing. That is basically the average increase in support for one party compared to the average decrease of the other party. The Liberals won the last election by 10.6% of the vote. Therefore it would require a 5.3% swing to the Tories (the Liberals decrease their vote by 5.3% and the Tories increase it by 5.3% resulting in a tie). As you can see from the chart, this would only give the Tories 7 more seats, not enough to win the election. They need 28 seats to get a majority. This would require a swing of about 8.5% to the Tories, meaning that they could theoretically win the popular vote and still lose the election.

Luckily for the Tories, the latest Ipsos-Reid poll gives about an 11% swing to the Tories, which would give them 39 additional seats, well into majority territory. The poll also gives an 8% swing from the Liberals to the NDP, which translates to 9 additional NDP seats.

My new mid-July prediction will not be following the swingometre at verbatim. I still know enough about local voting habits to know that even with an 11% swing, certain seats will not fall. Also, some seats may fall which would require a greater than average swing.

Liberal vs. PC seats
The following is a list of Liberal held seats where the Tories finished 2nd in the last election, showing the swing the Tories need in order to pick up the riding. It also shows which party holds the seat federally which will help show us how realistic it is for that riding to vote Tory.


*Nipissing is part of the Nipissing--Timiskaming federal riding, which has different borders.

As you can see from this chart, even the "safest" provincial Liberal seats are not that safe at all. Their three "safest" seats are held by different parties in federal parliament.

Liberal vs. NDP seats
The following is a list of Liberal seats where the NDP finished 2nd in the last election. I have also included London--Fanshawe, where the NDP was a close third place.