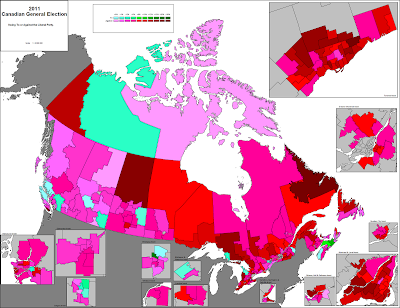 This map shows the percentage change for the Liberal Party between the 2008 and 2011 elections. In previous posts, I covered the Conservatives and the NDP change.

While the traditional colour for the Liberals is red, that colour on this map is bad for the party. The darker the red, the more the party's vote share went down. And there is a lot of red. Green on the other hand means an increase in support for the party.

The Liberals really got hit hard in the 2011 election. The once "natural governing party of Canada" fell to a measly 34 seats, down from 77 they won in 2008.

In Atlantic Canada, the Liberals only gained support in three seats- all in Nova Scotia. Perhaps this came from disgruntled former NDP supporters, upset with the provincial government. This may have been true, but each riding they gained in has its own story. In West Nova, the marginal Liberal gain can be attributed to those NDP supporters upset over the provincial government cancelling the Yarmouth ferry in the riding. In Cumberland--Colchester--Musquodoboit Valley, Liberal supporters supporting Independent Bill Casey may have come back home. And in Central Nova, the Liberals could only go up, having no candidate in 2008 (they had agreed not to run one against the Green's Elizabeth May). The Liberals lost every where else in the region, especially in northern New Brunswick, Saint John, Egmont in P.E.I. and in Labrador, where the Liberals lost a once strong seat to Peter Penashue of the Conservatives, who was the popular leader of the Labrador Innu Nation.

In Ontario, the Liberals gained in 7 seats. Two of those came in the Ottawa suburbs, perhaps civil servants worried about Tory job cuts. Strong campaigns in Kingston and in Guelph helped the Liberals hang on to those two marginal seats, increasing their vote to boot. Another strong campaign in Kitchener--Waterloo gave the Liberals a higher share of the vote, but they lost in another close election, a re-match from 2008. A collapse of the strong 2008 Green vote in Bruce--Grey--Owen Sound helped the Liberals increase there. And finally, the Liberals gained support in Sault Ste. Marie, where they ran the nephew of a former MP (with the same last name). In contrast, neighbouring Algoma--Manitoulin--Kaspuskasing saw on of the largest decreases for the Liberals, as well as much of the rest of Northern Ontario. Southwestern Ontario and the Greater Toronto Area were other hard hit ridings.

Western Canada was actually better for the Liberals in that their decreases were not as bad. In Manitoba, they gained in two seats. In Winnipeg North, they gained the most compared to 2008, with the popular Kevin Lamoureux who won the seat in a 2010 by-election. The Liberals also gained in Kildonan--St. Paul, where their 2008 candidate was dropped (but still remained on the ballot) due to controversial comments about 9/11. Hard not to gain from that.

In Saskatchewan, the Liberals gained marginally from their paltry 5% (4th place) performance in 2008 in the riding of Yorkton--Melville. All other ridings had losses, including a large loss of support in Desenthe--Missinippi--Churchill River where they NDP ran a strong candidate, taking much of the anti-Tory 2008 votes from the Liberals.

In Alberta, the Liberals had gains in 5 seats, three of which were in Calgary. Perhaps Calgary is moderating itself a bit, as evidenced by electing a moderate Muslim mayor in 2010? Elsewhere, the Liberals gained marginal support in Wild Rose (where they ran a judge who had made controversial comments about sexual assault) and in Medicine Hat, where they ran the mayor of Medicine Hat.

In B.C., the Liberals saw a gain in support in three ridings. Interestingly, two of those ridings were close races between the Tories and the NDP- which usually means the Liberal vote suffers due to strategic voting. These seats were Surrey North and Vancouver Island North, which were both close races in 2008 as well. The other seat the Liberals gained support in was Chilliwack--Fraser Canyon, where they ran a Chilliwack city councillor. The Liberals saw their biggest loss in the province in Esquimault--Juan de Fuca after popular Liberal MP Keith Martin retired, and opened the seat up to its traditional NDP-Tory roots.

Finally in Northern Canada, the Liberals saw a marginal gain in support in the Western Arctic (Northwest Territories) where they ran former Premier Joe Handley. Running a former Premier (Paul Okalik) in Nunavut however did not help them, where their vote went down by a fraction of a percent. The Liberals saw a large loss in the Yukon, where their MP Larry Bagnell went down in defeat. The gun registry, which the Liberals support, was very unpopular in this rural riding.

Many thanks again, to S. Smith of the U.S. Election Atlas Forum who made the map.
Posted by Earl A. Washburn at 1:16 AM