Last week, Elections Canada released the official poll by poll results of the 2011 federal election. The current format is either in PDF or CSV, while the Official Voting Results document they usually publish will not be available until August. Members of the US Election Atlas Forum (myself included) have begun to post riding maps already, and we can expect more to come. Some of the members have allowed me to use their maps, and I will post them in the future. But, I plan on doing an analysis of each map, so I will post them on the blog individually in the future. 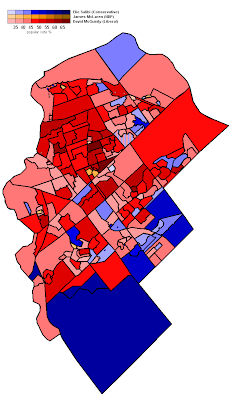 Today, I will start with Ottawa South. This is the riding where I grew up, so I get to start with it.

Liberal MP David McGuinty won the seat with 44.0% of the vote, down 5.9% from 2008, and his lowest showing since his first election in 2004. The Conservative candidate, Elie Salibi was down just 0.01% to 33.3% from his mark set when he ran in the previous election. The NDP candidate, James McLaren received 18.2% of the vote, the highest ever for the party in the riding. He increased the NDP's share of the vote by 9.7%.

These results translated into a swing of 2.9% from the Liberals to the Tories, which helped them pick up a number of polls. The Tories won most of their polls in the south of the riding, mostly in Blossom Park. They also made inroads in the Urbandale community where they won 4 polls and tied in one more.  The Liberals won the overwhelming number of polls however, getting their best results in the central part of the riding, concentrated in the middle class Alta Vista area where they were able to win a majority of votes in most of the polls. The Liberals did bleed to the NDP in many of the immigrant areas, which one a handful of polls- for the first time since winning one in 2004. The NDP won six polls, and tied in two others. Two of these polls were in the working class Heron Gate area. The other polls were all apartment or town house polls. The Tories also won some similar apartment polls, where they benefited from vote splitting between the Liberals and NDP- and perhaps a "small c" conservative immigrant vote. 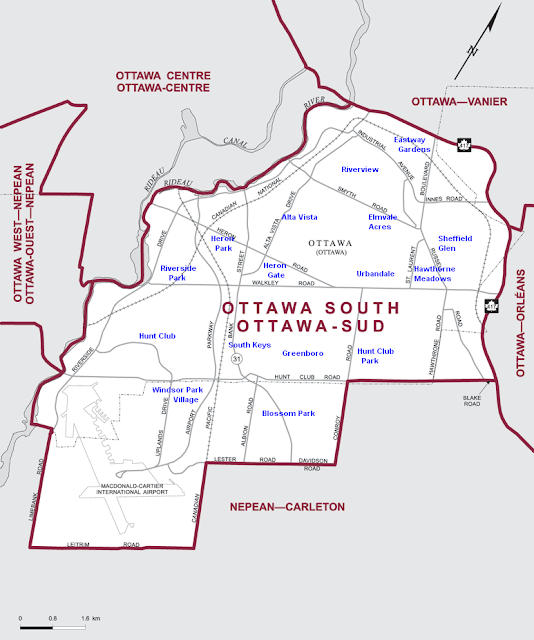