Continuing with of my 4 part series analyzing Toronto's poll map from the 2011 federal election. (see part 1 and part 2)

Part 3 will wrap up my analysis of Toronto's riding. Part 4 (which will be on a later day) will look at some demographic maps of the city to compare with the poll maps.

Liberal MP Bob Rae was the winner here in 2011, earning 41% of the vote. He lost a lot of support though from his 54% showing in 2008, which included an 18,000 vote lead over the Conservative candidate. However in 2011, it was the NDP that finished 2nd, coming within 6,000 votes of Rae. Despite Rae's somewhat comfortable margin, he actually won less polls than the NDP candidate. The NDP's strength in the south of the riding and dismal performance in the affluent north was contrasted by the opposite for the Conservatives. The Liberal vote was more spread out however, meaning strong seconds across the riding gave Rae the victory.

In 2008, the Liberals nearly swept the riding in their support. They lost just six polls. 5 to the Tories in affluent areas such as Rosedale and Yorkville, and one to the NDP. However, 2011 was much different. As mentioned, Liberal support was more spread out across the riding. They won much of their poll in the middle of the riding, separating the Conservative north and NDP south. Their best neighbourhoods were in Summerhill, Cabbagetown, Downtown and the southern part of Rosedale. Cabbagetown and Regent Park, to its south were the Liberal's best neighbourhoods in 2008. However, Regent Park, Canada's first social housing neighbourhood, swung heavily to the NDP in 2011.The NDP won much of the south of the riding, including Regent Park, the Garden District, Church & Wellesley, St. James Town and St. Lawrence. All areas picked off from the Liberals. The Tories meanwhile expanded their support in the affluent neighbourhoods in the north of the riding, like Rosedale, Moore Park and Yorkville. Again, all at the expense of the Liberals.

Toronto--Danforth
This is NDP leader Jack Layton's riding. Jack won every single poll in 2011, and won nearly every poll in 2008. He won over 60% of the vote in 2011, up from 45% in 2008. This mostly meant cementing soft NDP polls into stronger polls. Layton's best neighbourhood in both elections was the working class Leslieville area, where he won a majority of votes in almost every poll. The NDP's worst polls were in Riverdale, Greektown and Old East York, which were the only neighbourhoods with polls where they won less than 50% of the vote. These were also the only areas where the Liberals won polls in 2008.

Trinity--Spadina
Trinity--Spadina is the riding of Layton's wife Olivia Chow. Chow won 54% of the vote in 2011, and won all but four polls in the far northeast of the riding. The 2008 race was much closer between her and her Liberal opponent, which she only beat by 3,500 votes. Before the "orange wave", some pundits predicted the increase in condo development in the riding would make this riding a Liberal pickup.  However, Chow beat the same Liberal, Christine Innes by over 20,000 votes in 2011- a swing of 12.5% from the Liberals to NDP.

In 2008, the NDP won most of the poll in the riding, but most with less than 40% of the vote. The Liberals won polls scattered across the riding, with a cluster in the northeast corner of the riding, which is known as "The Annex", a relatively affluent and educated neighbourhood. The Tories also won one poll in The Annex, and two polls on the Harbourfront. The NDP's best neighbourhood was the multicultural Kensington Market area.

In 2011, the NDP won a majority of the vote in most of the polls, with their best area being the Kensington Market again, and neighbouring Chinatown (Chow is Chinese). The Liberals won three polls in the Annex, and the Tories held on to their one poll there, but lost their Harbourfront polls.

Willowdale is fairly homogenous in its voting patterns. Hall Findlay's victory in 2008 allowed her to win most of the polls. The closeness of the 2011 race meant that both the Tories and Liberals won polls across the riding. The Conservatives' best neighbourhood in both 2008 and 2011 was in the north end of the Bayview Woods-Steeles. This is where they won 5 polls in 2008.  The Tories also did well in Hillcrest Village, Newtonbrook, and the eastern half of the Willowdale neighbourhood in 2011. The Liberals won the western half of Willowdale and Bayview Village. Other neighbourhoods were more mixed. The NDP won one poll, the one containing Seneca College.

York Centre
The same result occurred in neighbouring York Centre, which the Tories also picked up, on a similar 10.3% swing from the Liberals. Liberal MP Ken Dryden went down to defeat, losing by over 6,000 votes to Conservative Mark Adler. The Conservatives had targeted this riding, having only lost it by 2,000 votes in 2008.

Unlike Willowdale, York Centre is much more polarized politically. The riding is separated in two parts thanks to the Downsview Airport which is right in the middle of the riding. The eastern portion, which has more people, voted heavily Conservative, while the smaller western portion voted heavily Liberal. Dryden was able to win in 2008 by winning parts of the eastern part of the riding, while winning every poll in the west.

The western part of the riding is called Downsview, and has large Black, Italian and Latin American populations. The Tories made inroads here in 2011, by winning a handful of polls. The eastern part of the riding is divided up into many smaller neighbourhoods- all of which voted heavily Tory. In 2008, the Tories only won Armour Heights and the Westminster-Branson neighbourhoods. The Tories have been making inroads among the high Jewish population in this riding, which allowed them to pick up Bathurst Manor and hold onto Westminster-Branson. They also won the neighbourhood of Wilson Heights.

York South--Weston
York South--Weston is an old NDP seat, held federally by former leader David Lewis in the 1960s and 1970s, and by the provincial CCF/NDP for most of the period between 1943 and 1996. However, it has been a fairly safe Liberal seat ever since. In recent years, the NDP has been targeting the party once again, acquiring it provincially in a by-election in 2007- only to lose it in the general election later in the year. So, when the orange wave came to town in 2011, it only made sense for this riding to be swept up from the Liberals to the NDP.

2011 faced a rematch between NDP candidate Mike Sullivan and Liberal MP Alan Tonks. Tonks defeated Sullivan in 2008 by over 6,000 votes. However, Sullivan won by less than 3,000 votes in 2011, benefiting from a 13% swing from the Liberals to the NDP.

In 2008, the Liberals won most of the polls in the riding, but the NDP had concentrated support in the southern half of the Weston neighbourhood, and in the diverse Mount Dennis neighbourhood. Liberal support was strongest in the northeast part of the riding, roughly northeast of Black Creek. When the tides turned in 2011, it was this part of the riding (the Maple Leaf and Amesbury neighbourhoods) that stuck with the Liberals.  The NDP strengthened their support in Weston, but also in the south part of the riding where they were nearly shutout in 2011. They also made inroads in the area between the CN Railway and Black Creek. The Tories won six polls in 2011, having been shutout in 2008.

York West's MP, Judy Sgro won this seat by over 5,000 votes, which is a considerable amount considering the low turnout in this riding. Sgro won by nearly 12,000 votes in 2008 and was able to win all but one poll in the riding. The NDP won that poll, which is located at York University. In 2011, the NDP expanded on this one poll by winning the whole York University area, and a handful of polls in other parts of the riding. The Tories were also able to win three polls of their own. The Liberals however still won most of the polls in the riding. Their best neighbourhood was Humber Summit in the northwest corner of the riding, an area with a high Italian and South Asian population. 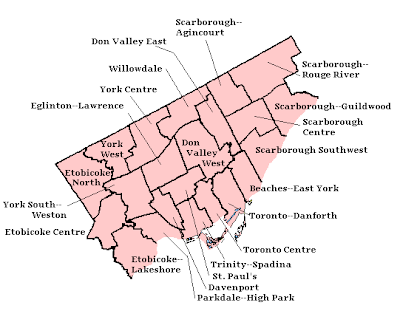