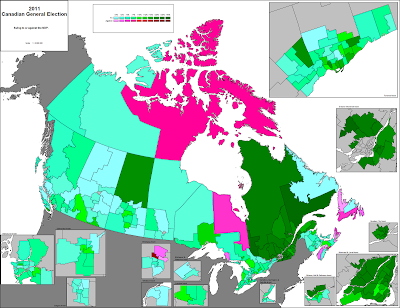 A few days ago, I posted the Conservative change in vote support between the 2008 and 2011 federal elections. My second installment shows the NDP change in support between those two same elections. On the map, green indicates ridings where the NDP gained in vote percentage (darker shades meaning a greater increase in the vote), while red ridings are where the NDP lost in vote percentage (darker red meaning a greater decrease in the vote).

So, what can be said about this map? Well, a lot of green certainly, attributed to the NDP's breakthrough in the 2011 race. This is most notable in Quebec, where most of the province is a darker shade of green. In not one single riding in Quebec did they lose in support.

In Atlantic Canada, the NDP suffered some losses, and some gains. Overall, they gained two seats in the region. In Newfoundland & Labrador, the NDP saw support losses in 4 of the 7 ridings, but actually gained one seat (St. John's South--Mount Pearl). 2008 was a very bad year for the Tories on "the Rock", thanks to then Premier Danny Williams' "Anything But Conservative" campaign. As discussed on the last map, the Tories made gains here in 2011, and it came at the expense of the NDP in many seats.

Nova Scotia was the only other Atlantic province to see NDP losses in support in 2011. The NDP saw a decrease in vote in 6 of the 11 ridings. The NDP government of Nova Scotia is somewhat unpopular, which may have hurt them in the province. But just like in Newfoundland, the NDP actually gained a seat in the province (Dartmouth--Cole Harbour).

In Ontario, just two ridings had the NDP lose support. Both were in Northern Ontario. One seat's decrease (Sault Ste. Marie) contributed to the NDP losing it to the Tories. The other riding to see the NDP's share of the vote go down was in Timmins--James Bay, which the party still kept. The gun registry (many Northern Ontario NDP MPs flip flopped on this issue) must have hurt the party in those two ridings, despite "the Soo" being mostly urban. It should also be noted that the gun registry didn't seem to hurt the party in any of the other Northern Ontario ridings. The ridings that the NDP gained the most came in the Greater Toronto Area, thanks to strong local campaigns in Scarborough--Rouge River, Davenport and Bramalea--Gore--Malton (the latter where the NDP lost by a few hundred votes).

In Western Canada, the NDP only saw a loss of support in some seats in Manitoba and in Nunavut. In Manitoba, the party only saw losses in three of the 14 ridings, but it was good enough to lose one seat (actually down two from 2008). All three ridings were in the north end of Winnipeg. The NDP saw the biggest decrease from 2008 in the riding Winnipeg North. This long time NDP seat was lost in a by-election last year to the popular Liberal MLA Kevin Lamoureux in a close race. He held on to the seat once again in the 2011 election in another close battle. The NDP lost another stronghold in neighbouring Elmwood--Transcona, a seat they held for over 30 years. Much debate has arisen as to why the NDP lost these seats. My theory is an unpopular provincial NDP government (at the time), and perhaps demographic changes.

As mentioned, the NDP also lost support in Nunavut. This is probably because they ran a lesser known candidate in a region where the person is more important than the party. Elsewhere in the west, NDP increases were modest to strong, with the highest increase in the riding of Desnethe--Missinippi--Churchill River, where the NDP went from a distant third to losing by less than 1,000 votes. This was again due to running a popular candidate in Lawrence Joseph, the former Chief of the Federation of Saskatchewan Indians in a riding with a high Native population.

Once again, thank you to S. Smith of the U.S. Election Atlas Forum who made the map.
Posted by Earl A. Washburn at 12:41 AM