Scarborough—Agincourt is a suburban riding located in the northwest corner of the former city of Scarborough in the east end of Toronto. It has been vacant since its long-time MP Jim Karygiannis resigned in April to run for city council in Toronto. Karygiannis – a Liberal – has held the seat since the riding was created in 1988. 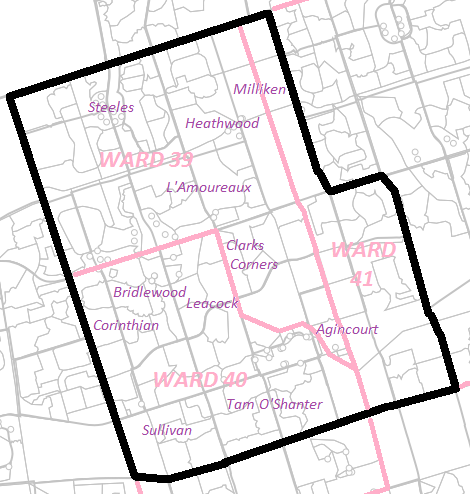 For a suburban riding, Scarborough—Agincourt is quite densely populated, as it is home to many apartment, condominium and retirement complexes. Most of the riding is covered in suburban subdivisions built in the 1960s and 1970s. The only main non-residential areas are industrial areas in the northwest and northeast corners of the riding, and a number of parks and parkland, the largest being the L'Amoureaux Sports Complex and the Tam O'Shanter Golf Club.

The riding is notable as being one of the most Chinese ridings in Canada. In fact, it is the second most Chinese riding in the country and the most Chinese riding in Ontario. Nearly half (47%) of its residents are Chinese, and just one in five (21%) are White. The riding also has a large South Asian population (14%) and Black population (5%). Chinese is also the first language of a plurality of inhabitants. 42% of residents have a Chinese language as their mother tongue, while only a third (33%) of inhabitants have English as their first language. Tamil is the largest South Asian language, with 5% of residents having that language as their mother tongue. 43% of the riding is Christian, with Catholics and “Other Christians” making up most of that population. There are also significant numbers of Hindus (8%), Muslims (6%) and Buddhists (6%). 37% of the riding has no religion. The riding is one of the poorer ridings in the country. The median income in the riding is $21,000 while the median household income is $55,000.

Chinese is the plurality race in most of the riding, except for the southwestern corner (the neighbourhoods of Sullivan, Corinthian and Bridlewood) where Whites form the plurality. Only in one census Tract do Whites form the majority of the population. Chinese is the majority race in the north (Steeles) and in the east (Agincourt) part of the riding. In one census tract, Chinese is the race of 100% of the population (this area only consists of a Chinese long term care facility).

Scarborough—Agincourt was created in the 1987 redistribution when its massively over populated predecessor riding of York—Scarborough was divided into two ridings (Scarborough—Agincourt and Scarborough—Rouge River). Part of York—Scarborough was also carved into the then-new riding of Don Valley North. Its first election in 1988 featured Liberal candidate Jim Karygiannis – a Greek immigrant who had previously run for the Liberals in the 1987 provincial election – against W. Paul McCrossan, the Progressive Conservative incumbent MP for York—Scarborough. The 1988 election would be the closest Karygiannis would come to losing, as he only beat McCrossan by 858 votes. Karygiannis would win with large majorities in every subsequent election until 2011, where he beat his Conservative challenger, Harry Tsai by 4500 votes and a 45% vote share. Some of Karygiannis' victories were quite massive. His biggest electoral win was in 2000, when he won 70% of the vote, defeating his next best rival, Canadian Alliance candidate Andrew Faust by 22,000 votes.

The history of what is now Scarborough—Agincourt follows the history of the Township of Scarborough until post World War II suburbanization fragmented the township (later the city of Scarborough) into multiple ridings. For much of its history, Scarborough was fairly rural, and was grouped with neigbouring rural townships.

From Confederation until 1904, Scarborough was lumped with Markham and East York into the riding of York East.

As the townships around Toronto became more populous, the ridings in the area became numerous. In 1917, Scarborough was joined with part of the east end of Toronto to become the riding of York East.

In 1925, Scarborough joined the riding of York South, which saw a dramatic boundary change, but retained its MP. The riding contained Scarborough and East York.

In 1935, Scarborough was moved into the new riding of York East, which also contained Markham and East York.

Since York—Scarborough had become too large, it divided into two ridings. The western part of the riding became Scarborough—Agincourt. From 1988 to 2000, the riding was rectangular in shaped, being bounded by Steeles Avenue, the CNR, Ellesmere Road and Victoria Park Avenue. In 2004, its southern and eastern boundaries were altered to its present state.

Following the redistribution which will come into effect in next year's election, Scarborough—Agincourt's boundaries will only be altered slightly. The part of the riding east of Midland Avenue will be transferred to the new riding of Scarborough North. The result makes the riding very slightly more Liberal and less Conservative.

In the 2011 election, Karygiannis won most of the riding easily. However, a number of apartment complexes in the Tam O'Shanter neighbourhood went so overwhelmingly Conservative, that the Tory candidate ended up winning the neighbourhood by a thin margin (hard to tell from just looking at the map). The area just south of Tam O'Shanter Golf Club has regularly been the most (or only) Conservative part of the riding in recent elections. This area includes the “Shepherd Village Christian Community”, a Pentecostal seniors' apartment complex. A poll covering this complex even voted for the Canadian Alliance in 2000. In the 2011 federal election, the Whiter parts of the riding - in the southwest - were slightly more Conservative than the rest of the riding. However, in the provincial election held last week, this area was more Liberal than the rest of the riding. Could it be that the Chinese community is trending conservative like it is in other parts of the country? Generally though, despite the large ethnic polarity in the riding's demographics, it does not show up much in voting patterns. The strongest neighbourhood for the Liberals in 2011 was L'Amoureux, but the 47% of the vote they won there was not much different from any other neighbourhood. The NDP is not much of a factor in the riding. They just won one poll (and tied another) in 2011, both polls in those apartment complexes south of the Tam O'Shanter Golf Club.

Conservatives: Poll #424 (75%)- This poll corresponds to one of the Shepherd Village Christian Retirement buildings on Bonis Avenue in Tam O'Shanter. No surprise that a Christian retirement community would be strongly conservative.

NDP: Poll #449 (39%) - This poll corresponds to one of the apartments on Carabob Court, also in Tam O'Shanter. This was the only poll the NDP won in the riding, but the NDP tied in another poll (#100) covering a Carabob Court apartment.

Conservatives: Poll #61 (12%) - This poll covers the Finch Birchmount Apartments (2821 Birchmount Rd), which is operated by Toronto Community Housing in L'Amoureaux, so it is basically a social housing project. Understandable why the Conservatives wouldn't do well in such a place.

NDP: Poll #424 (7%) - One of the Sheppherd Village Christian Retirement buildings.

In the lead up to the last federal election, the Tories did a great job in reaching out to minority communities – especially the Chinese community – by appealing to their social conservatism. With Liberal leader Justin Trudeau's recent hardline pro-choice stance on abortion, now would have been a great opportunity for the Conservatives to pick up this riding. It could still go Conservative though, as the Chinese community has had no problems re-electing Jim Karygiannis over and over again despite his lack of Chinese ancestry. But it makes it that much harder for the Tories by not running a Chinese candidate.

A Forum Research poll conducted in mid-May showed that the race will be a lot closer than one might expect. It showed that Chan had just an 8-point lead over Ellis (46-38). The NDP's Elizabeth Long was at 9% and the Greens at 2%. I would not be surprised if the poll is close to the actual election results. The riding's strong Liberal history both provincially and federally cannot be ignored here, and with the Liberals doing well in Canada-wide polling, it stands to reason they will likely win once again on by-election night. However, the real wild card will be how much the Tories can successfully tap into the Chinese vote.  We shall see.
Posted by Earl A. Washburn at 11:35 AM