There are now just 8 days remaining until election day in Ontario, and with the lone debate of the campaign occurring yesterday, it can be safely said that the finish line of the provincial election is within sight. Over the last week, we have seen a little bit of movement in the polls, with the Liberals ever so slightly increasing their lead over the Progressive Conservatives. Both EKOS Research and Abacus Data have shown the Liberals to have at least a seven-point lead in the polls. Forum Research – which hasn't released a poll since May 28 – has the two parties tied, while Ipsos – which is using an opt-in panel – continues to show the Tories ahead, but by just two points. Ipsos has been the lone polling company to show the Tories consistently ahead in this campaign, and it may be due to their (flawed) methodology. As a pollster myself, it is my professional opinion that Ipsos' decision to use their opt-in panel (that is, their survey respondents are members of their survey panel, one in which they have volunteered to join, rather than a probability based panel) has made their numbers unreliable. But in the name of consistency, I have decided to include their numbers in my model anyway (as I have been doing). Abacus Data, Ipsos and Forum all have the NDP in the low-20s, while EKOS has begun to show the New Democrats south of the 20% mark.

This week's projection takes into account the most recent EKOS poll released last night (EKOS is now doing a daily tracking poll), Abacus' poll released Monday, Ipsos' poll released last Thusday and Forum's poll released a week ago. It does not take into account recent polls released by OraclePoll and Nanos Research, which lack regional breakdowns. The average of the four pollsters show the Liberals with a narrow 1.4% lead over the Tories, slightly smaller than what they had in the last election. The NDP is averaging at 21.3%, which is a small decrease from the last election (where they won 22.7%). The Greens are continuing to poll quite high, and are averaging at 6.8%, which is a proportionally large increase from the 2.9% they won in 2011.

In terms of seats, my model shows the Liberals at 50, just shy of the 54 they need to win a majority, and a decrease of three seats from what they won in 2011. The Progressive Conservative Party is at 39 seats, an increase of two from 2011 and the NDP is at 18, an increase of one. 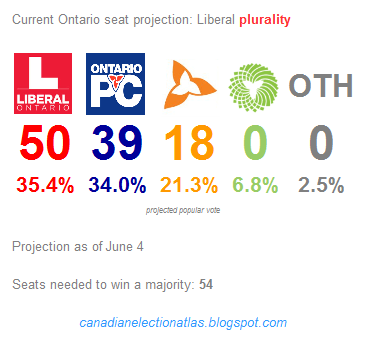 For this week's projection, I made a major change in my model in an effort to make it more accurately depict likely election outcomes. Last week I added estimated vote totals based on recent federal results in ridings where an incumbent lost in 2011. I continued with this idea to apply estimates in ridings that were open seats (no incumbents) in 2011 as well as seats that are open seats for this election. The idea being that not having an incumbent on the ballot dramatically changes the election results of the seats in question. Using federal vote results in these ridings I believe is the best way to estimate how these seats will go in this election, rather than using previous provincial results which I feel skew the model towards previous incumbents that are no longer on the ballot. Seats that were open in 2011 included Carleton-Mississippi Mills, Glengarry-Prescott-Russell, Stormont-Dundas-South Glengarry, Barrie, Bruce-Grey-Owen Sound, Pickering-Scarborough East, Scarborough-Agincourt, Don Valley East, Davenport, Mississauga East-Cooksville, Burlington, Welland, Cambridge, Chatham-Kent-Essex, Elgin-Middlesex-London, Essex, Windsor West, Kenora-Rainy River, Nipissing and Timiskaming-Cochrane. In some of these cases, I was unable to find a suitable estimate using federal results (often due to the federal riding having different candidate dynamics than their provincial counterparts or the provincial result in 2011 being close enough to the federal results in the riding). In these cases, I did not provide any estimates in my model, and I continued to use the 2011 result as the base. In the ridings of Glengarry-Prescott-Russell, Stormont-Dundas-Glengarry, Pickering-Scarborough East, Don Valley East, Davenport, Welland, Essex, Windsor West, Kenora-Rainy River, Nipissing and Timiskaming-Cochrane I made no changes in my model.

I also applied federal election result-based estimates in seats that are open races for this election. This affected Ottawa-Orleans, Durham, Newmarket-Aurora, Etobicoke Centre and Brampton-Springdale. In three open ridings (Kingston and the Islands, Kitchener Centre and Subdury), I ignored federal results. For Kingston and the Islands and Kitchener Centre, I found recent federal election results were not suitable for the projection, and in Sudbury, I am continuing to use an estimate based on a riding-poll released earlier in the campaign by OraclePoll.

And if that wasn't enough of a change in my model, I also looked at three ridings where an incumbent who lost in 2011 is running again. Taking a look at ridings where this happened in the last provincial election (only one case, Paul Ferreira in York South-Weston) as well as where it happened in Ontario in the last federal election (8 such cases), I calculated the average decrease in percentage of the vote (compared to the provincial average), and discovered that candidates who were incumbents in the previous election on average lost 1.22% of the vote more than the province-wide swing. I used this number to knock of that percentage for candidates where this applies to in this election (and redistributed it to the other parties based on how the candidate's losses were redistributed in the last election). This affected my model in three ridings: Haliburton-Kawartha Lakes-Brock (where Rick Johnson is running), Northumberland-Quinte West (Lou Rinaldi) and Bramalea-Gore-Malton (Kuldip Kular). All three of those candidates were MPPs who lost in 2011, but are running again this time.

And finally, I made one small tweak in Guelph, where I boosted Green Party leader Mike Schreiner's numbers. I took a look at the swing in Green vote in the last election in the riding of Simcoe-Grey (where he ran in 2011), and compared the change of Green support in that riding to the provincial average swing for the Green Party and applied this difference to Guelph, where he is running this time. I also reversed this increase in Simcoe-Grey, as Schreiner is not running there again.

Due to the major changes in my model, there have been quite a few ridings changing hands since my last projection a week ago. Also, there have been many shifts due to the polls changing. The Liberals have had a net change of zero seats, the Tories are up five seats, and the NDP is down five seats. The Liberals have gained Beaches-East York, Davenport, Parkdale-High Park and Trinity-Spadina from the NDP (due to the NDP's numbers dropping dramatically in Toronto) as well as York Centre and Haliburton-Kawartha Lakes-Brock (despite the change in my model reducing Liberal numbers there) from the Tories. On the flip side, the changes in my model, as well and increase in their poll numbers in Eastern Ontario have given the Tories some seats that my last projection had going Liberal. These seats are Cambridge, Glengarry-Prescott-Russell, Ottawa-Orleans, Ottawa West-Nepean, Northumberland-Quinte West and Barrie. In addition, the Tories are now ahead in Oshawa, which my model had going NDP last time.

The aim of the major changes in my model was to reduce the number of strange results that had been showing up in my previous projections. However, there are still some strange results. The recent EKOS poll released yesterday showed the Liberals way up the Northern and Central Ontario, which has put Haliburton-Kawartha Lakes-Brock into the Liberal column, which I feel unlikely at the moment. Even after changing my model to reduce Liberal support in the riding, it still shows the Liberals ahead. Future polls will likely correct for this, however. Also, recent regional polling shows the Tories up in Eastern Ontario which has Tories sweeping the three marginal Liberal-held seats in the region (Glengarry-Prescott-Russell, Ottawa West-Nepean and Ottawa-Orleans). While the Tories picking up any of these seats isn't strange per se, having them win all three might be so. Similarily, regional polling has the NDP down in Toronto, which has meant my model showing the current NDP-held seats of Davenport, Trinity-Spadina, Parkdale-High Park and Beaches-East York going Liberal. Again, it wouldn't be a surprise for the Liberals to win any of these seats, but sweeping all four seems to be unlikely.

The basis of my model extrapolates the results of the 2011 election using regional polling averages from recent polls. If a party is polling at double the level they won in 2011, then that party would see its support double in each riding in the region my model. I have also taken into account recent by-elections (only in the case where a non-incumbent part won), but projecting the results of the by-elections backward to the last election based on poll numbers from around the time of each by-election. That is, if a party did 5 points better than polls indicated they would've won in a by-election, then I have made their 2011 result 5 points more than they actually received in 2011.

I've also made numerous tweaks in the model where I've felt appropriate, to boost particular candidates, or to use estimates based on recent federal election results. Please refer to this blog post or previous posts for more details.
Posted by Earl A. Washburn at 2:50 PM