We're now just three days away from Thursday's provincial election in Ontario. As expected, a whole slew of new polling data has rolled in, and yet we're still no clearer to knowing what's going to happen as we were last week. Last week, it looked like the Liberals were poised to break away from the Tories into a comfortable lead- perhaps enough to win a majority. However, all the most recent polls suggest the race is now a dead heat between the two parties.

For today's projection, I've inputted three new polls into my model, conducted by EKOS, Ipsos and Forum Research. EKOS Research's is the most recent poll in my model, released this morning as part of their daily tracking poll. They show the Liberals and Tories tied – exactly – right down to the decimal point (35.9 – 35.9). It also shows the NDP dropping back to 17.6%, a drop of 2.9% since their previous poll released, Saturday. Most of that drop has helped the Liberals, who are up 1.7% since Saturday, while the Tories are up 0.4% since Saturday. Meanwhile, Ipsos' poll, released Friday, also shows the two parties tied, at 35% a piece. However, they have the NDP with a much better standing, at 26%! And Forum Research alsoshows a close race, with the Liberals up by two points over the Tories (39% - 37%). Their NDP numbers are closer to EKOS's numbers, giving the party just 17%.

While Ipsos' methodology is questionable (opt-in online panel), their numbers appear to be more in tune to the other pollsters than previous polls they conducted (poll which showed the Tories ahead, while the other polling firms had the Liberals ahead). However, Ipsos' NDP numbers seem way too high compared to EKOS and Forum Research (a whole 9 point difference). Ipsos polled over 2000 people in their survey, which has meant that my model (which weights by sample size) is heavily reliant on their poll, which means my model's results may be slightly skewed towards their results.

In addition to their province-wide poll, Forum Research also published 18 riding polls on Friday, most of which were conducted the previous weekend (May 31-June 1). I've inputted these polls into my model, which has resulted in many of the my projection's seat changes since Friday. I inputted the riding polls with the polling conducted over the weekend they were conducted, so my model's numbers in those ridings will be slightly different from the polls themselves, taking into account polling trends over the last week.

Here are the results of Forum's 18 riding polls and my commentary: 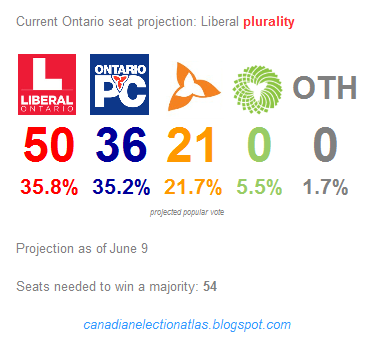 All of those riding polls threw a large wrench in my model, shifting the numbers in nearby ridings as well, creating for a plethora of seat changes in my model. Not to mention the regional polling changes as well. In all 12, ridings have changed hands compared to Friday, but the result was only a net gain of two seats for the NDP at the expense of the Liberals (no change for the Tories):

If the Liberals end up winning Davenport and Trinity-Spadina, and pick up two of those 905 seats that flipped back to the Tories (Halton, Newmarket-Aurora, Northumberland-Quinte West and Thornhill), then they will have won a majority. This appears to be the most likely path to a majority right now for the Liberals. For the Tories, the path to a majority seems to be too difficult to attain (where are they going to win 18 more seats?).

Methodology
The basis of my model extrapolates the results of the 2011 election using regional polling averages from recent polls. If a party is polling at double the level they won in 2011, then that party would see its support double in each riding in the region my model (that is, if they won 5000 votes in a riding, they would be projected to win 10000). I have also taken into account recent by-elections (only in the case where a non-incumbent part won), but projecting the results of the by-elections backward to the last election based on poll numbers from around the time of each by-election. That is, if a party did 5 points better than polls indicated they would've won in a by-election, then I have made their 2011 result 5 points more than they actually received in 2011.

I've also made numerous tweaks in the model where I've felt appropriate, to boost particular candidates, or to use estimates based on recent federal election results. Also, I have inputted riding specific polling for riding that have been polled during the campaign. Please refer to previous blog posts for more details.