There are now just six days left until the June 12th Ontario election, and just when I thought the Liberals were heading for certain victory, a new EKOS poll released this morning suggests this race is still anything but certain. The poll is part of EKOS Research's daily tracking of the Ontario election, and now shows the Tories with a narrow lead, albeit within the margin of error.

I've now entered this poll into my projection model, replacing yesterday's EKOS tracking poll. I also removed the Ipsos poll from last Thursday, which is now more than a week old. The effect on the projected popular vote is negligible, since the Ipsos poll also showed the Tories ahead. Now the only two polls used in my projection are the Abacus poll from last Monday, and this morning's EKOS poll. 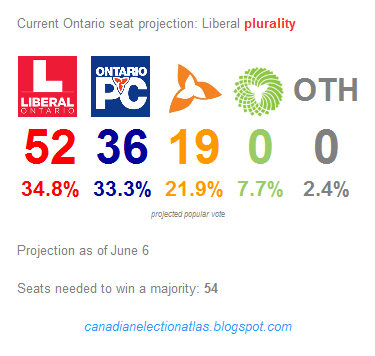 Despite the boost in Tory fortunes across the province, my new projection actually shows the Liberals gaining a net three seats from the Progressive Conservatives. This is due in large part to an increase in Liberal support in the very important "905" region of Ontario, which surrounds Toronto. This morning's EKOS poll shows the following numbers in that region:

This shift was enough to flip four ridings in my model from the Tories to the Liberals: Halton, Newmarket-Aurora, Northumberland-Quinte West and Thornhill. My model has previously shown the Liberals ahead in Northumberland-Quinte West, but never in the other three ridings. When my model did show the Liberals up in Northumberland-Quinte Went, I characterized it as a strange result, as I believe the region has been trending conservative. While I still think it's likely to go PC on election day, it's not inconceivable that the Liberals could win the riding back, as they are running former MPP Lou Rinaldi who held the seat for 8 years from 2003 to 2011. Halton is another surprise result in my projection, since the seat has been held by Tory Ted Chudleigh since 1995. However, recent election results have the riding trending Liberal, with the result from 2011 giving Chudleigh a narrow 3000 vote lead over his Liberal challenger, Indira Naidoo-Harris. Chudleigh and Naidoo-Harris are squaring off this time once again, so it should be close. My projection in Newmarket-Aurora may seem like a surprise as well, since it has been held by Tory Frank Klees since 1995. However, he is not running again, leaving the seat open. I feel if it wasn't for the popularity of Klees, the riding would likely be a bellwether - and now that it is an open seat, it could possibly go to who ever wins the election. And as for Thornhill, its high Jewish vote has made the riding a lean-conservative riding in recent elections. However, if enough of the non-Jewish vote goes Liberal, the Grits could pick this one up.


Another significant shift in the EKOS poll, was in the City of Toronto- where the Liberals have slipped at the expense of the Tories. That has resulted in one riding in my model flipping from Liberal to Progressive Conservative: York Centre. This has created a very unlikely scenario of York Centre going Tory in my projection, while its more Jewish neighbour, Thornhill is going Liberal (part of the reason York Centre is one of the most conservative leaning ridings in Toronto is because of its high Jewish population). At this point, I feel it is unlikely York Centre will go to the Tories. We'll see what future poll numbers in Toronto say.

Here is the EKOS poll regional breakdown for Toronto (change from yesterday):

(One reason why the Tories are polling higher than expected and why the NDP and Liberals are polling lower may have to do with a lot of people with 416/647 cell phone numbers do not actually live in Toronto, but in the 905 region surrounding the city. It is impossible do determine where a person with a cell phone lives, unless they are asked.)


Here are my projected numbers for each seat. Ridings are coloured by how they voted in 2011:

Methodology
The basis of my model extrapolates the results of the 2011 election using regional polling averages from recent polls. If a party is polling at double the level they won in 2011, then that party would see its support double in each riding in the region my model (that is, if they won 5000 votes in a riding, they would be projected to win 10000). I have also taken into account recent by-elections (only in the case where a non-incumbent part won), but projecting the results of the by-elections backward to the last election based on poll numbers from around the time of each by-election. That is, if a party did 5 points better than polls indicated they would've won in a by-election, then I have made their 2011 result 5 points more than they actually received in 2011.

I've also made numerous tweaks in the model where I've felt appropriate, to boost particular candidates, or to use estimates based on recent federal election results. Please refer to previous blog posts for more details.