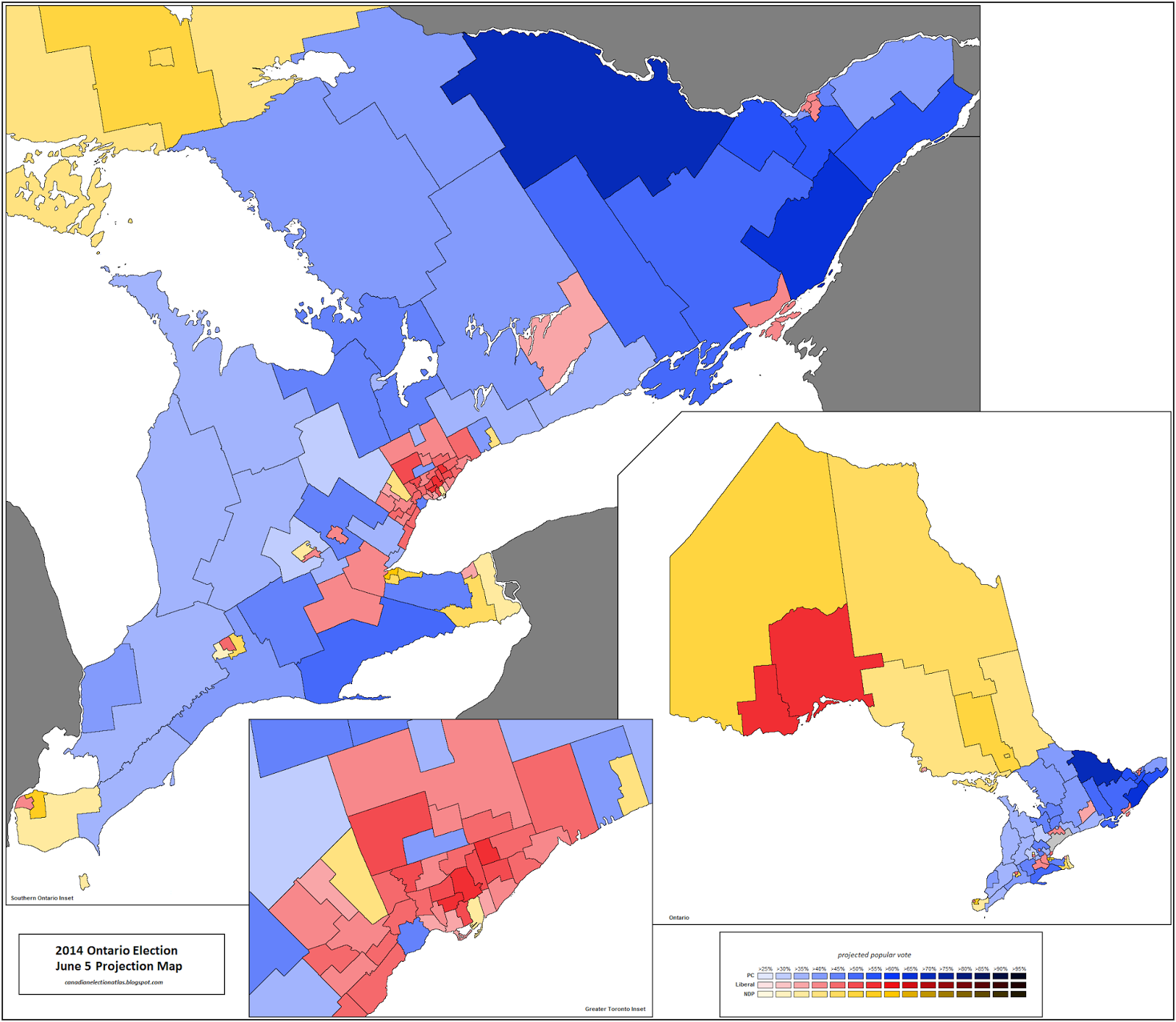 Since my projection yesterday, EKOS has released two daily tracking polls (yesterday afternoon and this morning), so for today's projection, I factored in the poll released this morning. This morning's EKOS poll shows a slight narrowing in the race, compared to previous EKOS tracking polls. It shows the Liberals with a five-point lead over the opposition Progressive Conservatives (35.7% - 30.9%), and the NDP recovering as well, now at 19.8%. Here is a summary (change from yesterday afternoon's poll / change from two days ago):

I have also removed last week's Forum Research poll from my model, which is now more than a week old. This has meant that despite the EKOS tracking poll showing the Liberals down slightly and the Tories up slightly, my model shows an increase in Liberal support, and a decline in Tory support. This is because the Forum poll had the two parties tied. 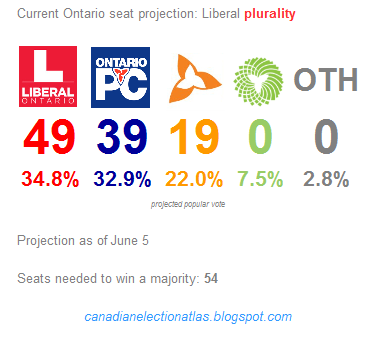 The big movements in my model have come in the 905, where the Liberals have increased their numbers at the expense of the Tories, and in the Northern & Central region, where the opposite has happened. These changes have flipped two ridings in my model since yesterday: Haliburton-Kawartha Lakes-Brock and Oshawa. I expressed my concerns yesterday about Haliburton-Kawartha Lakes-Brock going Liberal (as my projection had shown), but this most recent shift has given the riding to the Tories, with a reasonable margin too: 41% - 33%. Oshawa is a bit of a surpise. My model now shows the NDP on top once again. With Tory fortunes down in the 905 (and the NDP holding its own), Oshawa going to the NDP may not be so far fetched, but I have a hard time fathoming it still. To sum from yesterday, the Liberals are down a net one seat, the Tories are even, and the NDP is up one.

Methodology
The basis of my model extrapolates the results of the 2011 election using regional polling averages from recent polls. If a party is polling at double the level they won in 2011, then that party would see its support double in each riding in the region my model. I have also taken into account recent by-elections (only in the case where a non-incumbent part won), but projecting the results of the by-elections backward to the last election based on poll numbers from around the time of each by-election. That is, if a party did 5 points better than polls indicated they would've won in a by-election, then I have made their 2011 result 5 points more than they actually received in 2011.
I've also made numerous tweaks in the model where I've felt appropriate, to boost particular candidates, or to use estimates based on recent federal election results. Please refer to previous blog posts for more details.