Residents of Kamloops, British Columbia will be heading to the polls tomorrow in a mayoral by-election. The city of 90,000 people, located in the British Columbia Interior's Thompson Country has had its top job vacant since its previous mayor, Peter Milobar was elected to the British Columbia legislature in last Spring's provincial election. Milobar had been mayor since 2008, and sits as a member of the BC Liberal Party in Victoria. In addition to the mayoral by-election, there are two city council vacancies which will also be filled in tomorrow's election.

Politically, Kamloops is well known as a bellwether in provincial politics, the area has voted for whichever party that has won the most seats in every provincial election since the first Kamloops riding was created in 1903 (a longer streak than any other part of the province). This continued true in last Spring's election which saw both of Kamloops' ridings vote Liberal, as that party won the plurality of the seats in the BC legislature (the NDP would end up forming government with the help of the Greens). Federally, Kamloops has been more conservative than the country as whole in who it sends to Ottawa. It has been held by the Tories since 2004, and the Canadian Alliance before that (from 2000). Before 2000, the NDP's Nelson Riis held Kamloops' riding, so it has gone NDP recently. It has not voted Liberal since 1974. The 2015 election saw a three-way race between the Conservatives, NDP and Liberals.

Unlike some of the larger cities in British Columbia, there are no municipal parties on city council. But just like nearly every municipality in the province, there are also no wards. In addition to voting for mayor, residents get eight votes for city council for the eight positions available in regular municipal elections. 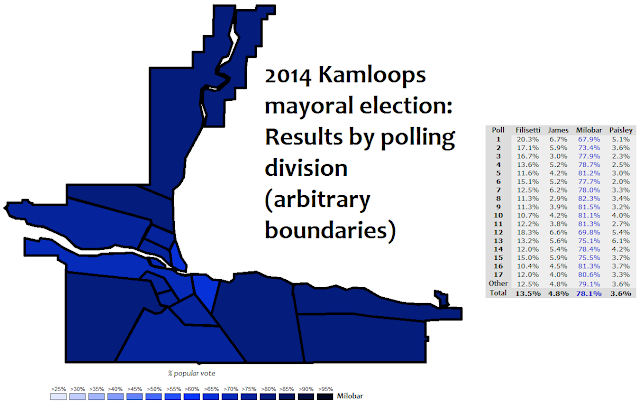 In the last mayoral election in the city, held in 2014, voters got to choose which voting place to vote at, whether it was close to home, close to work, or wherever they wanted to. This means it is impossible to accurately map the results of the election, as not only are there no wards to map the results, there are no polling divisions with definite boundaries to map either. But, I still attempted to map the 2014 mayoral election, by dividing the city into zones with arbitrarily drawn boundaries surrounding the city's 17 polling stations used in that election. Using this method, I was still able to find an obvious pattern in the results. While Milobar easily won re-election with 78% of the vote, his support was much stronger in the city's suburbs, where he won most polls with over 80% of the vote. His support was much weaker in the inner part of the city, with his worst poll being located in the city's downtown, which he won with “just” 68% of the vote. Milobar's main opponent was Pierre Filisetti, an owner of local gardening and landscaping business, who would go on to plead guilty for assault last year in a bear-spray incident. Filisetti's support was stronger where Milobar's wasn't, and vise-versa. As a BC Liberal (which is a right wing party in BC), Milobar's strength was in the same areas that tend to vote for that party in provincial elections. Kamloop's central core, where Milobar's support was weakest usually votes NDP in both provincial and federal elections.

In the race to replace Milobar, there are six candidates, but just one really stands out as his likely successor, councillor Ken Christian. Christian was the top vote-getter out of all city council candidates in the 2014 election, winning over 12,000 votes (comparatively, Milobar won over 17,000 votes). Christian has been on Kamloops' City Council since 2008, and was a school trustee prior to that. He has been endorsed by both Kamloops-South Thompson MLA Todd Stone and former mayor and former Kamloops-North Thompson MLA Terry Lake (both Liberals).

The candidate who poses the most threat to Christian is probably Bill McQuarrie, who is a columnist for a local TV station. McQuarrie has been campaigning on a “diversified economy” and getting rid of property tax increases. Other candidates include: Non-profit director Glenn Hilke who ran for city council in 2014 (winning 1% of the vote), who is running on affordable housing and other social issues; Former logger Stu Holland, who wants to “represent working people”, and wants to open the proposed Ajax mine, which has been a divisive issue in the city; Mike McKenzie, who wants to “bring the city together” and is a self described “local and national youth and community representative”; and Todd McLeod, and air-ambulance paramedic.

The race for city council will probably be more interesting, as there are 22 candidates running for the two open positions. One of the positions was held by Ken Christian, who resigned to run for mayor. The second position was vacated by Marg Spina, who resigned her seat after being diagnosed with brain cancer. Notable candidates running are former councillor Nancy Bepple who was the NDP's candidate in Kamloops-South Thompson in this year's provincial election, and Kevin Krueger who was a local Liberal MLA from 1996 to 2013 (representing Kamloops-North Thompson from 1996 to 2009 and Kamloops-South Thompson from 2009 to 2013). Another strong candidate is Kathy Sinclair, who is the executive director of the Kamloops Art Council. Not being very familiar with Kamloops politics, I can't make many predictions, but would not be surprised if the city elects two right-of-centre candidates based on its politics.