Newfoundlanders and Labradorians head to the polls today to elect municipal governments across the province’s 276 municipalities. Up for election are municipal councils; mayors, councillors and in some cases deputy mayors.

Among the province’s largest communities (over 5000 people), only the Town of Clarenville is seeing its mayor re-elected with no opposition. However, two other towns over 5000 people will not have an election for mayor, as only one candidate stepped forward to replace an outgoing mayor. Former Tory MHA Terry French has been acclaimed as mayor of Conception Bay South and town councillor Craig Scott has been acclaimed as mayor of Torbay.


In addition to Conception Bay South and Torbay, the municipalities of Gander, Happy Valley-Goose Bay, Labrador City, Mount Pearl, Portugal Cove-St. Philip's and St. John's will all definitely be getting new mayors, as their incumbent mayors are not running for re-election. In Labrador City, they've switched voting systems, so that there will no longer be a direct election for mayor at all. Instead, voters there will get up to seven votes to elect the seven members of town council, and the candidate with the most votes of those seven will be elected mayor.

As St. John’s is by far the largest city in the province, and the province’s capital, most of my focus on today’s municipal elections will be there. St. John’s has an 11 member city council consisting of the mayor, deputy mayor, five councillors elected from each of the five city wards, and four councillors elected on an at-large basis. Both the mayor and deputy mayor positions are elected at-large as well.

The race for mayor of St. John's could be quite interesting, as incumbent mayor Dennis O'Keefe is not running for re-election. The race to replace him is between three candidates: former mayor Andy Wells, city councillor Danny Breen and community activist Renee Sharpe.

Wells, a former union negotiator, served as mayor of St. John's from 1997 until resigning amidst controversy in 2008, after being appointed as chair of the provincial public utilities board. He had initially refused to resign after his appointment. While he was mayor, he was known for his numerous scandals and outspoken, abrasive personality. He decided to run for mayor after being suspended from his position with the public utilities board due to criticizing the St. John's City Council using a government email.

Danny Breen has served on St. John's City Council since 2009, representing Ward 1. He was re-elected in 2013 without opposition. Breen is seen as a contrast to Wells, being non-confrontational and consensus building. He is a Tory; he ran for the Progressive Conservative Party in a 2014 by-election in Virginia Waters, losing to Liberal Cathy Bennett.

Renee Sharpe is an ironworker welder with a local union, and her grandfather was mayor of Paradise. She is also a self-defence instructor and has worked with a number of community organizations. Not surprisingly, her platform is the most left wing of the three candidates.

(Oh, and there's also a tongue-in-cheek campaign for “Finn” a five year old Australian cattle dog, whose campaign on YouTube has become something of a sensation. Finn is an acting dog, having appeared in a movie and on TV.) 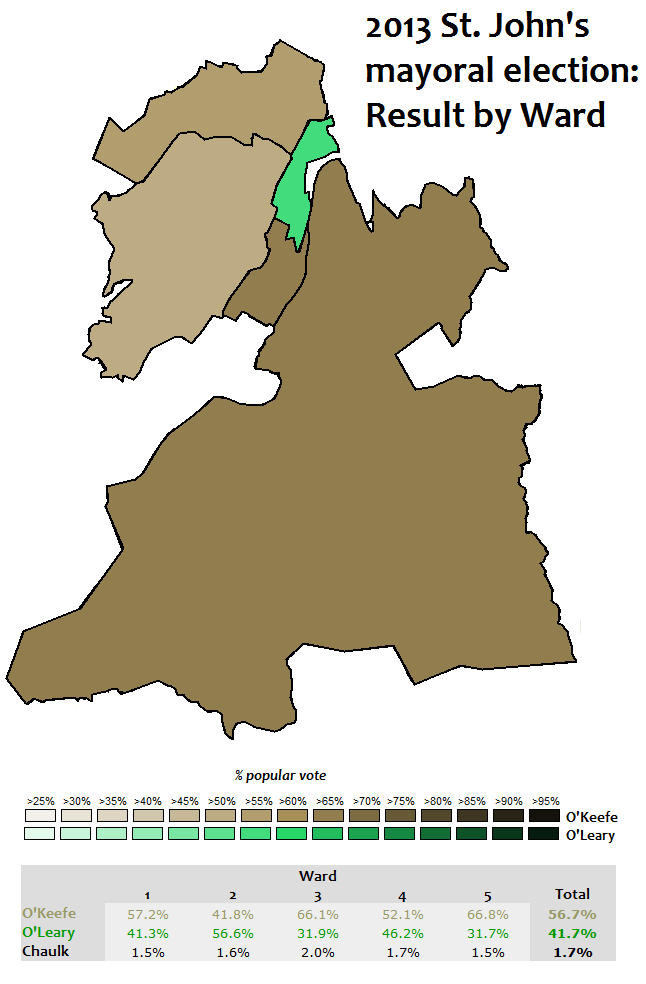 The 2009 election was also an interesting race, between mayor Dennis O'Keefe, a Tory and city councillor Sheilagh O'Leary, a New Democrat. O'Keefe won the election with 57% of the vote to O'Leary's 42%, which is relatively close for municipal election standards, and closer than polls had predicted. O'Keefe won four of the five wards in the city, doing especially well in the city's conservative western and southern suburbs. O'Leary won the remaining ward (Ward 2), which covers the downtown and part of the east end, an area that typically votes NDP both federally and provincially.

Compared to 2009, which was a race between two conservative leaning candidates, O'Keefe increased his vote share by a slight amount in four of the city's five wards. However, his vote share took a large hit in Ward 2, going from 56% to 42%, thanks to the presence of O'Leary's candidacy. Overall, O'Keefe saw a slight decrease in his share of the vote, thanks entirely to the vote shift in Ward 2. Special thanks to the City of St. John’s elections office who sent me the ward-by-ward results of the 2013 mayoral race (data not available on the city's website).

O'Leary got back onto council in a by-election last year (in Ward 4), and is looking for a promotion as she is running for the deputy mayor position against Michelle Worthman.

On council, the incumbents in three wards are not running for re-election. As noted, Ward 1 councillor Danny Breen is running for mayor and Ward 4 councillor Sheilagh O'Leary is running for Deputy Mayor. Ward 3 will also see an open race, as its councillor, Bruce Tilley is resigning. One notable candidate in that ward is Olympic gold medal winning curler Jamie Korab is running. As a fellow curler, I wish him the best!

In terms of predictions, I'm thinking that Danny Breen will probably win the mayoral election quite handily, as I think St. John's voters aren't going to want to deal with Wells' shenanigans again (crazier things have happened though, you only have to look south of the border to know what I mean!). I do wonder if Wells will even place second, as Sharpe appears to be running a more active campaign. We will know for certain after polls close at 8pm local time (6:30 Eastern).
Posted by Earl A. Washburn at 2:09 PM