The Fall election season kicks off today with a provincial by-election in the Saskatchewan riding of Saskatoon Fairview. The seat was vacated in July when its MLA, Jennifer Campeau of the governing Saskatchewan Party, accepted a job with a mining company in British Columbia. Campeau was a former cabinet minister in the government of Premier Brad Wall (who will also be resigning soon). This will be the second provincial by-election in the province since the last provincial election in 2016. The first by-election was held in March in Saskatoon Meewasin, and saw the NDP's Ryan Meili win the seat which was previously held by the Saskatchewan Party on an 11-point two-party average swing. Saskatoon Fairview is an even lower hanging fruit for the NDP, as Campeau won the seat in 2016 by just three points over her New Democratic opponent (compared to the eight point difference between the two parties in Meewasin). 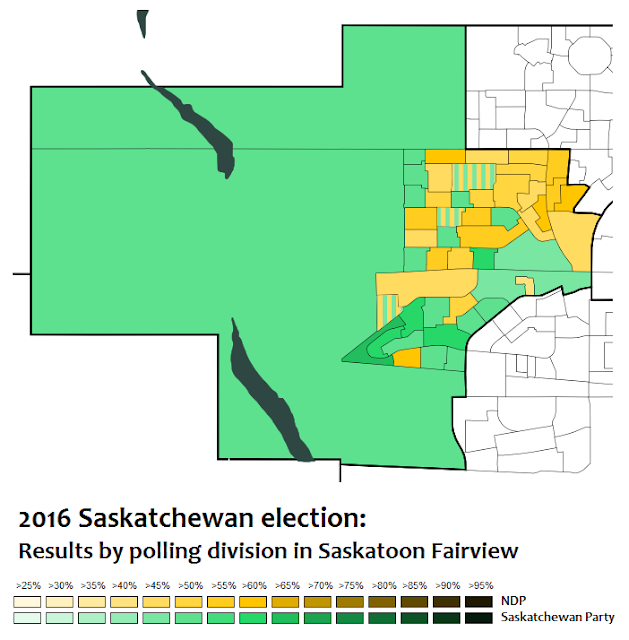 For now, both parties are effectively leaderless, with Wall announcing last month his plans on resigning the province's premiership, and with the NDP in the midst of a leadership election which will culminate next Spring.

Saskatoon Fairview is a middle class suburban riding on the west-side of Saskatoon. Most the riding was built up in the 1960s and 1970s following the area being annexed by the city. It continues to grow to this day with new developments being built in the Kensington and Blairmore neighbourhoods. Its older, core neighbourhoods are (from north to south) Confederation Park, Pacific Heights and Parkridge. The riding also contains part of the Massey Place neighbourhood, which was added to the riding before the last election after redistribution.

The riding is a traditional NDP seat, only voting for right wing parties in landslide elections, specifically 1982, 2011 and 2016. Even in 2011 and 2016 the race in Saskatoon Fairview was close, with the Saskatchewan Party winning it by just five points and three points respectively. With its current borders, the 2011 election would've been just as close as in 2016 (three point difference). The two-party swing between the elections was just 0.1% to the NDP, which was the exact same as the province-wide swing between both elections.

The riding's main political cleavage runs down 22 Street, with the area north of that street being more friendly to the NDP and the area south of that street being more conservative leaning. The socio-economic and political differences between both sides of the street are fairly minimal, but large enough to have shown up in recent elections due to how close they have been in the riding. Even the last federal election was close, with my calculations showing the NDP having narrowly won more votes in Fairview than the Conservatives (37% to 36% respectively), with the Liberals winning 24% of the vote.

In both the 2015 federal election and the 2016 provincial election, both Confederation Park and Pacific Heights narrowly went NDP, while Parkridge voted for the Conservatives and the Saskatchewan Party by seven points and 10 points respectively. While only partly in the riding, Massey Place is the most pro-NDP neighbourhood, perhaps owing to the fact that it was it was in an NDP seat before being redistributed into Saskatoon Fairview. The new Blaimore SC development is becoming more NDP friendly as it grows, while the new Kensington neighbourhood is attracting more conservative voters, but was also the Liberal's best neighbourhood in both the last federal and provincial elections.

The political difference between the northern and southern parts of the riding is a result of its demographics. Massey Place has a median income of $29,000 (according to the 2010 National Household Survey) which is slightly below the provincial median, while Confederation Park and Pacific Heights have median incomes of $30,000 and $31,000 respectively. However, Parkridge in the south of the riding has a marginally higher median income of $34,000. Parkridge is also Whiter than the rest of the riding; It is 75% White, while the rest of the riding ranges from 60% to 66% White. Meanwhile, Confederation Park in the north part of the riding is especially diverse, with Indigenous Canadians making up 17% of the population and Filipinos making up 14% of the population. One other difference about Parkridge is that it is a newer neighbourhood, being built up in the 1980s and 1990s, while the northern neighbourhoods were built in the 1960s and 1970s.

The NDP looks to recapture this riding with their candidate, Vicki Mowat who also ran there in 2016. She works as an executive assistant at the University of Saskatchewan, and defeated two other candidates for the nomination. Looking to retain the seat for the Saskatchewan Party is school trustee Cameron Scott. The Liberals, Greens and the somehow-not-dead-yet Progressive Conservatives are also running candidates, but should not be a factor. Despite the fact the Liberals got a quarter of the vote in the riding in the 2015 federal election, their provincial counterparts are not well organized at the moment.

There have been no polls published of the by-election race, and there has not been as much excitement as the Saskatoon Meewasin election in the Spring. To me, this is a sign of a probable NDP victory. The last election in Fairview may have been a close one, but it was only won by the Saskatchewan Party because the province-wide result was a landslide. With provincial polls suggesting the NDP is in a much better position, they should have no problem winning the seat. We will know for certain after polls close at 8pm (10pm Eastern).
Posted by Earl A. Washburn at 4:01 PM