Voters in the Quebec riding of Louis-Hébert head to the polls today to elect a new member of the Quebec National Assembly. The riding was vacated in April when its MNA, Liberal Sam Hamad resigned. He had held the seat since 2003, taking the riding back from the separatist PQ in 2003. 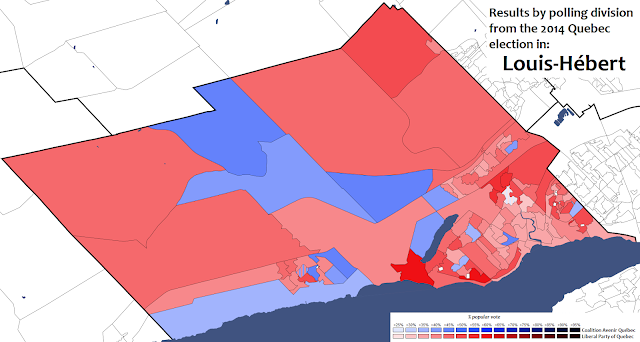 While the riding has existed since 1966, its boundaries before the 2001 redistribution covered less than half of its current territory, though the riding has been based in the western suburbs of the city since its creation. Before the 2001 redistribution, much of the riding was located in the riding of La Peltrie, which is now northwest of the city. Its new boundaries have proved to be good for the Liberal Party, as they won the seat in every election since. But by no means is it safe; Hamad won the seat in the 2007 election by fewer than 900 votes (over the ADQ), and had another close race in 2012, beating the CAQ candidate by a little over 2000 votes.

The riding is overwhelmingly Francophone (97%), with a small percentage (2%) being Anglophone. It is also overwhelmingly White (97%), mostly of French Canadian stock, but it has a non-negligible population of Irish ancestry. Most of the population is Catholic (86%) while 11% have no religion. The riding is significantly more wealthy than the province as a whole. The median income is $50,000 (compared to the provincial median of $33,000).

Geographically, the main political split in the riding is between the rural area (such as Saint-Augustin) which tends to vote for right-of-centre parties and the urban part of the riding (Cap-Foy and Pointe-de-Sainte-Foy) which tends to vote the Liberals. This split was less obvious in 2014 with Hamad winning the seat by 23 points. In fact on election day, the Liberals won a slightly higher share of the vote in Saint-Augustin than in the Quebec City part of the riding. The right-of-centre CAQ also did better in Saint-Augustin, winning 36% of the election day votes there compared to 30% in Quebec City. Both left-of-centre parties, the PQ and Quebec solidaire did better in Quebec City, but are generally not a good fit for this wealthy riding.

Based on current polling, the race could see a close match between the Liberals and the CAQ. The Liberals are running Hamad's former assistant Ihsanne El Ghernati, who was chosen quickly after the previous candidate had to drop out, following complaints from his former employees. The CAQ is running Genevieve Guilbeaut, the former spokesperson for Quebec's coroner's office. She also was chosen quickly after their candidate dropped out after a controversy as well. As for the other parties, the PQ is running biologist Norman Beauregard and Quebec solidaire is running lawyer Guillaume Boivin. It will be the first test for the new NDP provincial wing which just re-registered its party status after a 23 year hiatus. They are running former MP Denis Blanchette who held the federal riding of Louis-Hébert from 2011 to 2015. The Greens are running their leader, Alex Tyrrell.