What's going on in Alberta? This is the question asked by anyone who is paying attention to the provincial election campaign there. After just three years since the last election, Albertans will once again be heading to the polls, this time on May 5th. And just like last election, polls are suggesting the governing Progressive Conservative Party (which has ruled the province continuously since 1971) are in trouble of losing. However, the twist this time is, the Tories are now in third place in the polls, behind the right wing Wildrose Party and the left wing New Democratic Party. Yes, you read that correctly. The PC Party is behind the NDP. In Alberta. Alberta is easily Canada's most conservative province, or at least has that reputation, so the surge of the social democratic NDP has come as quite the surprise by anyone who follows Alberta politics. 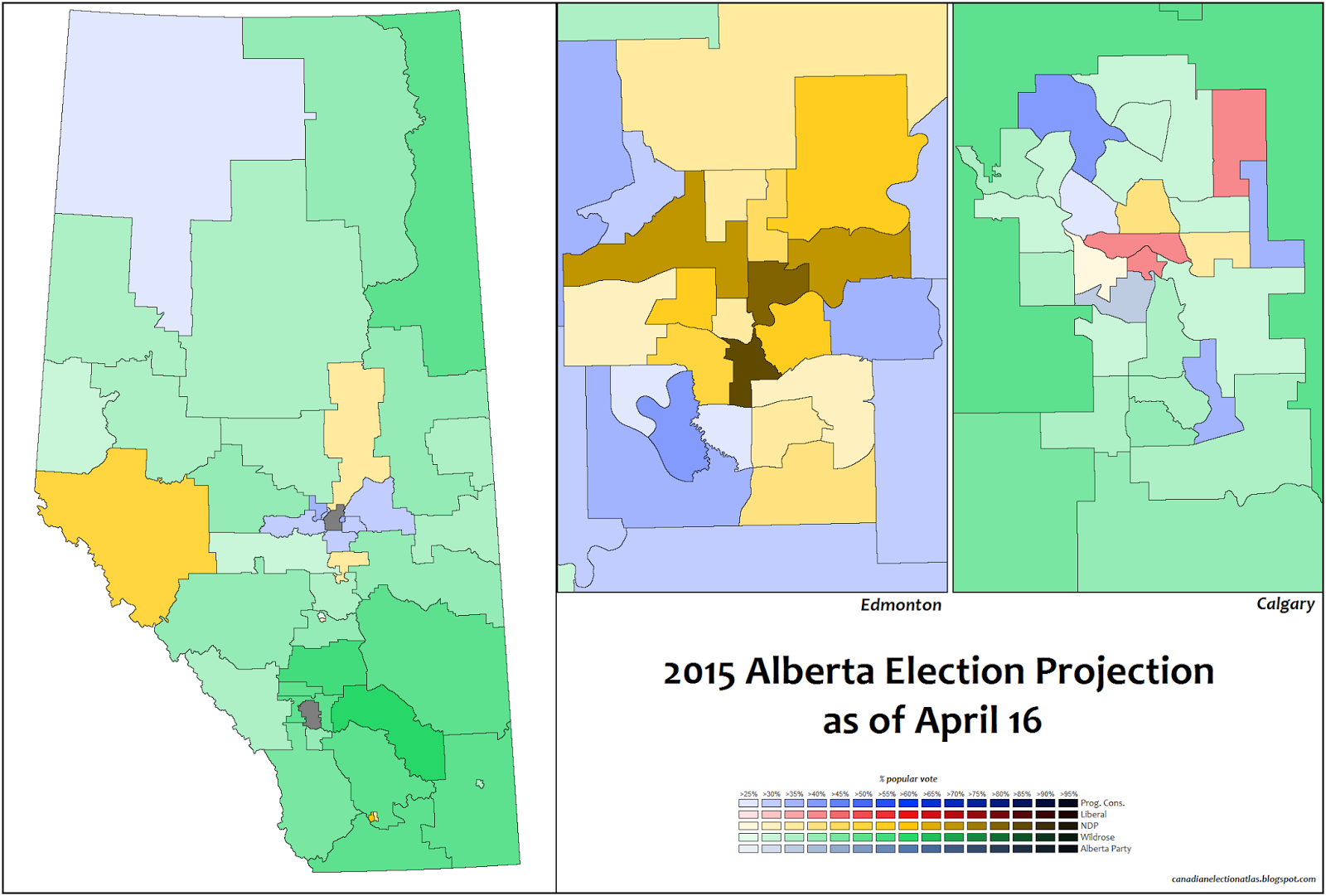 In 2012, every single opinion poll conducted during the election campaign predicted a Wildrose victory. Most polls showed the Wildrose Party with a comfortable 5-10 point lead over the Progressive Conservatives during this time. However, it was the Tories that ended up winning the election by 10 points. Many blamed the polling industry for this blunder, but there is evidence to suggest that undecideds broke almost unanimously to the Tories at the last minute to stop the Wildrose Party, who many moderate voters considered to be too extreme. The PC Party, under leader Alison Redford was a safe bet for moderates, as she was considered to be a Red Tory. In the end, the Tories won a comfortable majority, winning 61 seats in the 87 seat legislature. Wildrose formed the official opposition, winning 17 seats.

Redford's Premiership was marred by scandal and controversy, and she would eventually resign. She would later be replaced as leader by former MP Jim Prentice, who was also perceived as a moderate. He became Premier in September, and quickly became quite popular in the province. The Tories had been trailing the Wildrose Party badly throughout the summer of 2014, but when Prentice became Premier, the Tories once again vaulted into first place in the polls. Many within the Wildrose Party began to ponder their existence, as opposing the Tories from the right began to be thought of as an exercise in futility. On December 17th, Wildrose leader Danielle Smith and eight other MLAs crossed the floor to the join with the Progressive Conservatives. The now leaderless Wildrose Party was left with a rump of just five seats.

Over winter, the Wildrose Party fell to fourth place in public opinion polls, behind the surging Tories, the Liberals and the NDP. The time seemed right for Prentice to call an election, a year ahead of schedule, with his party looking seemingly invincible. Calling an early election is not always a popular decision, in Canadian politics. The best example of voter outrage over an early election was the 1990 Ontario election, which booted out the governing Liberal government, replacing them with the NDP after an unexpected surge in support. Sound familiar? Prentice wanted to call the election to give legitimacy to his unpopular austerity budget. If he was counting on the invincibility of his party, which has now ruled the province for 44 years, he may have taken his province's voters for granted.

With the Tory vote in Alberta now crumbling, left of centre voters have gone to the NDP, while right of centre voters have gone (back?) to supporting Wildrose. The NDP elected popular MLA Rachel Notley as leader in October. Notley is the daughter of long-time provincial NDP leader Grant Notley, who was briefly leader of the opposition in Alberta in the 1980s until his untimely death in 1984. The Wildrose Party elected Brian Jean as its leader in March. Jean is a former back bench Conservative MP, who represented the Fort McMurray area from 2004 until resigning his seat in January 2014. On the same day Jean was elected as leader, former leader Danielle Smith lost her bid to win the Tory nomination in her seat, ending what may have been a very promising political career for her.

And so with the election on the horizon, it is time for my first attempt at doing a seat projection for this race. I could not believe the first few polls that came out earlier this month, showing the surging NDP. So, I have had to wait until I could convince myself they were real, which has been helped by a succession of polls confirming that the “orange wave” is indeed true. For this first projection, I used two recent polls, one published by Forum Research and one by Mainstreet Technologies. Both polls show the Wildrose Party in a statistical tie with the NDP. Forum has Wildrose at 30% with the NDP at 28%, while Mainstreet has Wildrose at 31% and the NDP at 30%. Forum has the Tories at 27% while Mainstreet has them at just 24%. The Liberals, which may not even run in half of the ridings are still holding steady at 12% and 10% respectively, about what they won last election. 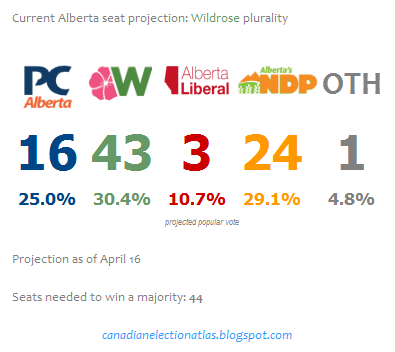 For this projection, I used the regional numbers from both polls, and inputted them into my traditional proportional swing model to see how each seat would go based on the results of the 2012 election. I also made some tweaks in ridings where certain party leaders ran in 2012 and where certain party leaders are running this time. For example, I reduced Wildrose support in the riding of Highwood, where former leader Danielle Smith ran in 2012, while I increased their support in Fort McMurray-Conklin where their current leader Brian Jean is running. I did not do this where a current party leader ran in the same riding as 2012. I plan on making further individual riding tweaks over the next few weeks, depending on what ridings the parties are targeting where they may not have done as well in 2012 (one possible example is Calgary-Fort, where the NDP is running a former city councillor).

My current projection assumes a full slate of candidates for all four major parties. However, it has become evident that the Liberals will not be running a full slate of candidates, so expect different numbers for the Liberals in my next projection. Additionally, the centrist Alberta Party will be included in my charts if they end up running in more than 50% of the ridings.

While Wildrose and the NDP are in a statistical tie, the electoral map strongly favours Wildrose. The NDP vote is heavily concentrated in urban areas, especially in inner-city Edmonton, where my model shows them winning many seats with over 70% of the vote. Meanwhile, Wildrose support is evenly spread out across rural Alberta, but winning no seats with more than 60% of the vote.

My model currently shows Wildrose winning almost every seat in rural Alberta, as well as winning most seats in Calgary, due to heavy vote splitting between the other three parties. In Edmonton however, the strength of the NDP and residual PC strength has shutout the Wildrose Party. Overall my model has Wildrose winning 43 seats, one shy of a majority. In 2012, Wildrose had difficulty breaking through into urban areas, but may have more success this time due to vote splitting, even if they win a similar share of the vote (which is where they are at now).

For the NDP, my model has that party nearly sweeping Edmonton, as well as making inroads into other urban areas across the province. This includes three seats in Calgary, both Lethbridge seats and one Red Deer seat. Additionally, my model has them winning three rural ridings. However, take this with a grain of salt, as it is going to be a very difficult task guessing where the NDP can win in rural Alberta, if at all. As we have increasingly seen in the other Western Provinces, there is a huge urban-rural divide with NDP votes. This may be true in Alberta as well. Both Calgary and Edmonton have progressive leaning mayors, so it is not as hard to see the NDP win seats in either city, but winning seats in very conservative rural Alberta probably wont happen. In total, my model shows the NDP winning 24 seats.

The Tories have to hope for another last minute surge in support if they have any chance of salvaging this election. Being in third place will make the choice for those undecided voters harder, though. It is one thing to vote for a second place party to stop the first place party, but how will these last minute undecided voters react if the Tories are in third? There are surely many moderates who will hold their noses and vote PC to stop Wildrose and NDP, but there will likely be other moderates who will vote NDP to stop Wildrose and vice versa. For the Tories, my model shows them hanging on to just 16 seats, most in suburban Edmonton, where neither the NDP nor Wildrose are popular.

For the Liberals, the rising support of the NDP, as well as not running a full slate will end up hurting the party. They may be polling at 10-12% now, but they will likely win less than 10% on election day again, the way things are going. My model shows them retaining the three seats they currently hold in Calgary, while losing both of their Edmonton seats to rising NDP. Edmonton Centre will be the wild card for the Liberals, as their candidate (MLA Laurie Blakeman) received the endorsement from the Alberta Party and the Greens. Would-be NDP voters may be attracted to her for rallying the other progressive parties behind her, and vote for her.

Presently I have “other” winning one seat. This is the riding of Calgary-Elbow, where Alberta Party leader Greg Clark is running. This seat held a by-election in October where Clark won 27% of the vote, just 800 votes behind the Tory candidate, Gordon Dicks, who won 33%. With the Tories much lower in the polls, it stands to reason that Clark could now win this seat, even if he only wins 27% again. In 2012, the Alberta Party won just 1.3% of the vote, but saw respectable results in a handful of seats. Forum has them at 2% while Mainstreet has them at 5%, so they are polling better now. 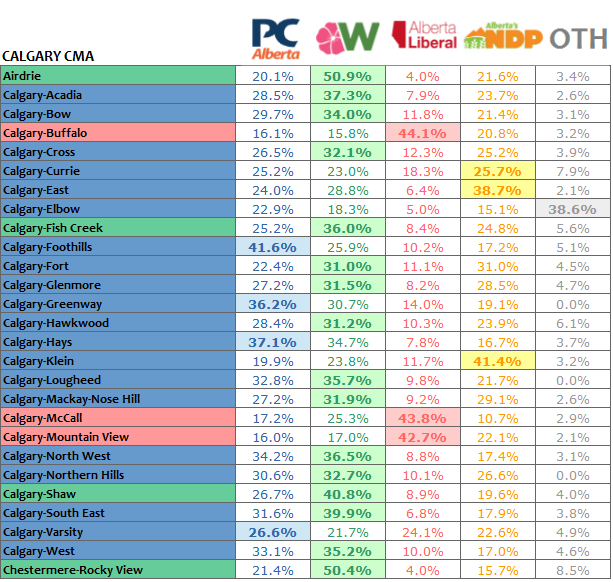 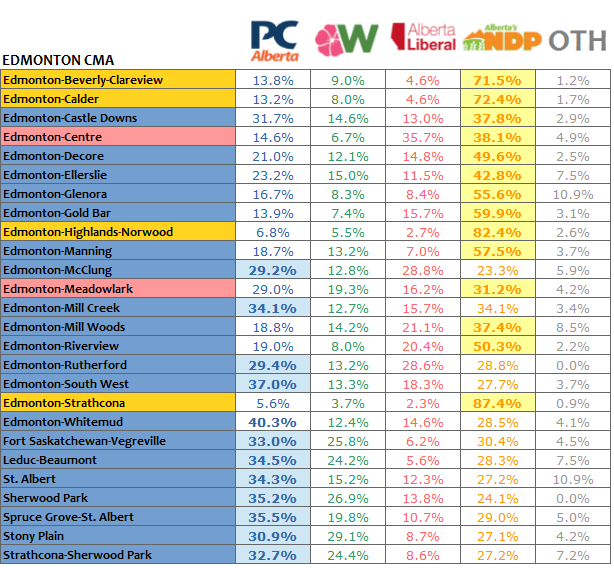 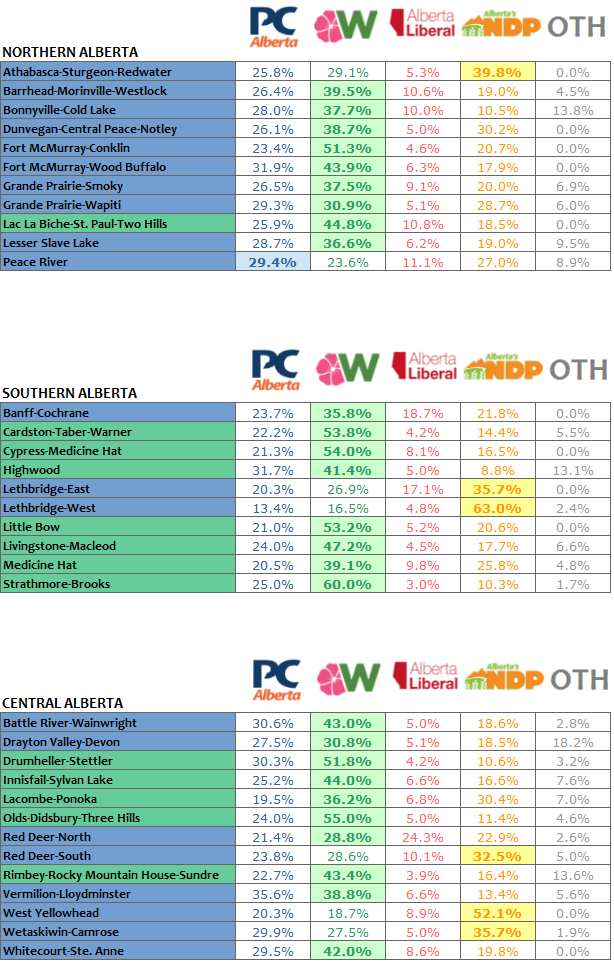