While the Alberta election campaign continues to excite politicos, there is another province in the country holding an election: Prince Edward Island. Islanders head to the polls on May 4th, the day before the Alberta election. And unlike Alberta, most believe the election in P.E.I. is a foregone conclusion. However, with just one poll released during the campaign so far, we are still in the dark as to what exactly is happening there. 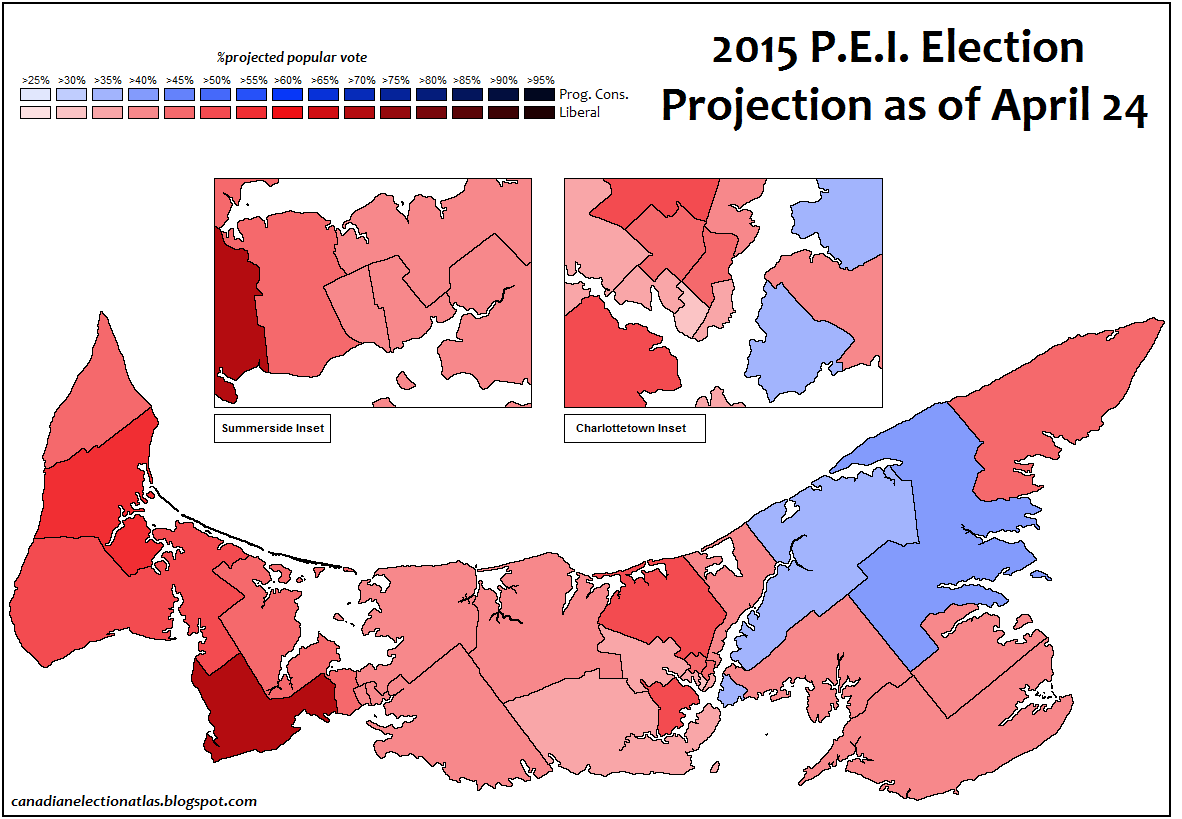 Presently, the Prince Edward Island Liberal Party is enjoying a great deal of support in the province. It has been in power since 2007, winning landslide majorities in both the 2007 and 2011 elections under the leadership of Robert Ghiz. Last November, Ghiz unexpectedly announced he'd be resigning as Premier, effective in February. Despite the large lead in the polls the Liberals have enjoyed, just one candidate ran to replace Ghiz. University of Prince Edward Island president Wade MacLauchlan threw his hat in the ring, and no one, not even a sitting MLA, ended up running against him, due to his wide support from caucus and from the federal Liberals' three Members of Parliament. MacLauchlan became Premier on February 23rd, and also became the first openly gay man to become a Premier in Canada.

Following MacLauchlan's ascension in February, the Liberals immediately received a large boost in the polls. A Corporate Research Associates (CRA) poll conducted at the time indicated that the Liberals were at 58%, the highest they have been at since the 2011 election, where they won 51% of the popular vote and 22 seats. The opposition Tories were at 26% in the poll, a 14-point drop since 2011, when they won five seats. The seat-less NDP polled at 12%, an increase nine points since 2011, but a significant drop from where they were polling at in the 2012-2013 period, where they peaked at 32%. The Greens were at 4% in the poll, which is what they won in 2011 (ahead of the NDP).

The only pollreleased during the campaign so far was conducted by Abingdon Research. Released Tuesday, it showed a drop in Liberal support (43%), and an increase in NDP (18%) and Green (12%) support. The Tories were at 27% in the poll, a one-point increase since the CRA poll in February. It was this poll that formed the basis of today's projection.

There were no regional breakdowns in the poll, so I just extrapolated the poll's numbers across the whole province, based on the a proportional swing from the 2011 election. The NDP is running a full slate of 27 candidates for the first time since 2000, so for the ridings where they did not run in 2011, I projected how it would have voted based on how the NDP did in those areas in the federal election. I did the same for the Green Party, which also did not run a full slate in 2011 (and is running in all but two seats this election). Additionally, I boosted the support of the four party leaders in their ridings, as none of them led their respective parties in 2011. Additionally, I removed some support for parties in ridings where their leaders ran in 2011, based on what result I believe an average candidate would have received there. 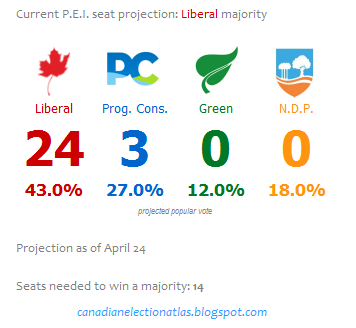 The result of my projection is that the Liberals would gain two seats at the expense of the Tories. Despite their strong polling numbers, neither the Greens nor the NDP would win any seats, according to my model. A huge caveat to remember is that elections in PEI are very localized, due to the small size of the ridings, and the province's political traditions. A proportional swing model alone cannot reflect the local races on the ground.
While the Liberals are polling below their 2011 levels, the drop in Tory support has my model showing them gaining both Souris-Elmira and Tignish-Palmer Road. Despite the fact that the Liberals are in landslide territory (which is typical for PEI elections), they would only win a majority of votes in five ridings, including York-Oyster Bed, the riding where Wade MacLauchlan is running in.

My model shows the Tories reduced to just three seats: Georgetown-St. Peters, Stratford-Kinlock and Morell-Mermaid. All three of those seats are traditionally safe Tory seats. The Liberals have only won one of those seats (Stratford-Kinlock in 2007) since their creations in 1996. New Tory leader Rob Lantz is looking to enter the legislature by running in Charlottetown-Brighton, but my model shows him in 4th! I admit this is probably too low for the former city councillor.

For the Greens, they are concentrating all of their resources in trying to elect their leader Peter Bevan-Baker in the riding of Kellys Cross-Cumberland. This sometimes successful strategy helped get federal Green leader Elizabeth May elected in her riding, as well as get New Brunswick Green leader David Coon elected in his riding in last year's provincial election there. This may prove successful; my model has him in a close race against the Liberals.

For the NDP, they have not won a seat on the island since 1996, when then-leader Herb Dickieson won the Prince County seat of West Point-Bloomfield. Their new leader Michael Redmond chose to run in Kings County's Montague-Kilmuir riding, a district that the NDP has not run in since 2003 (where they won just 30 votes). The NDP's best shot at a seat is in the capital, where my model has them in a close race in Charlottetown-Lewis Point, behind the Liberals.

Here are the projected results for each riding. Ridings are shaded by how they voted in 2011: 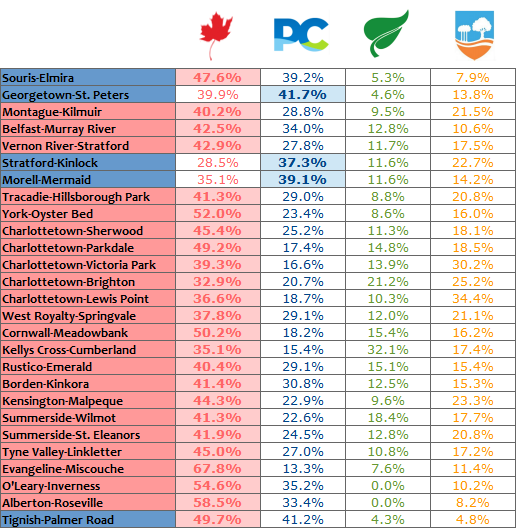