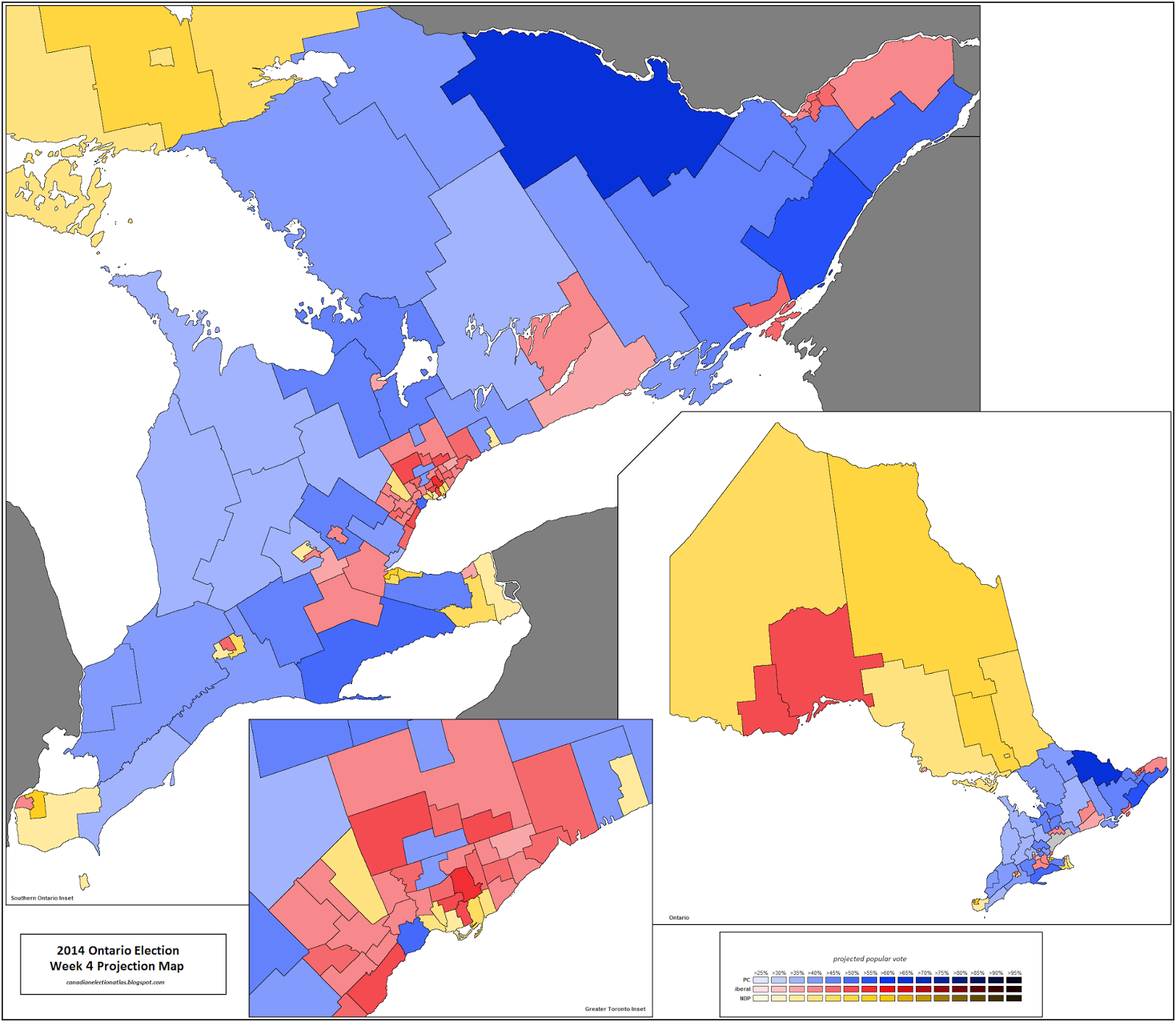 There are now just 15 days remaining in the Ontario provincial election campaign, and with the list of candidates confirmed last week, it's time for another seat projection. Since my projection last week, polls have shown the Liberals inching further and further away from the Tories, but are still in minority territory according to this week's projection. 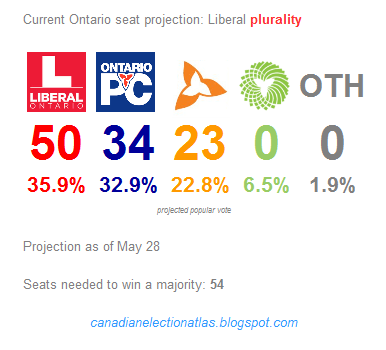 For this projection, I made two major tweaks to my model in an effort to correct for some strange results that it had been showing. This change however has created for some new strange results, which I will discuss later. The biggest tweak I made was accounting for incumbents who lost in the last election. Until now, my projection was mostly using the results from the 2011 election to project the results of this election. This is for the most part still true, but I needed to “tweak” the real results in a few of the ridings to reflect the fact that the incumbents in the 2011 election will not be on the 2014 ballot. In previous elections in Ontario, we have seen on countless occasions that there are huge swings when previous incumbents are no longer running. Take Chatham-Kent-Essex for example. In 2007, Liberal incumbent Pat Hoy easily won the seat with 52% of the vote, with the PC candidate winning just 29%. However, he did not run again in 2011, and in an open race, the Tories won the seat 42%-32%. This was a huge swing - one that many projectors (myself excluded) - did not predict correctly. Had Hoy been defeated by the conservatives in 2007, it stands to reason that the Tories, buoyed by incumbency, would have won the riding by an even larger margin in 2011. This effect is what I have tried to account for in this week's projection. To do this, I created estimates based on recent federal election results, to try and predict what the result of the 2011 election would have been with the candidates of 2014 in ridings where the 2011 incumbent lost (and will not be running in this election). These ridings are Prince Edward-Hastings, Perth-Wellington, London-Fanshawe, Lambton-Kent-Middlesex, Kitchener-Conestoga, Huron-Bruce, Algoma-Manitoulin and Hamilton Mountain.

The second major tweak to my model was in ridings that had by-elections since the last general election where the incumbent party was re-elected. In these ridings I replaced an estimated result that I had come up with (based on province-wide polling at the time of the by-elections) with the actual results of the 2011 elections. I did not change my estimates in ridings that did change hands in by-elections since 2011. This tweak in my model affected Vaughan, Ottawa South, Scarborough-Guildwood and Thornhill. I made this change because in these ridings, using the 2011 results in my model are likely to produce a more accurate projection of the election than using an estimate based on the by-election results. This is because possible by-election-specific factors could skew my model, for example in Scarborough-Guildwood, which had a higher than normal NDP vote in their by-election last Summer.  In ridings that did change parties in by-elections, the by-election results are more useful to use in my model, because they have a different incumbent party than in the previous election, meaning comparing the results to an estimate based on subsequent by-elections are more likely to produce an accurate projection.

Finally, I have also taken int account three riding specific polls released this morning byForum Research. These polls were conducted in the three Northwestern ridings of Kenora-Rainy River, Thunder Bay-Atikokan and Thunder Bay-Superior North. My projection model was very close to the poll numbers in Kenora-Rainy River, but overestimated the NDP (and underestimated the Liberal numbers) in the two Thunder Bay ridings. One thing the polls confirm is that Thunder Bay-Atikokan may no longer be considered a target for the NDP, even though they came very close to winning it in 2007.

Since my last projection, the Liberals have gone down a net two seats, the Tories are down a net three seats, and the NDP is up five. Polls have shown the NDP recovering in Toronto, which has put Davenport, Parkdale—High Park and Trinity—Spadina back in the NDP column, all at the expense of the Liberals. My projection also shows the NDP ahead in Oshawa and Niagara Falls, both at the expence of the Tories which I had ahead last week. Two seats have flipped from the Liberals to the Tories (Perth—Wellington and Haliburton—Kawartha Lakes—Brock) while three have gone in the opposite direction (Cambridge, Scarborough—Guildwood and Northumberland—Quinte West).

My projection tweaking really had the affect of pushing Liberal numbers down in ridings where they no longer had the power of incumbency. This resulted in Liberal numbers being re-distributed to other ridings, creating a new slew of surprise results. Perhaps the biggest surprise was in Cambridge, a riding that the Liberals have never won since it was created in 1975. The 2011 election saw a close race in Cambridge, because it was an open seat following the resignation of Tory Gerry Martiniuk. Recent polls have shown the Liberals actually doing better in Southwestern Ontario than in the last election, so this has also helped push Cambridge into the Liberal column. However, I personally feel this is an unlikely projection. In my opinion, the Tories now have the power of incumbency and riding history, and are therefore likely to hold on to the seat.

My tweaks in the 905 region, coupled with the Liberals and NDP polling better there than in the 2011 election has resulted in a couple of surprises as well. One such surprise is in Oshawa where my model now shows the NDP ahead. The NDP has a long history in Oshawa, but have not won the seat since 1990. Since then, the riding has slowly been trending more and more away from the NDP (in general) as the riding has become less blue-collar with more typical suburbanites moving in. Another surprise in the 905 (well, on the edge of the 905) is in Northumberland—Quinte West where my model shows a narrow Liberal lead. Personally, I think that this riding is one that is trending conservative in general (at least based on federal results), which is why I think the Tories will probably win it. However, the Liberals are running Lou Rinaldi again, who was the MPP for the riding from 2003 until 2011, when he lost in a close race to Tory Rob Milligan.

Finally my model continues to show the Liberals in the lead in Barrie. I'm still not convinced this will happen. I think for my next projection, I will come up with new estimated vote totals in ridings that were open seats in 2011 to try and come up with more accurate numbers in my model for those seats. This will at least correct for the odd projections in Barrie and Cambridge.

The basis of my model extrapolates the results of the 2011 election using regional polling averages from recent polls. If a party is polling at double the level they won in 2011, then that party would see its support double in each riding in the region my model. I have also taken into account recent by-elections, but projecting the results of the by-elections backward to the last election based on poll numbers from around the time of each by-election. That is, if a party did 5 points better than polls indicated they would've won in a by-election, then I have made their 2011 result 5 points more than they actually received in 2011.

I have also made further tweaks to my model based on a number of factors, such as candidate strengths. Please see above for more information about what tweaks I have made.