We are now into week 3 of the Ontario provincial election campaign, and it's now time for my second projection. Since my last projection two weeks ago, we have seen only a little movement in the polls, as voters are still waiting to make up their minds as to who to vote for on June 12. Two weeks ago, polls were split as to whether the Liberals or the Tories were leading in the polls, and that has not changed. In the last week, both EKOS and Forum Research have shown the Liberals ahead (37-30 and 38-35 respectively), while Ipsos shows the Tories with the lead (39-30). All three pollsters have the NDP in the low 20s. Averaged out, we get a small Liberal lead, with numbers that are very similar to the 2011 election. It is therefore no surprise that my projection shows a Liberal minority (or technically a “plurality”), just like in the last election: 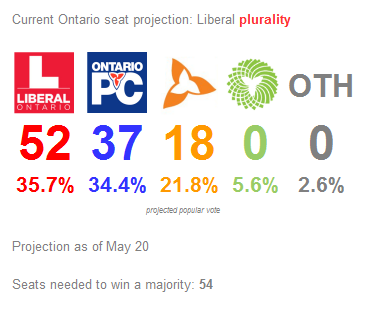 In addition to factoring in the Subdury riding poll, I have also factored in two other riding polls done by OraclePoll: one done in Sault Ste. Marie (done in conjunction with the Sudbury one) and one done in Don ValleyWest, the riding of Premier Kathleen Wynne.

Once again, I have yet to take into account local candidacy strengths in my projection, which has resulted in some more bizarre riding projections in my model. I do plan on factoring in a candidacy strength factor into my next projection following this coming Thursday, which marks the final day for candidacy declarations.

With the Liberals polling stronger than usual in the 705 area code, my projection still shows the Grits on top in Barrie as well as in Haliburton—Kawartha Lakes—Brock. The latter is usually a safe Tory seat, but the race was closer than usual in 2011, with the Liberals having an incumbency advantage. This was because they had won the seat in a by-election in 2009 caused by then-PC leader John Tory wishing to enter the legislature after failing to win a seat in the Assembly in the 2007 election. Voters in the usually safe conservative seat said “no” to Tory, and elected Liberal Rick Johnson instead. Johnson is actually running again, but my instinct suggests his support from 2011 is likely to have waned. Meanwhile, in Barrie- the riding is a bit of a Tory-leaning bellwether, so it may not be that inconceivable at this point that the Liberals would have a narrow lead. However, it still seems hard to believe.

Recent polls have shown a resurgence for the Liberals in Southwestern Ontario, which has led my projection to show the Liberals ahead in Perth—Wellington. Until 2011, the riding had been held by Liberal John Wilkinson, who had enough personal popularity to win the seat in 2003 to 2007 despite the riding being your typical rural conservative seat. However his popularity wasn't enough to keep the seat in 2011, when Tory Randy Pettapiece won the seat by just 210 votes. Without Wilkinson on the ballot this year, the Liberals are unlikely to win the seat back.

In Toronto, the populist campaign that the NDP has been running has alienated some progressive voters in the city, resulting in a decline for the NDP in regional polls in the city. This has resulted in my projection showing the Liberals now ahead in Parkdale—High Park and Davenport, as well as Trinity—Spadina, which I think is a more likely result than the other two. Parkdale—High Park is a bit of surprise, as I think its MPP, Cheri DiNovo is quite popular. Davenport is less of a surprise, but I still think the NDP will keep it, as the riding seems to be trending to the party. Another surprise in Toronto continues to be Scarborough—Guildwood. With Tory polling numbers higher than usual in the 416, Scarborough—Guildwood- which saw a close-ish by-election last summer- continues to be in the PC column in my projection. However, I think with the NDP's by-election candidate city councillor Adam Giambrone off the ballot, much of his support will go to the Liberals, giving them this seat.

The basis of my model extrapolates the results of the 2011 election using regional polling averages from recent polls. If a party is polling at double the level they won in 2011, then that party would see its support double in each riding in the region my model. I have also taken into account recent by-elections, but projecting the results of the by-elections backward to the last election based on poll numbers from around the time of each by-election. That is, if a party did 5 points better than polls indicated they would've won in a by-election, then I have made their 2011 result 5 points more than they actually received in 2011. (I've only done this for the NDP, the PCs and the Liberals, except for Thornhill where I only did it for the PCs and Liberals).

In the coming weeks, I will be doing further tweaks to my model based on a number of factors, such as candidate strengths. However, candidates are still being nominated, so they have been ignored for the time being. You can say that this model reflects polling data as if all candidates were the same as in 2011 (or recent by-elections).