We're now into the final stretch of the Quebec provincial election, with just three days to go before Quebecers head to the polls on Monday. Surprisingly, polls have been few and far between since my last blog post two weeks ago, and over that time there has been little change in the Liberal's lead over the governing Parti Quebecois. The two parties have fought it out in what has been described as one of the dirtiest campaign's in the province's history.

Due to the lack of polling over the last fortnight (and perhaps a bit of mid-election campaign fatigue on my part), I have held back on providing an update until now. Over this period, there have been just three province-wide polls released to the public. On March 23, Leger produced a massive poll of 3397 respondents with regional oversampling to provide data as to what is happening in Quebec's regions. This has meant dividing my model into the 12 regions defined by Leger, to come up with a more accurate projection of the Quebec election. The Leger poll was followed up by a Forum Research poll on March 31 and an Ipsos poll on April 1. We have also seen the release of three local riding polls in L'Assomption, Papineau and Nicolet-Becancour. All of these polls have been factored into my current projection map.

On top of the polls released over the last two weeks, I have further made tweaks to my model. The Leger poll showed Quebec Solidaire well below their 2012 election level on the Island of Montreal, and due to this, my model began showing the QS down to just one seat. I didn't feel comfortable with this outcome, so I gave QS a boost in the 2 seats they currently hold (Mercier and Gouin), similar to the boosts they've seen in those seats in the last two elections. This tweak may have proven unnecessary however, as the recent Ipsos poll had QS at 19% in Montreal, a full 7 points more than their 2012 totals. While this poll may be an outlier, it is possible that QS could pick up more than just the two seats they currently hold on Monday. Without anything other than circumstantial evidence, I can only speculate as to where they could pick up seats. I have already given them a boost in Laurier-Dorion where one of their co-spokespersons are running, as I see that riding has being a possible pick-up opportunity for the party. Another possibility for the QS is picking up Rosemont, which is not outside the realm of possibility, considering how left wing the area is. Also, the QS could pick up Sainte-Marie-Saint-Jacques where they did well in 2012, and are running the same star candidate in Manon Masse.

Another tweak I had made was in the riding of Sherbrooke. My model began showing the Liberals leading there following the huge Leger poll, but I felt that their strength in my model may be boosted by the fact that their former leader and Premier, Jean Charest was on the ballot in 2012. I attempted to rectify this by weakening the Liberals in my model. To do this, I made a calculation of how much “personal vote” Charest carried with him based on how much of a boost he got in the riding when he first ran in the seat in 1998. Despite the Liberals losing ground in the province-wide popular vote in that election, Charest saw a 3.7% swing from the PQ in the riding.

I of course may make further tweaks to my model before my final map on Monday. For example, one thing I've been concerned about in my model is the closeness of PQ leader Pauline Marois' seat of Charlevoix-Cote-de-Beaupre. The Liberals have won the seat in the past, but not since 1994. Due to the collapse of the PQ in the Quebec City region according to polls, Marois' numbers in Charlevoix in my model have her in a close race against her Liberal opponent. However, my gut tells me it's not as close as my model shows. I may make other changes to my model as well, so please stay tuned.

Changes since my last projection

Despite two weeks passing since my last post, there have been few changes on my map. Three seats have actually flipped from the Liberals to the PQ in the last two weeks. Two of them in the north: Abitibi-Est and Ungava. Ungava being coloured red in my last projection had me scratching my head since the seat has never gone to the Liberals before (despite having an Anglophone plurality). Abitibi-Est did make sense going Liberal though, as the riding is a bit of a bellwether. However, the Leger poll from March 23 showed the PQ having a massive lead in northern Quebec, so it makes sense that they would sweep the region's four ridings. The other seat my model showed flipping to the PQ is Saint-Maurice. This also makes sense, as the Liberals haven't won the riding since 1989.

To counteract these PQ gains in the last two weeks, my model shows two ridings flipping from the PQ to the Liberals (from my last projection). One of these seats is Dubuc, in the Saguenay region. This gain was the result of a strong Liberal showing in the Leger poll from their Saguenay-Lac-Saint-Jean-Cote-Nord region. It is possible that this Liberal strength in the region is concentrated in the riding of Roberval where Liberal leader Philippe Couillard is running. However, it makes sense that Dubuc would go Liberal as well, as the Liberals have won it as recently as 2008. The second riding that the Liberals have gained since my last projection was more of a surprise. This is in the riding of Nicolet-Becancour. This change was made as the result of a recent poll that showed the Liberals ahead there. This poll was a surprise for me, as not only did my projection have the PQ ahead there, but the Liberals have not won the riding since 1989. You can insert your concerns about riding polls now.

Another riding poll had me switch one more riding in my projection. A CROP poll produced for the CAQ indicated that their leader Francois Legault is ahead in his riding of L'Assomption. Since my last projection, I had attempted to tweak his riding to give him a boost, considering that the CAQ had strong numbers in the Laurentides-Lanaudiere region according to the Leger poll. I figured that a lot of this strength was coming from Legault's riding, but even after giving him a boost, it wasn't enough for him to lead in the riding. Apparently I should have given him a larger boost, if this CROP poll is to be believed. Personally, I do believe the poll, since I did have some suspicions that he may be leading in L'Assomption. This gain in my projections gives the CAQ a grand total of 4, up from 3 two weeks ago. However, I believe the CAQ could win more, as the last time they won 15-20% of the vote (as polls are currently showing them at), they won 7 seats (as the ADQ, CAQ's predecessor). If they do win more than 4 seats, the additional seats will likely be in the Quebec City region, where they won most of their seats in 2008. However, the Liberals are currently polling very well there, which is why I only have the CAQ at four seats province-wide, with only two in the Quebec City area. 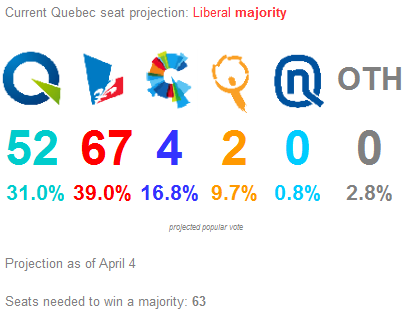 My current seat projection still shows the Liberals with a majority government, albeit a narrow one. The Liberals may have a commanding lead in the polls (my projection model gives them an 8 point lead), but due to wasted Liberal votes in safe seats, my seat projection doesn't give them much room to work with. My model is pointing to a similar scenario as the 2008 election, where the Liberals won a narrow majority, but won the popular vote by 7 points.

These are my current seat by seat projections. Riding background reflects how the riding voted in 2012: