Over the course of the last week, the Quebec political landscape has made a dramatic shift, if the polls are to be believed. Last week I reported that according to polls at the time, the PQ was headed for a slim majority government. Flash forward to this week, and it looks like the Liberals will be the party headed towards a majority.

As the campaign goes forward, there have been a number of events that could have caused the shift over the last week. Firstly, the appointment of media baron Pierre Karl Peladeau (aka “PKP”) as the PQ candidate in Saint-Jerome made big news, and recent polls have shown that voters are now less likely to support the PQ as a result. PKP  is a controversial character in Quebec politics, and leading a right wing media empire is sure to scare off some of the PQ's traditional left of centre base. Another cause for the shift might be controversial statements that some PQ candidates have made, such as the candidate in Gouin, Louise Mailloux, comparing baptism and circumcision to rape and making other controversial statements, and LaFontaine candidate Jean Carrière making Islamophobic comments and supporting far-right French politician Marine Le Pen. While Carrière was fired, Mailloux was kept, which shows --at least in part-- that the PQ is doubling down on these controversies, perhaps in an effort to show its base how nationalist they are. After all, most of the minority communities they are alienating live in safe Liberal seats. In addition to these controversies, it is possible that the Liberal campaign of scaring voters by suggesting a PQ majority would definitely lead to another referendum is working. Evidence of this could be seen in the leaders debate last night where PQ leader Pauline Marois acted very defensive about the issue, promising not to hold a referendum unless Quebecers wanted one.

Each of the four polling firms all have different ways of breaking down their regional numbers, so I had to create overlap regions to take into account the overlap between the regions defined by the different polling companies. For example, CROP appears to have a region called “Couronne de Montreal” (Crown of Montreal), which was described as being the 450 area code. The 450 is much larger than the Montreal Metropolitan Region which other pollsters used. This overlap region I have called the “Outer 450”, and consists of 13 ridings. I had to further divide this region because Forum Research divides its “Rest of Quebec” region into north and south (at the St. Lawrence), and this area includes the outer 450 as well. Both CROP and Ispsos Reid also separates the Island of Montreal from the surrounding area which meant that I had to divide those regions as well in my projection.

As for tweaking my numbers in individual ridings, I held off on making any new changes for the time being. One exception is in the riding of La Piniere where the PQ has confirmed they are not running a candidate. The incumbent Member in that riding, Fatima Houda-Pepin is running as an Independent after quitting the Liberal Party. Houda-Pepin, despite being a Muslim, is a fierce supporter of the PQ's controversial charter of values. The PQ decided they did not want to run a candidate against her. After much thought, I decided in my projection to use the PQ vote from the 2012 election as a base for her support. It's not perfect, but obviously without a candidate, most of the PQ vote could go to her. The point is moot though, as the seat is a safe Liberal one- that is unless Houda-Pepin carries a significant personal vote with her, which is rare for independents in Quebec politics. 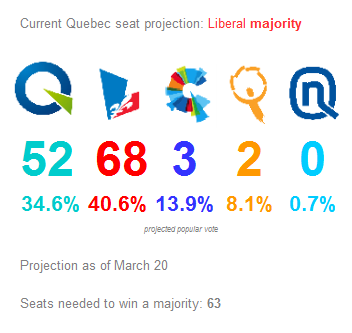 This week's projection shows a 12 seat swing from last week, with the Liberals picking up all 12 seats from the PQ for a total of 68. The PQ would win 52 seats, with the CAQ at 3 and the QS at 2 (no change from my last projection for either the CAQ or QS). Two of the 12 seats the Liberals have picked up since my last projection are in Laval (Sainte-Rose and Laval-des-Rapides; the latter has voted for the governing party in every election since it was created in 1981, and is Quebec's best bellwether). Two more gains for the Liberals in the inner 450 region would be La Prairie and Montarville (both ridings currently held by CAQ).  Out of the remaining eight seats where my projection has changed, one is in Quebec City (Jean-Lesage), while the remaining ridings are located outside the two major metropolitan areas: Abitibi-Est, Saint-Maurice, Ungava, Megantic, Richmond, Saint-Francois and Argenteuil.

Tomorrow is the last day to file candidacies before the election, so my next projection will take into account which candidates will actually be on the ballot.

Here are my current projections for each riding. Ridings are shaded based on how they voted in the 2012 election. In La Piniere, I have Independent candidate Fatima Houda-Pepin at 13.3%.

A note about the following tables: the percentages in each row may not add up to 100%, as I am waiting till after the filing deadline for candidates, and thus certain parties and independents are not yet included. 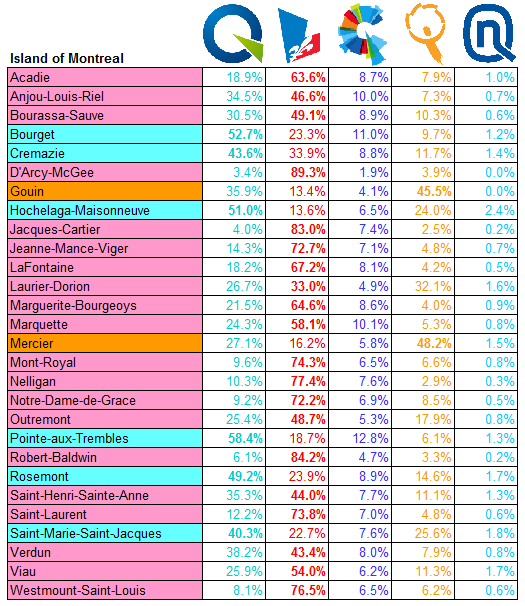 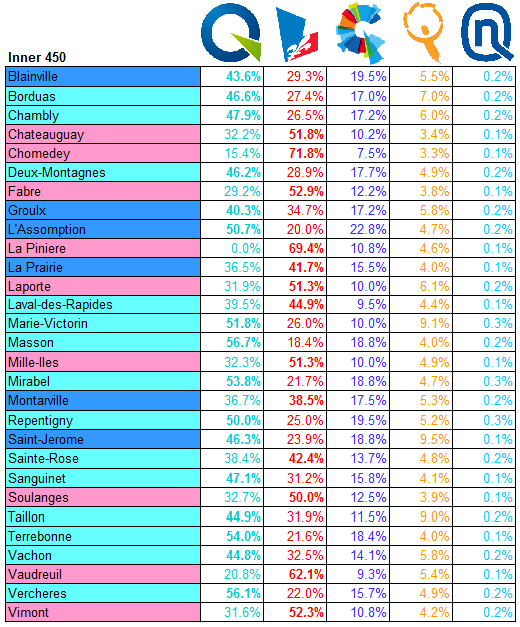 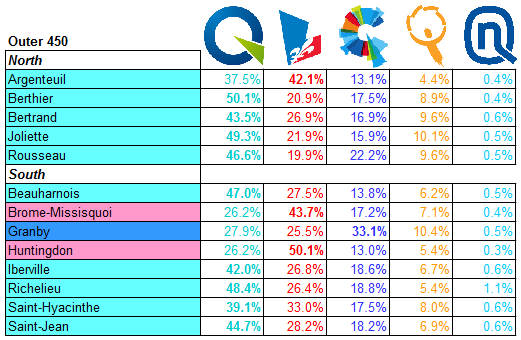 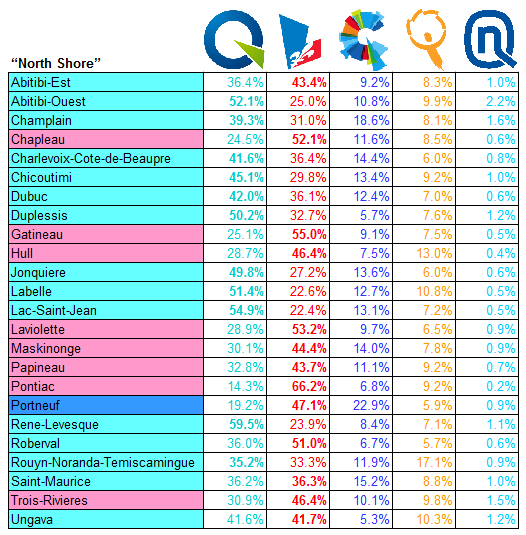 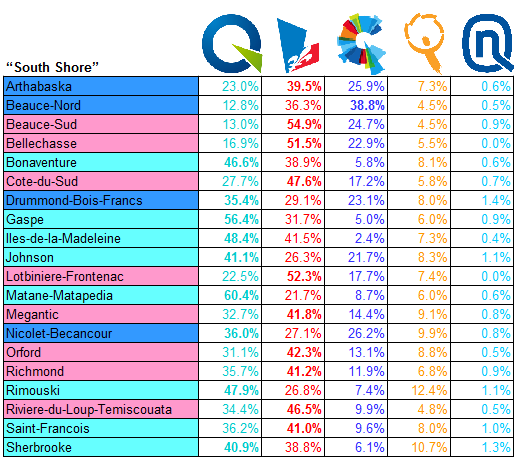 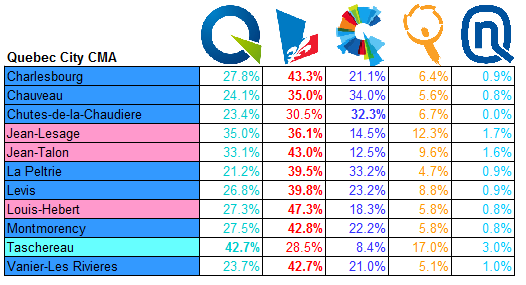