The Quebec election campaign is now in its second week, so it's now time to present my Week 2 projection map. For this map, I have tweaked my projection model to take into account two important factors that effect riding-level election results: a lack of incumbency and the presence of a party leader on the ballot.

The Quebec election will feature at least 14 seats with no incumbents (open seats). The results in these seats will no doubt have different trends in their results than seats that do have incumbents. In taking a look at open seats in the 2012 election, I noticed that the parties that saw a positive 2008-2012 swing across the province (i.e. CAQ [compared to the ADQ in 2008] and QS) saw an even stronger swing in open seats compared to seats with incumbents. Likewise, parties that saw a negative swing between the 2008 and 2012 elections saw stronger swings against them in open seats. The difference between the province-wide swing and the open-seat swing for all parties showed a similar ratio, averaging to be about 1:1.23. That is, for every 1% a party's share of the vote would swing in either direction province wide, their swing in an open seat would be 1.23%. For my model, I applied this ratio to the parties in each of the 14 seats that will have no incumbent on the ballot.

The second major tweak I applied to my model was the “leader bounce”. Liberal leader Philippe Couillard is running in the normally-safe PQ seat of Roberval. Couillard, being a leader of a major party in the province, is likely to see a large swing towards him on election day. To estimate how much of a swing he will get, I took a look at similar scenarios from the 2012 election. One similar-ish scenario was in the riding of L'Assomption where CAQ leader Francois Legault was running in. In L'Assomption, Legault was able increase the share of the CAQ vote (compared to its predecessor, the ADQ) by 23.7 points. This was much higher than the province-wide swing to the CAQ, which was 10.7%. Another similar-ish example was in the riding of Nicolet-Becancour, where Option Nationale leader Jean-Martin Aussant was running. Option Nationale didn't run in the 2008 election, so I compared his result to what Quebec Solidaire won in 2008, since they didn't run in Nicolet-Becancour out of courtesy to Aussant. Comparing the two results gave Aussant a 22% swing, a full 20.1% more than the province wide swing for the Opinin Nationale (which was from 0% in 2008 because they didn't exist for that election). I make the assumption that in both cases (for Legault and Aussant) that their swings were also inflated because Legault was running in an open seat, and Aussant was the incumbent in his riding (he was elected as Pequiste in 2008). To calculate the estimated boost that Couillard could get, I took the average swing above the province-wide swing in both cases, and reduced it to factor in the fact that Couillard will be running in a seat that already has an incumbent, PQ MNA Denis Trottier.

I also created a second “leader bounce” estimate for Quebec Solidaire co-spokesperson Andres Fontecilla who is running in the Montreal riding of Laurier-Dorion. For most of its history, Quebec Soildaire was led by both Amir Khadir and Francoise David as "co-spokespeole". However, their party constitution states that only one co-spokesperson can sit in the National Assembly, so when both Khadir and David were elected in 2012, Khadir stepped down as co-spokesperson, and was replaced by Fontecilla. Fontecilla will likely see a boost in his share of the vote in Laurier-Dorion, much like Khadir and David saw in their ridings over the last two election. The question is, how much will Fontecilla's boost be? To calculate this, I took a look at the average swing that both Khadir and David saw in 2008 and 2012 in their ridings and compared it to the QS province-wide swing in both elections. Their swing came out to be an increase of about 8.1%, with an average of 5.5% coming from the PQ and 2.3% coming from the Liberals (the rest coming from minor parties). To calculate what Fontecilla may get on election day, I used these averages to factor in my projection for Laurier-Dorion.

In Roberval, my tweaks pushed Couillard into a narrow lead over his PQ opponent. In Laurier-Dorion, my projection tweaks put Fontecilla in a close race with Liberal MNA Gerry Sklavounos, however I still have Sklavounos ahead. The other projection tweaks I made for the open seats didn't result in much change, however they could play a factor if polls change dramatically.

Outside of these tweaks, I also inputted three new polls into my projection. Forum Research released a poll last week, and CROP released a poll on Monday. In addition, Leger published a Quebec City regional poll this morning. Forum Research's regional breakdowns divided the Rest of Quebec region into “North Shore” and “South Shore” which I can assume refers to whether or not the respondent was north or south of the Saint Lawrence River. Because of this, I have also split my projection model "rest of Quebec" region into two. CROP unfortunately did not publish their regional breaks, so I divided their results proportionally based on the Leger poll from earlier in the campaign and the Forum poll. For my projection, I have included both the Forum Research and CROP polls, the Leger Quebec City poll from today, and the Leger poll I used last week, but replacing their Quebec City numbers with their new poll. 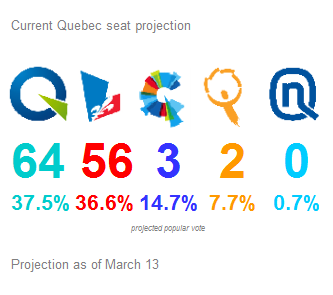 Changes from my last map

With these changes, the PQ still is sitting in majority territory, but just barely- with 64 seats in the 125 seat assembly.  63 seats are needed to win a majority. 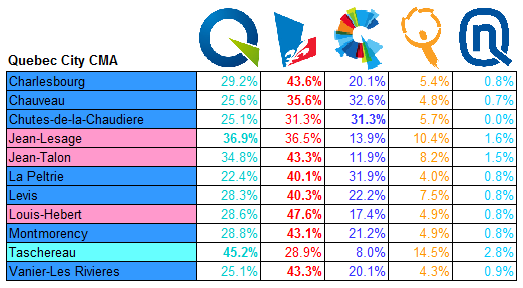 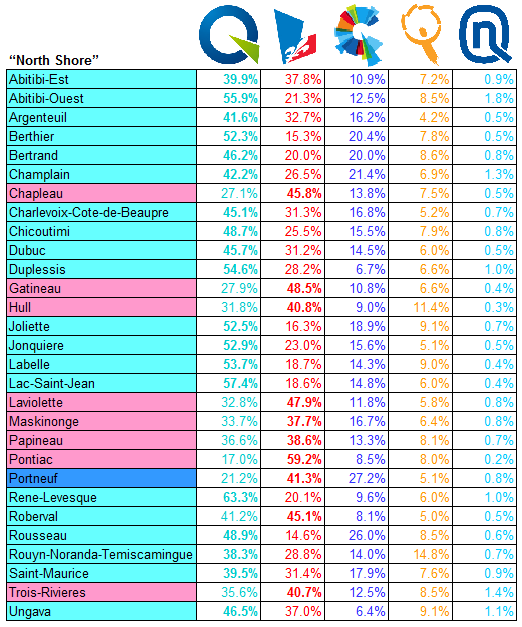 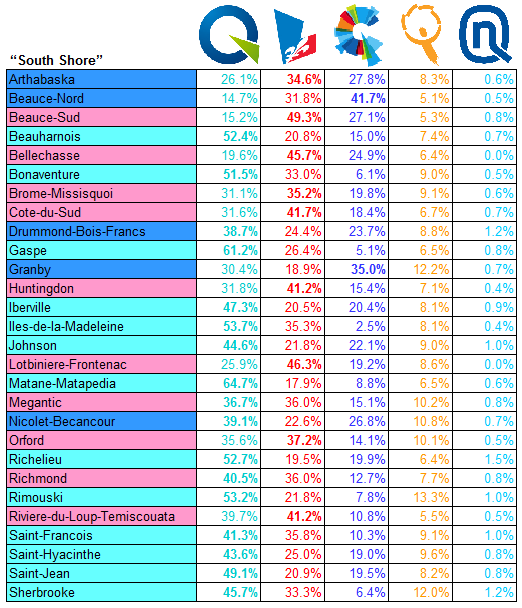 I plan on making further tweaks to my model as the campaign goes on. If you have any suggestions as to what tweaks I should make, please let me know, by commenting here, emailing me, or by sending me a message on Twitter.