It is election day in Quebec, and it is time for my final prediction. If the polls are to believed, this race is going to be a three way between the separatist Parti Quebecois, the governing Liberals and the upstart centre-right Coalition Avenir du Quebec. For the last week or so of the campaign though, it looks like the PQ will win the election. But the question will be if they get a majority, and whether or not the CAQ can surpass the Liberals to form opposition.

For my final prediction, I analyzed the regional breakdowns of the final Leger Poll as well as the mostrecent Forum Research poll I had available to me (they came out with a new one just a few hours ago, which I will have to ignore). I have also looked at a number of individual riding polls, riding history, and a little gut instinct to come up with my numbers. And the conclusion I came to is that the PQ will indeed win a majority government, but by just 2 seats. The Liberals will narrowly get official opposition with 33 seats, which would be their worst showing since 1976. Also, the Liberals are set to get a record low in terms of share of popular vote. Anything less than 33% of the vote will do that, and they have been polling lower than 30% routinely. While the PQ may win the election, they will probably go down in their vote share as well from the previous election, and votes are likely to be siphoned off to the CAQ.

Here are my riding by riding numbers:
(Ridings projected to be decided by less than 3% of the vote are shaded in grey) 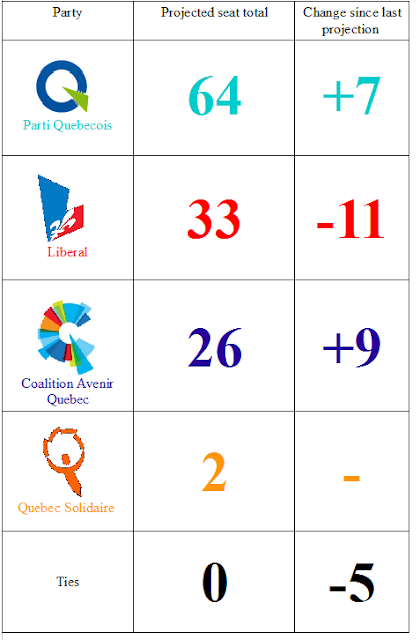 "The Toss ups"
There are a lot of toss up ridings, so I will only touch up on the few that I have figured will have the top two parties within 3%. But, with so many variables and likely scenarios in place, these are really just a  random set of "toss ups":

Blainville
This Montreal suburban riding has a CAQ incumbent, which one might think would automatically make this a likely CAQ win, but the incumbent, Daniel Ratthe was elected as a PQiste and then switched parties. It wasn't the worst decision for Ratthe though, as this riding went for the CAQ's predecessor the ADQ by 9 points in 2007. And 2012 is looking a lot like 2007. And so, I picked Ratthe to win this race.

Champlain
This Mauricie riding went ADQ in 2007 by 14 points. However, the MNA crossed the aisle to join the Liberals and was subsequently defeated by the PQ in 2008. Even without an incumbent, the ADQ did fairly well getting 22% of the vote that election. I expect them to pick this up.

Drummond-Bois Francs
This Central Quebec riding is brand new, having been created out of Drummond and Richmond. The redistributed results from show the Liberals won 40%, the PQ with 32% and the ADQ with 25%. However, there is no incumbent running in this riding, and the CAQ candidate is a former ADQ MNA. With the right swing, the CAQ should pick up this seat.

Gouin
Now to the Island of Montreal, one of the more exciting races will be to see if Quebec Solidaire co-leader Francoise David will be able to win the party's second riding. With the way the party is polling on the island, they should be able to pick this seat up. And since they are targeting this seat, they are likely to win this by even more than I projected.

Groulx
This is another suburban Montreal riding that will be one to watch. It is an open seat that the PQ won by just 400 votes last election. However, the CAQ has a shot at winning the seat, which the ADQ won by 9 points in 2007. However, their MNA from that election is running for the Liberals. Despite that, this will be a CAQ-PQ race that I think the CAQ will prevail in.

Laporte
The south shore will also see a lot of fierce battles, including this one in Laporte. The Liberals are in danger of losing this seat which they have held since 1981.This area has been trending to the PQ over the years, and this year might be the year they finally win it back. However, I don't think the 16 point deficit they face will be enough to pick it up.

Laurier-Dorion
This riding on the Island of Montreal is usually a safe Liberal seat. However, the PQ did manage to win the riding in a 2004 by-election, only to lose it again in the 2007 general. With the Liberals really tanking in Montreal though, I feel the PQ should be able to pick this seat up.

Lotbiniere-Frotenac
This is another new riding, located in the conservative Chaudiere-Appalaches region. The redistributed results from 2008 showed the Liberals getting 48% of the votes here and the ADQ in second with 29%. Will that be enough of a deficit for the CAQ to over come? I think so.

Megantic
This is another new riding, nestled in the Eastern Townships on the US border. The Liberals would have won this seat over the PQ by 8 points according to the redistributed results from 2008. The area has never voted for the PQ before, however, but 8 points is not much to overcome. I believe the PQ will make history in this riding by winning it for the first time ever.

Mille-Isles
The Liberal incumbent is facing off against former BQ MP Robert Carrier who is running for the PQ in this Laval riding. Redistribution made this seat safer for the Liberals, but at this point no gerrymandering would be possible to help the Liberals in some areas. I believe Carrier should be able to win this seat.

Mirabel
This exurban riding west of Montreal seems like prime territory for the CAQ. The ADQ won the seat by 10 points in 2007, only to lose in 2008 by 25%. However, I think the CAQ should be able to pick this off from the PQ.

Nicolet-Becancour
This is another must-watch riding located on the south shore of the St. Lawrence half way between Montreal and Quebec City. This is a must watch race because it is the only realistic chance for the Option Nationale party to win a seat. Their leader, Jean-Martin Aussant is running in the riding and he also happens to be the incumbent MNA, having previously been elected as a PQiste. The ON is an orthodox separatist party that sees their victory as being a mandate for sovereignty. A riding specific poll showed Aussant with a good chance of winning, being behind the CAQ by 3 points. With that poll being the only reliable way of knowing how much his support is, I have no choice but to base my prediction on it. I believe the CAQ will in it in a close one.

Rouyn-Noranda-Temiscamingue
The Liberals may be the incumbent party in this northern Quebec riding, but the numbers suggest this race will be between the CAQ and the PQ. The Liberal incumbent is not even running again. The ADQ never won this seat, but their 17% showing in 2008 was very strong for the party in that election, especially with no incumbency advantage. The party only won 27% in the previous election. It's tough to say how well the CAQ will do here, so the safe bet is on the PQ.

Saint Henri-Sainte Anne
This Montreal riding has gone Liberal in every election since 1981, but the PQ have been inching ever closer to getting it back. Having only lost the seat by 9 points in 2008, they are poised to win the seat for the first time since 1976. It will be close, but I think with declining fortunes, the PQ will win here.

Sherbrooke
Possibly the most important race to watch will be Sherbrooke, the Premier's riding. Somehow Charest has been able to win this seat over and over again, even as a federal Tory in 1993, when he was one of only two members of his party to get elected. Charest has had many scares, and this election will be his toughest. There have been three riding polls conducted here, and he trailed in all three. He has been closing the gap though. The first poll showed a 15 point disadvantage. The second showed a 13 point defeat, while the most recent showed a 2 point loss. My model shows the race as a tie. I am not sure if the most recent poll is an outlier or indicative of a large swing, but I believe the safest bet here is to call a PQ win, with Premier Charest being ousted.

Soulanges
My model shows this riding to have all three major parties within 1 point of each other. The CAQ probably wont win the seat though, as the ADQ was never able to win the seat. The PQ only lost the riding by 9 points in 2008, so they have a good shot to win the seat. However, I think the Liberals will probably eke this one out.

Verdun
On the surface, Verdun appears to be a safe Liberal seat. It has never voted for the PQ. However, this election may be very close there. The Liberals are down massively in Montreal, and their 13 point victory here in 2008 may get erased. The PQ are running a heavy weight in former MP Thiery St-Cyr. In the end though, history is on the Liberal's side, and they are the safe bet at retaining this seat.

To wrap up this post, I thought I would post two maps to help you out as you follow the election this evening. The first map just labels each riding, while the second map is the redistributed results of the 2008 election with the current riding boundaries. Enjoy!