The race for mayor in Manitoba's second largest city is expected to be a close one between current mayor and former NDP MLA Shari Decter Hirst and former Deputy Mayor Rick Chrest. Chrest, who also has a background in business has been described as a centrist in contrast to the life-long New Democrat in Decter Hirst. Decter Hirst's mayoralty has been dogged by controversies over the last four years, but nonetheless could still eke out a victory. There haven't been any recent polls that I could find, but one conducted in January by Probe Research showed that Decter Hirtst was losing to Chrest by 5 points. However, that was a whole 10 months ago. There are two other candidates running for mayor, former teacher John Pauld Jacobson and businessman Mark Kovatch.

In 2010, Decter Hirst unseated the incumbent mayor Dave Burgess, a Tory. Dexter Hirst won every ward in the city, despite only having won by 1500 votes. Burgess won a few polling stations in the more suburban, conservative-leaning suburbs in the western part of the city. However his support was not concentrated enough to win any wards. He came the closest to winning Linden Lanes Ward in the southwest corner of the city, which he lost by just three votes. Decter Hirst's strongest areas were in the more left-leaning central parts of the city. Her best ward was Rosser Ward which covers the city's downtown. If there's one ward Decter Hirst wins today, it will be Rosser. Chrest is likely to win a number of the wards in the western part of the city, and possibly some in the east part of the city, where he's from. 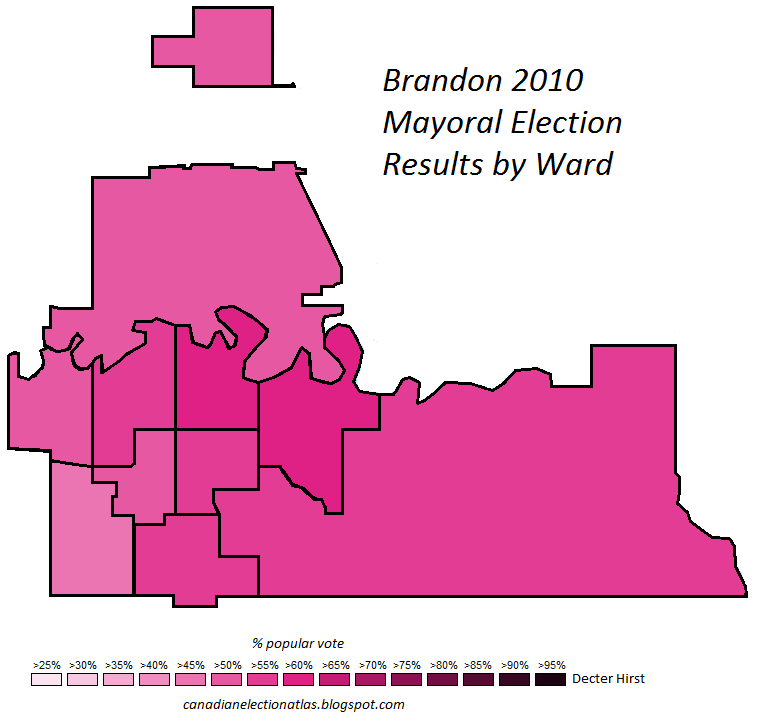 By far, Manitoba's largest city is Winnipeg, which is home to more than half the province's population. The race for mayor of the city will be a free-for-all, as outgoing mayor Sam Katz will not be running again. The race to replace him is expected to be quite close between former NDP MP Judy Wasylycia-Leis and centre-right candidate Brian Bowman, the former chair of the Winnipeg Chamber of Commerce. A poll released by Inisghtrix Research conducted earlier this month showed Bowman leading 38% to Wasylycia-Leis' 36%. University of Manitoba administrator Robert-Falcon Ouellette was at 14% and former city councillor Gord Steeves was at 9%. Wasylycia-Leis had been leading in polls for most of the campaign, but now that the election is here it appears the conservative vote in the city has coalesced behind Bowman, and could be enough to put him in the mayor's chair. Other candidates in the race are exotic dancer booking manager Michel Fillion, city councillor Paula Havixbeck and public administration executive David Sanders.

Wasylycia-Leis ran for mayor back in 2010 as well, losing to Katz 55% to 43%. Katz had been mayor of the city since 2004, when he won a rare mayoral by-election to replace outgoing mayor Glen Murray who would later become a cabinet minister in Ontario. In 2010, Katz won 11 of the city's 15 wards, while Wasylycia-Leis won the remaining four wards. His strongest wards were in the west end of the city, which is also the most conservative part of the city. His strongest ward was Charleswood-Tuxedo where he won 70% of the vote. This ward covers three of the city's four Progressive Conservative-held ridings in the Manitoba Legislative Assembly. Wasylycia-Leis' four wards were in the north and central part of the city, Winnipeg's traditional working class and staunch NDP voting areas. Her strongest ward was Daniel McIntyre, which covers the Minto and Wolseley areas in the central part of the city. Interestingly, this area is in the federal riding of Winnipeg Centre, which was never held by Wasylycia-Leis herself. Wasylycia-Leis represented neighbouring Winnipeg North, which is still an area she did well in.

Winnipeg has historically been a very polarized city between its working class left-leaning north side, and the wealthier right-leaning south and west. In order to win elections in the city, parties and candidates have to be able to bridge this gap. The more centrist provincial NDP have been able to do this very successfully in recent provincial elections. In the 2011 election, only five of the city's 31 ridings did not go to the NDP. For the NDP, this meant winning several seats (a majority, in fact) in the south end of the city. Federally, the Conservatives have been able to bridge this gap in recent elections. They hold all but two seats in the city, including the (former) NDP stronghold of Elmwood—Transcona. Sam Katz also bridged this gap in the mayoral election in 2010. For Judy Wasylycia-Leis, she needs to not only win the north side, but break into the more wealthy south side of the city. For Bowman, he needs to hold on to most of Katz's wards in order to win. 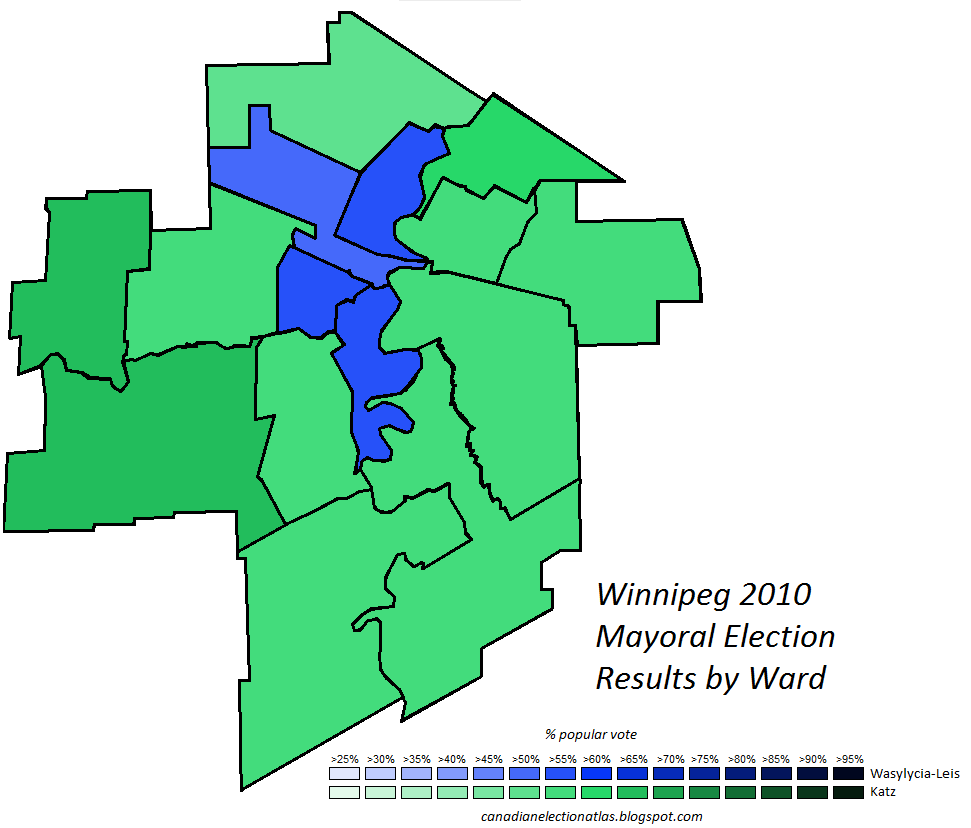 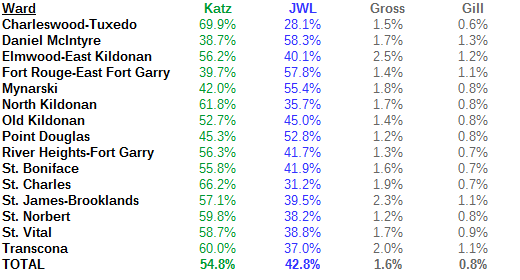 It is quite fortunate for political watchers that both of Manitoba's major cities will see exciting elections today, with two candidates representing very different visions in each city. Polls close tonight at 8pm local time, or 9pm Eastern.