Four federal by-elections will be held on November 25, one in Quebec (Bourassa), one in Ontario (Toronto Centre) and two in Manitoba (Provencher and Brandon-Souris). Up until that date, I will be profiling each of the four ridings. Today I will take a look at Bourassa.

Bourassa is located in the north end of Montreal, containing most of Montreal-Nord Borough, as well as parts of the Districts of Sault-au-Recollet and Riviere-des-Prairies. It was vacated on June 2 when its MP, Liberal Denis Coderre resigned to run for mayor of Montreal (which he won, in elections held earlier this month).

Bourassa has been centered on the Montreal Borough of Montreal-Nord since its creation in 1966. Almost the entire borough is in the riding, and over 80% of the riding consists of the borough. Since its creation in 1966, the riding has generally moved northward. In 1966, it included the Sault-au-Recollet neighbourhood, which is now in the Borough of Ahuntsic-Cartierville. In 1976, the riding only contained part of Sault-au-Recollet, and by 1987 the riding just included Montreal-Nord. In 1996, the riding’s boundaries shifted northward to include part of Riviere-des-Prairies District. The most recent re-distribution had the riding gain even more of Riviere-des-Prairies, but also grow south to include part of Sault-au Recollet again.

Bourassa was created in 1966 from parts of Mercier, Dollard and Laval. However, the Montreal-Nord portion of the riding, and indeed all of the riding with today’s boundaries was found in the riding of Mercier.

The riding is set to move southwards again following according to the final report of the redistribution commission. The report has the southern boundary becoming Autoroute 19, which would give the riding all of Sault-au-Recollet District, and has the northern boundary becoming Autoroute 25, which would have the riding losing its part of Riviere-des-Prairies.

Since World War I, the area has been fairly safe for the Liberals. Since then, the Tories only won the area in the Diefenbaker sweep of 1958 and under Mulroney in 1988. The Bloc was only able to win the riding in 1993 at the height of its popularity.

Since first being elected in 1997, Coderre enjoyed comfortable victories, usually by at least 10 points. From 1997 until the 2011 election, the Bloc Quebecois has been Coderre’s main adversary in the riding. The Bloc came closest to winning back the seat in 2006, when their candidate Apraham Niziblian lost by 5000 votes. However, the closest race Coderre had to face was in 2011, and it wasn’t against the Bloc, it was against the NDP. Coderre was spared from the “orange wave” that hit the province by a 3,200 vote margin. The Bloc finished third, 11,000 votes behind Coderre.

In 2008, Coderre won the riding handedly, defeating the Bloc’s Daniel Mailhot by 9,700 votes. The Tories and NDP were a distant third and fourth respectively.  Mailhot won just 11 polls (tying in 2 others). 8 of these polls (plus the 2 ties) were in the southern half of the riding, including 3 (plus one tie) in Sault-au-Recollet. However, the strongest poll for the Bloc was #63, located adjacent to Parc Le Carignan in Ovide-Clermont District, where they won 48%.  Coderre’s strongest poll was #13-1, where he won 73% of the vote. This poll is located in Riviere-des-Prairies, on its western border, on 4th Avenue.


In 2011, the NDP orange wave swung every single poll in the district towards the party (for an average swing of 17%), but it was not enough to win the riding. Coderre won the riding with 41% of the vote, while the NDP’s Julie Demers won 32%. The Bloc’s Denis Mailhot ran again, but was reduced to 16%, while the Tories won 9%. The NDP was able to win about 40% of the polls, while the Liberals won the rest. The Bloc tied the NDP in one poll, one of only a handful where the Liberals finished 3rd.  The strongest NDP poll was #73, where they won exactly 50% of the vote. This poll is located next to Parc Aime-Leonard in Marie-Clarac District, and went Liberal in 2008. The strongest Liberal poll was #51 where the Liberals won 60%. This poll is located in the eastern part of the riding, in Ovide-Clermont District, between Normandie Street and Auger Ave. 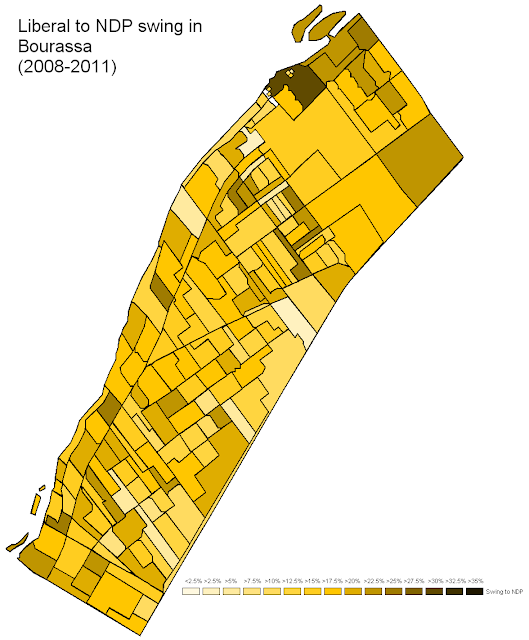 Because the National Household Survey has not released data by census tract, the only way to map the demographics of the riding using 2011 data is to look at mother tongue, which was asked on the short form census and is therefore available at the census tract level. French is the largest native language in every census tract in the riding, but in terms of second most spoken languages, there are large clusters of Italian, Creoles and Arabic speakers. The Creole speakers are concentrated in Montreal-Nord Borough, in the central-east part of the borough, and in the northwest of Ovide-Clermont District. Italian speakers are concentrated in the rest of Ovide-Clermont District, but are the highest in Rievere-des-Prairies. Arabic speakers are concentrated in the southern half of Marie-Clarac District.


Due to the high percentage of Haitians in the riding, two of the political parties have attracted candidates of Haitian origins to the campaign. The Liberals are running Emmanuel Dubourg, who was born in Haiti, and was an MNA representing neighbouring Viau riding in the provincial assembly from 2007 until he resigned to run in the federal by-election in August. The NDP will probably be the largest threat to the Liberals again. The NDP is also running a native Haitian in Stephane Moraille. She is a lawyer, but is probably best known being in the Juno Award winning band “Bran Van 3000”. The Bloc is running Daniel Duranleau, who is a former school trustee with the Montreal School Board who represented Hochelaga-Maisonneuve Borough, which is outside the riding. The Tories are also running a Black candidate, but not a Haitian. Running for the Conservatives is Rida Mahmout, a native of the Ivory Coast. He is an architectural technician. Finally, the Greens originally had a star candidate in former hockey player (and ethnic Haitian) Georges Laraque. However, he stepped down as candidate and as Deputy Leader of the Greens after fraud charges. Laraque was replaced by Danny Polifroni, an ethnic Italian, who ran for the provincial Greens in 2012 in neighbouring Laurier-Dorion riding.

With Bourassa being only one of 34 ridings in the entire country to go Liberal in 2011, there is little doubt that the Liberals have the advantage here, now that they are leading in the polls. Local riding polls show this as well. Forum Research’s most recent poll from November 5 shows the Liberals well ahead of the NDP, leading by a 56%-19% margin. The Bloc may also be competitive for second place, as the poll showed them at 17%. Both the Tories and Greens were in single digits. Since the poll was taken however, Liberal leader Justin Trudeau has taken a hit in the media for some controversial things he has been up to, so we will see if they can keep their large lead in the riding. If voters wish to dump the Grits, they are going to have to chose to back either the NDP or Bloc, as they are now splitting the vote.
Posted by Earl A. Washburn at 10:22 AM