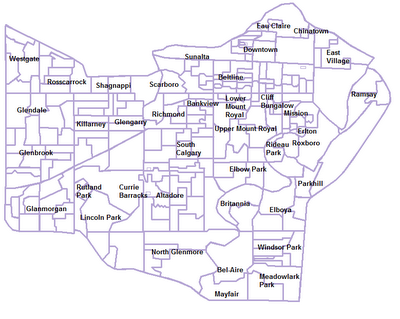 Calgary Centre is located in central Calgary, Alberta's largest city. It includes the city's central core, as well as some surrounding inner-suburban areas. Its bounded on the north by the Bow River and Bow Trail, on the west by Sacree Trail, on the south by Glenmore Trail and on the east by the CPR railway.

Demographics:
The riding is 79% White, with Chinese being the largest visible minority at 6%. 3% of the population is Black and Aboriginals make up 2% of the population. 73% of the riding has English as their mother tongue, 4% have Chinese as their mother tongue, while just 2% have their native language as French. 33% of the riding is Protestant and 25% is Catholic. Islam is the largest non Christian religion in the riding, with 3% of residents being Muslim. 30% of residents have no religion at all.. In 2005, the median income of the riding was $30,729, making it the 10th richest riding in Alberta.

History
The riding was created in 1968, and until the most recent redistribution ten years ago, consisted of parts of central Calgary on both sides of the Bow River. While the riding has always elected right of centre candidates since its creation, the riding- when it crossed the Bow River united the two most traditionally progressive parts of the city together. Redistribution in 2004 split these two areas apart by moving Calgary Centre south of the Bow River, and creating the new riding of Calgary Centre-North north of the Bow. Between 1953 and 1968, most of what is today Calgary Centre was in the riding of Calgary South. Between 1917 and 1954, the area was divided between various incarnations of Calgary West and Calgary East. And, from 1904 to 1917, the area made up a very small section of a large riding known as “Calgary” that consisted of more than half of Southern Alberta, and-when it was created even part of today's Saskatchewan (back then it was part of the Northwest Territories).

As mentioned, the riding has been dominated by right of centre candidates ever since the area started voting for Members of Parliament. Only in two elections (1940 and 1963) has the area voted for a Liberal. And, in only two elections aas the area voted for a left wing candidate, electing Labour candidates in 1921, and in 1926 (only in Calgary East). The area is a dead zone for the NDP at present. The Liberals do have some strength in the riding on the provincial level, as the downtown riding of Calgary-Buffalo is currently held by the provincial Liberals. The riding is known for electing some moderate conservatives. Outgoing MP Lee Richardson being one example. In 2000, former Prime Minister Joe Clark, a red Tory won this seat in a close race against the more conservative Canadian Alliance candidate. 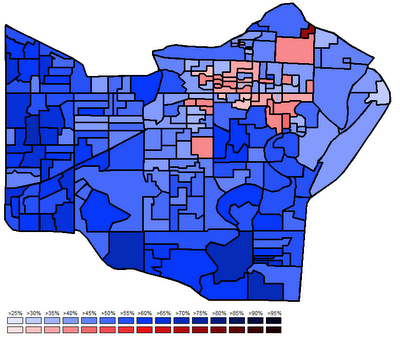 With Joe Clark retiring from politics, Calgary Centre (called Calgary South Centre in 2004) would become an open seat. The newly created Conservative Party would be the clear front runners to win the riding, and they would recruit former MP Lee Richardson to be their candidate. His main challenger would be the Liberal candidate, lawyer Julia Turnbull. Richardson would end up winning the seat by nearly 11,000 votes- which would end up being the closest race for him in this seat. Richardson would win most of the polls in the riding, doing the best in the more suburban southern and western fringes of the riding. He would do especially well in neighbourhoods such as Glendale, Glanmorgan, Bel-Aire and Windsor Park. The more urban central part of the city was worse for Richardson, and was the only part of the riding where the Liberals won any polls. In fact, the Liberals won quite a few polls in the western half of the Beltline, they would win the Cliff Bungalow neighbourhood, win quite a few polls in Bankview, and do very well in Chinatown. The best Tory poll came in poll 211, which is located in Bel-Aire, on the south side of the riding. The poll includes the Calgary Country Club, and is very wealthy. Richardson won 75% of the votes there. The best poll for the Liberals was poll 90, in Chinatown. The Liberals won 76% of the vote in the poll, which would be the only poll where they even broke 50%. 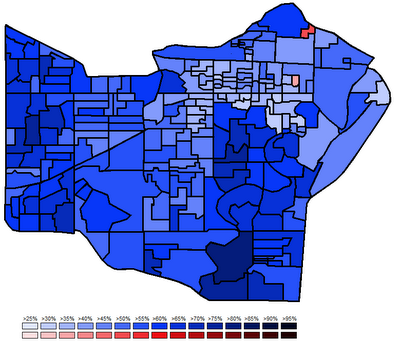 In 2006, Richardson's main sacrificial lamb opponent was Liberal architect Heesung Kim. Richardson defeated Kim by nearly 20,000 votes. Richardson won all but two of the riding's polls, and did his best in much of the same parts of the riding. His best neighbourhoods would be Glendale, Upper Mount Royal, Bel-Aire and Mayfair. His worst neighbourhoods were in places like Lower Mount Royal and Cliff Bungalow, but he still won all the polls in those neighbourhoods. The Liberals won just two polls, one in Chinatown (once again, their best poll – poll 90) and the other one was in the eastern end of the Beltline. Poll 211 in Bel-Aire would once again be the best Tory poll, where Richardson won 82% of the vote. The Liberals would win 51% in their best poll in Chinatown. 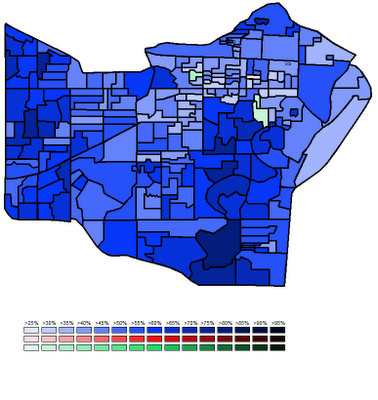 2008 was a rematch between Richardson and Kim, but also with a strong showing by Green candidate Natalie Odd. Richardson's lead would be cut down to 17,000 votes over Kim. Odd would be 600 votes behind Kim. Richardson's strength came from the same neighbourhoods he did well in back in 2006. He won all but four polls in the riding. The Greens would win three polls, two in Cliff Bungalow and one in the western end of the Beltline. The Liberals won just one poll, also in the Beltline. The top poll for the Tories would continue to be poll 211 in Bel-Aire, for the third election in a row. Richardson took a small hit in that poll, dropping to 80%. The top Liberal poll (poll 106) was not even the one they won. They would win 33% of the vote in 106, and would lost the poll by two votes. Their third best poll, 103 was the one they won- with less than 30% of the vote, thanks to a four way split. Both polls are in the Beltline district. The best Green poll would be 61, where they won 37% of the vote. This poll was also in the Beltline, west of 14 St at 14 Ave. 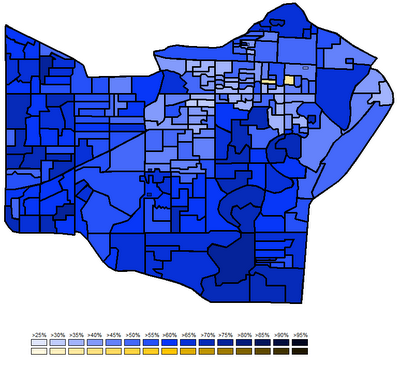 In 2011, Richardson would return to his 20,000 vote margin, defeating the Liberal candidate Jennifer Pollock. The NDP also did their best in the riding since 1988 by winning 15% of the vote, and losing by 21,000 votes. Richardson once again dominated the riding, winning all but two polls. Those two polls actually going to the NDP. Richardson's strongest neighbourhoods would remain mostly the same, as he would do especially well in Rosscarrock, Glendale, Glanbrook, Glanmorgan, Eau Claire, Upper Mount Royal, Rideau Park, Elbow Park, Britannia, Bel-Aire, Mayfair and Meadowlark Park. The two NDP polls would both be in the Beltline neighbourhood in the central city. The Beltline, Cliff Bungalow, Lower Mount Royal and Bankview would be the worst neighbourhoods for Richardson. The best poll for the Conservatives would be poll 404 this time. This poll consists of a very upscale retirement residence in Altadore known as “Manor Village of Garrison Woods”. Richardson won 81% of the vote there. The Liberals didn't win any polls, but their best poll was 151 in Bankview where they won 28% of the vote, losing to the Tories by 4 votes. The strongest NDP poll was 103 in the Beltline, consisting of two city blocks surrounding the Beaulieu Gardens. The poll consists of a series of Apartment Buildings, as well as Lougheed House. The NDP won the poll with 38% of the vote.

Richardson resigned back in May to take a position with the Redford government. If you just take a look at the 2011 election results, then the riding should be considered the safest of the three by-elections today. However, polls indicate that the riding will be the closest. The Liberals, in particular are really making this race one to watch. The Conservative candidate is journalist Joan Crockatt. Running for the Liberals is writer Harvey Locke, who also ran for the provincial Liberals in 1989. The Greens are also running a journalist/writer in Chris Turner. The NDP is running community activist Dan Meades.

The Conservatives may have shot themselves in the foot here by nominating Crockatt, who is seen on the right of the party. Anywhere else in Alberta, or even Calgary, she would be a good fit, but this riding is known as a “Red Tory” seat. This has given the Liberals the boost they need to make the race competitive. The most recent Forum Research poll showed Crockatt ahead by just 2% - 32%-30% over Locke. The Greens also polled quite well, with Turner 23%. Meades would win 12% according to that poll, a disappointing result for the NDP. However, since that poll was taken, the Liberals have done some of their own foot shooting, with some anti-Alberta comments coming out of my former MP, David McGuinty. Some more anti-Alberta comments made by potential Liberal leader Justin Trudeau that he made a couple of years ago have also come out and have fueled anti-Liberal sentiment in the riding, and have evoked ghosts of the past (especially in the case of the Trudeau clan). A more recent poll conducted by Return On Insight conducted while the scandal ocurred shows Crockatt with a 5 point lead over Locke (37-32). Turner dropped to 17%, and Meades was still at 12%. This showed some late movement from the Greens to the Liberals, but also from the Liberals to Tories. It remains to be seen whether the Greens might end up benefiting from the negative comments, as progressive voters in the city search for a candidate to rally behind. And, there has been a concerted effort to do so. The last close election in the riding was back in 2000 when Joe Clark defeated the Canadian Alliance. Perhaps we're looking at a similar race this time.