There is now one week before the Alberta provincial election, being held next Monday. In the last week, we have yet to see much change in the polls. The right wing Wild Rose Party is still on top, regularly polling in the low 40s. The governing Progressive Conservatives are still typically polling around 30%.
Last week, we saw the televised leaders debates. All four party leaders had their strengths and weaknesses, and there was no clear winner. There has only been one poll released that was conducted post-debate. That poll, conducted by Return on Insight for the CBC showed the race between the two main parties getting closer, with the Tories gaining steam at 36%, while the WRP remains at about 43%. However, the poll seems somewhat dubious. While those numbers seem plausible, the regional numbers smell fishy. They show the Tories just four points between the WRP in Calgary, and the Tories behind the WRP in Edmonton by a greater margin of six percent! Unless another poll shows similar numbers, I am not going to put much faith into this poll, by an organization I've never heard of and which hasn't done a poll yet this campaign.
Most of my numbers were based on polls released by Abacus, Forum Research and Think HQ Public Affairs, last week. I also took into consideration comments left here on my blog, as well as other sources I've come across. I was also sent an email by the guy who runs the ChangeAlberta site, advocating that progressives vote strategically this election. I found the site to be a great resource in terms of determining how certain candidates are doing. I'd still like more comments, of course. The more people disagree with certain predictions, the more likely I will make major changes to those races. I'd also like to get views from across the spectrum, since taking into consideration many different view points will insure the least biased predictions.
Here are my current numbers:
Changes since my last prediction:
My only changes appear to be in the Edmonton area, since that is where most of the close races seem to be. 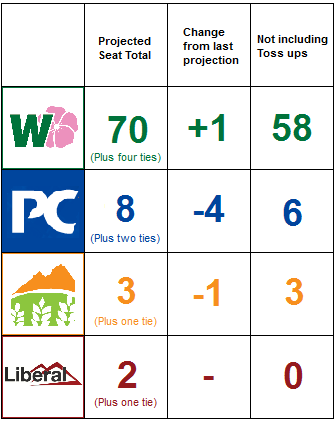 Edmonton-Calder: I found some redistributed numbers from the last election, and they show that Edmonton-Calder will be getting less NDP-friendly. This has reduced my NDP numbers in this seat to a tie with the Wildrose Party.
Edmonton Centre: It appears the Liberals are running a strong campaign here, so I've switched this from WRP to Liberal.
Edmonton-Decore and Edmonton-Rutherford: The Tory strength in Edmonton has weakened slightly, meaning these two riding is no longer PC, but are WRP-PC ties in my projection.
Edmonton-Ellerslie, Edmonton-Glenora, Edmonton-Gold Bar, Edmonton-Mill Woods: The slight dip in Tory support in Edmonton has meant that these riding is being have switched from PC to WRP.
Spruce Grove-St. Albert: I have heard from numerous sources that if one PC incumbent wins, it will be Doug Horner. The man is on the right of the party, so why elect the WRP here?
Strathcona-Sherwood Park: This riding is similar to Spruce Grove-St. Albert, in that is located in the Edmonton suburbs. I'm not sure how popular incumbent PC MP Dave Quest is, but he did get a higher percentage of the vote than Horner in the last election.
Posted by Earl A. Washburn at 8:33 PM