My riding boundary proposal for Winnipeg 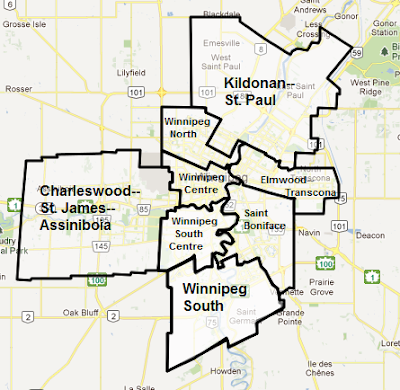 My next riding boundary proposal is for Winnipeg. Manitoba is guaranteed 14 seats in the House of Commons, which gives each riding a population of about 86,000 people. Winnipeg experienced moderate growth, but actually grew slower than the provincial average. But not much slower, so the city is still guaranteed eight of the province's 14 seats.
The last redistribution commission 10 years ago for the province recommended that there only be a 5% variance between the ridings. Much smaller than mandated. I'm not sure if they will do this again, but I see no reason why they wouldn't. Therefore, I used this measure for my proposal.
5 of the 8 ridings in Winnipeg fall within 5% of the ideal population of 86,000. One riding, Charleswood—St. James—Assiniboia was just 126 people short of being within 5% of the provincial quotient. Winnipeg South Centre, which is losing people is 4,000 short of being within 5% of the quotient, while neighbouring Winnipeg South is gaining in people and has 3,000 people more than 5% above the quotient. The fact that they are neighbouring ridings makes this issue very easy to deal with.
Here is my proposal for each riding:
Charleswood—St. James—Assiniboia: This riding consists of Winnipeg's western suburbs, as well as the rural municipality of Headingley. As mentioned it was just short of being within 5% of the quotient, so it needed to gain some area. The present eastern boundary of the riding (north of the Assiniboine) is Ferry Road. This leaves the neighbourhood of King Edward, which is in Winnipeg Centre, isolated as it is separated from the rest of Winnipeg Centre by industrial area. It therefore made sense for me to move it westward into the Charleswood—St. James—Assiniboia riding. This adds over 6,000 people to the riding, giving it a population of 88,000.
Winnipeg Centre
Removing King Edward from Winnipeg Centre thus created a domino effect in the rest of the ridings. Winnipeg Centre consists of the central, more working class part of the city. It has an ideal population going in to redistribution, but losing King Edward, puts it well under the 5% rule. My proposal compensates by adding the North End, Lord Selkirk Park and North Point Douglas neighbourhoods from Winnipeg North. This area will be somewhat isolated from Winnipeg Centre, as it is separated by the CPR railway. However, it does put Point Douglas in all one riding. And the area is similar to Winnipeg Centre, as it is a central neighbourhood. These changes bring the population of the riding up from 82,000 to 85,000.
Winnipeg North
Losing a chunk in its southeastern corner meant that Winnipeg North goes will bellow of being within 5% of the qoutient. This meant expanding the riding north, into Kildonan—St. Paul. One neighbourhood, Amber Trails, seemed like an obvious area to take from Kildonan—St. Paul as it was isolated from the rest of the riding, and is attached to an urban area in Winnipeg North. I also added its neighbouring neighbourhood, Leila North, thus uniting the Leila area into one riding. However, this still wasn't enough, so I moved the riding up the Red River, by adding the neighbourhood of Seven Oaks. This gives the riding 83,000 people, down 1,500 from its present populatuion.
Kildonan—St. Paul
With Kildonan—St. Paul losing some of its southern neighbourhoods, it too fell bellow the 5% rule. So, to compensate, I expanded the riding northward, so I wouldn't affect any more urban Winnipeg ridings. Kildonan—St. Paul consists of the far northern suburbs of the city, and also includes the rural municipalities of East St. Paul and West. St. Paul, which are growing exurban communities. I thought it would make sense to expand the riding northward to include more exurban communities. Since the rest of Manitoba is growing faster than Winnipeg itself, this is not a problem. My only problem with expanding northward is the lack of any natural municipality that could fit in the riding. That's why I only added a small rural part of the the rural municipality of St. Clements. This was enough to get within 5% of the quotient, and it gives the riding a population of 83,000. This is much lower than the present population of the riding which is 89,000. However, it's growing quickly.
Elmwood—Transcona
This riding, located in Winnipeg's eastern suburbs is a growing community with a population of 83,000. This is within 5% of the quotient, so I left it unchanged.
Saint Boniface
This area is Winnipeg's traditional Francophone community. With a population of 89,000, it falls within 5% of the quotient. I left it unchanged as well.
Winnipeg South Centre
This riding is the only riding in the city to have lost people in the last 5 years. With 78,000 people, it is below being within 5% of the quotient. Since Winnipeg South, its neighbouring riding is above the 5% rule, I only had to move enough people from Winnipeg South Centre to Winnipeg South and they would both be within 5% of the quotient. Transferring the neighbourhood of Linden Woods over makes the most sense, as it is the furthest northern part of the Winnipeg South riding. It is a better fit for Winnipeg South however, as it is more suburban in nature, and despite being a protrusion of the riding, transferring it to Winnipeg South Centre would isolate it from the rest of its new riding. However, adding any other area to Winnipeg South Centre would make even less sense. This change gives Winnipeg South a population of 89,000- 11,000 more than now. It's okay to have that many people, as long as the riding continues to lose population.
Winnipeg South
Winnipeg South consists of the city's furthest southern suburbs. It's the fastest growing riding in the city, and is overpopulated. It has 93,000 people. Transferring Linden Woods brings it down to about 83,000. Since the riding is growing, it doesn't matter that it is below the quotient, as it will grow into it.
Keep your requests coming. And again, if you have any of your own ideas, please don't be afraid to share them.
Posted by Earl A. Washburn at 3:25 PM

Email ThisBlogThis!Share to TwitterShare to FacebookShare to Pinterest
Labels: Redistribution