Swingometer based prediction of the Saskatchewan election

The last provincial election in 2011 saw the Saskatchewan Party win a landslide majority, winning 49 seats to the NDP's nine. The large thumping was largest landslide since 1982, and the Sask Party's 64% share of the popular vote was the highest in the province's history. The province had fallen in love with Brad Wall, and were enjoying the province's new found economic prosperity. Since then, Wall has become the poster boy of conservatism in Canada, especially since the defeat of Prime Minister Harper last fall, and the defeat of countless conservative provincial governments across the country. Every other province is now led by either a Liberal or an NDP Premier (though the Liberals in BC are notably right-of-centre).

Wall's popularity has made it difficult for the NDP to gain any traction in opposition. Their defeat in 2011 forced its leader, Dwain Lingenfelter to resign, which was helped by the fact that he lost his Regina Doulgas Park seat. Lingenfelter would be replaced as leader by Saskatoon Massey Place MLA Cam Broten, who has tried to renew the party, perhaps exemplified by a new swanky retro looking logo. However, the party has lingered in the polls in the mid 30s for much of the last four years, nowhere close to the Sask Party which has not dipped under 50% since the last election. All the polls now show the Sask Party to be leading the NDP at around 60% to 30%.

Since 2003, the province has only elected members of either the right wing Saskatchewan Party and the left wing NDP. The provincial Liberals have been nearly dead in the water since last winning a few seats in 1999. In the least election, the Liberals ran just nine candidates in the 58 seat legislature, and won a grand total of 0.6% of the vote. The Greens were the third party in that election. They ran a full slate of candidates, winning nearly 3% of the province wide vote. But for the Greens, Saskatchewan's brand of prairie populism is an anathema to the party.

While the Liberal brand is on the rise across the country, thanks to the federal Liberals still enjoying a honeymoon period, the provincial Liberals in Saskatchewan have failed to really capitalize on this. The party is running a full slate in this election, but most polls show them in mid-single digits, often behind the Greens. It is unlikely the Liberals will win a seat, though their leader, Darrin Lamoureux is running in a brand new riding and is not facing any incumbents. In all likelihood though, this election will see all of its seats go to either the Sask Party or the NDP.

Considering Saskatchewan is basically a two-party province, a fun way to make a rough prediction of the election outcome is to use what is called a “swingometrer”, something that viewers of British elections might be familiar with. A swingometer shows the uniform swing needed for a particular party to win a seat. My swingometer shows the two-party swing needed from the result of the 2011 election. The two-party swing is calculated as the average percentage point change each of the two parties has to shift in a particular seat for the opposing party to win it.

As fun as swingometers are, this election will likely not be all that fun to use it. All four polls that have come out just before the election show a very small swing in the NDP's favour from the result of the last election. The most NDP friendly of these polls was conducted by Mainstreet Research, which showed a 1.6% swing from the last election (it gave the NDP 31%, down 1% from the last election and the Saskatchewan Party 60%, down 4.3% from the 64.3% they won in 2011 – giving a swing to the NDP of 1.6%). This swing would net the NDP just one extra seat (Saskatoon Fairview), albeit just barely. The other three polls are less favourable to the NDP, showing even smaller swings in their direction. Insights West's poll showed the smallest swing, just 0.1% to the NDP. Except for the Mainstreet poll, none of the other pollsters show a swing that would be large enough for the NDP to gain any seats. Average the four polls, and the swingometer tells us that this election will produce an exact status quo result. Due to the recent seat redistribution, this would give the Saskatchewan Party two extra seats from their 2011 result (51 seats) and the NDP one extra seat (for a total of ten).

So, are we headed for the status quo? Maybe. But, the pollsters are showing different regional swings, which might put some seats in play. Also keeping in mind that the swingometer is a measure of uniform swing, and we all know that in reality, ridings do not swing in tandem. If we take a look at the regional breakdowns in the recent polls, we see that most of the swing in the NDP's favour is coming from Regina. An average of three regional polls suggests a 3.7% swing to the NDP in the province's capital. This would be enough to claim the riding of Regina Douglas Park (2.5% swing needed), the seat that former NDP leader Dwain Lingenfelter lost to the Sask Party's Russ Marchuk in 2011. Marchuk will not be running for re-election, and redistribution has made the seat much more NDP friendly, so a win there would not be unexpected for the New Democrats.

- Moose Jaw Wakamow: This riding was won by the Saskatchewan Party in 2011, but boundary changes have made it a notional NDP seat. The Sask Party has the incumbency advantage, and the NDP is not running the same candidate as they did in 2011, so this is a possible “pick-up” for the governing party, albeit just a notional one. The Saskatchewan Party only needs a 0.7% swing to win this seat.

- Saskatoon Fairview: Using the swingometer, this is the NDP's #1 target. They would only need a 1.6% swing to claim the seat. However, regional polls in Saskatoon suggest the New Democrats may not even see a swing in their favour in the city. Making it harder for the NDP is they are up against Jennifer Campeau, the minister of Central Services, who is the incumbent.

- Prince Albert Northcote: On the swingometer, this is the next seat on the NDP's target list after Saskatoon Fairview. The Sask Party won it in a close race in 2011. The NDP is not running the same candidate however, so it might be hard to defeat the Sask Party incumbent. The NDP needs a swing of 1.8% to win it.

- Regina Coronation Park: Two of the three regional polls in Regina give the NDP a large enough swing to pick up this seat, which the New Democrats would need 4.8% swing to pick up. They would have to defeat cabinet minister Mark Docherty to claim it though.

Wild card: Regina Pasqua: This brand new riding in the southwest corner of Regina is, on paper a somewhat safe Saskatchewan Party seat. The Sask Party would have won it with 56% of the vote in 2011 had the riding existed then. However as it is a new seat, they have no incumbent in the race. And this is the riding where Liberal leader Darrin Lamoureux is running. Considering the Liberals are polling in the upper lower digits in Regina though, it is unlikely that they will win it. 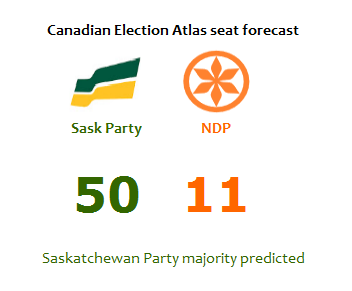 Using my swingometer, and looking at the regional swings in recent polls, I predict that the Saskatchewan Party will win a landslide majority, winning 50 seats to the NDP's 11. My swingometer-based prediction is that the NDP will win one more seat than they would have in 2011 on the new boundaries (Regina Douglas Park).

If the polls are correct, then we are looking at a very boring election, with very few – if any – ridings changing hands. Brad Wall, the most popular premier in the country is destined for his third straight majority. Polls close at 8pm Central Standard Time (10pm Eastern Daylight Time).

Seat by seat prediction (ridings coloured by how they would have voted in 2011 on the new boundaries):