Since last December's by-election, we saw the folding of the right wing Action Democratique party, as party members voted to dissolve the party and join the upstart Coalition Avenir (CAQ) party led by Francois Legault. While the CAQ led most polls back in December, they did not run a candidate in Bonaventure and have since dropped back to third place. This Spring's student protests have also thrown a wrench into the Quebec political landscape, and have put doubts into Liberal Premier Jean Charest's ability to govern.

Nonetheless, Charest's Liberal Party continues to lead most province wide polls- albeit neck and neck with the separatist Parti Quebecois. Both parties are polling in the low 30s, with CAQ about 10 points behind. The left wing Quebec Solidaire party, the biggest supporters of the student strike in the province is hovering around 10%, not much different from where they were in December. In the last six months, the fortunes of the Liberals and the PQ's have been boosted to the expense of the CAQ.

Officially, these two by-elections may prove next to meaningless, as it is likely that Charest will call for a general election in the Fall, meaning the two new elected MNAs will not serve in that capacity for long.

Argenteuil has been sitting vacant since its last MNA, David Whissell resigned from the National Assembly back in December. The riding is a rural riding located in Western Quebec. It straddles the Ottawa River, located about half way between Montreal and Gatineau. Its main population centres are Lachute, Brownsburg-Chatham and Saint-Colomban.
The Liberals have won this riding in every election since 1966, and it has never voted for the PQ. However, that doesn't mean the riding is a super safe Liberal seat. In the 1995 Quebec sovereignty referendum, the “No” side won the riding by a narrow margin of just 267 votes. The referendum race in Argenteuil was closer than the province as a whole. In addition, Argenteuil has had some close election results. In 1998, Whissell had won the seat by just 148 votes over his PQ opponent. In 1994, the Liberals won the riding by just 1802 votes over the PQ. And, in 1976, the Liberals won the seat by just 1,275 votes over the PQ. The riding has seen a lot of fluctuation depending on the election, as the Liberals have also done very well here, such as the by-election that first elected Whissell in 1998 where he won 57% of the vote.


The riding is quite diverse politically and linguistically. The rural and Anglophone communities in the riding's west and south are where the Liberals are the strongest. The Liberals are also strong in the ski resort of Morin-Heights in the riding's northeast. The more Francophone communities in the north and east of the riding are the strongest areas for the PQ. The PQ's strongest region in the 2008 election was in the fast growing Montreal exurban community of Saint-Colomban in the riding's eastern most extremity. The riding's largest community, Lachute is mostly Liberal, but with significant PQ pockets.

Federally, the riding is located in federal riding of Argenteuil—Papineau—Mirabel. In the 2011 election, the riding was caught up in the NDP wave the swept most of the province. Most of Agenteuil went NDP, except for a few pockets. The Tories won two polls in the western part of Argenteuil, both in the rural Anglophone municipality of Grenville-sur-la-Rouge. Provincially, this region is one of the most Liberal parts of the riding. The PQ also won a handful of polls, all of them in Lachute. The NDP was strongest in the most Francophone part of Argenteuil, in the north and east. 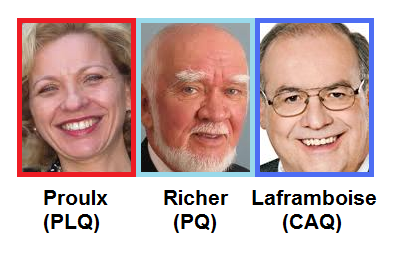 Due to history, and the fact that the Liberals are still leading in most polls, their candidate, Lise Proulx is probably best positioned to win the riding. Proulx, a native of Lachute is a former press attache for David Whissell and is the former director of the Lachute Hospital Foundation. She may face her strongest challenge not from the PQ, but from the CAQ candidate, Mario Laframboise who is the former Bloc Quebecois MP for the area. He had been unseated in last May's federal election by the NDP. The PQ are running Roland Richer, a local school director. The Greens are also looking to do well here, as they are running their leader, Claude Sabourin. QS is running Yvan Zanetti a self employed volunteer firefighter and craftsman beekeeper.

If it weren't for Laframboise, I would say this riding would finally be ripe for a PQ pick up. However, I reckon a lot of separatist supporters might vote for the former Bloquiste, splitting the separatist vote. This will allow Liberal Lise Proux to be the winner, becoming the first female to represent Argenteuil in Quebec City. I predict she will get about 40% of the vote, Laframboise will get 30%, while Richer will get 23%.

LaFontaine
LaFontaine has been sitting vacant for just over a month, when its MNA, Tony Tomassi resigned. He had been a Liberal, and a cabinet minister before being kicked out of caucus two years ago amidst a scandal and was forced to sit as an independent.

LaFontaine is an urban Montreal riding, located in the far north end of the city. It consists solely of the neighbourhood of Riviere-des-Prairies. The riding is named after Louis-Hippolyte Lafontaine, the first Prime Minister of the Province of Canada. It is one of many provincial ridings in Quebec named after someone instead of named after its geography. (A better name for the riding would obviously be “Riviere-des-Prairies”)

The riding is extremely Liberal, having voted that way consistently since 1985. While that may be fairly recent, it is the recent strength of the Liberal Party that makes this riding so strong for them. The Liberals have won this riding with at least 55% of the vote since 1988, and won at least 60% of the vote in the last three elections, including getting 69.8% of the vote last election. 60% of riding voters supported the “no” side in the 1995 referendum. Before the Liberals won the riding, the PQ had held it, something that would seem next to impossible these days.

The riding has a large Italian population, which is one reason why the Liberals are so strong, as Italians tend to vote Liberal. In 2008, the Liberals won all but four polls in the riding. Even though their support is strong across the riding, their strongest area is the southern half of the riding, south of Boul. Rodolphe Forget. The PQ won three of its four polls at the northern end of the riding in the new development of Pointe-aux-Prairies.

The federal results in LaFointaine were more interesting in the last election. LaFontaine is mostly located in the federal riding of Honore-Mercier, with its southern end in the riding of Bourassa. Boul. Rodolphe Forget was a strong divider in LaFontaine in the 2011 election. North of this street went mostly NDP, while south of the street went Liberal. 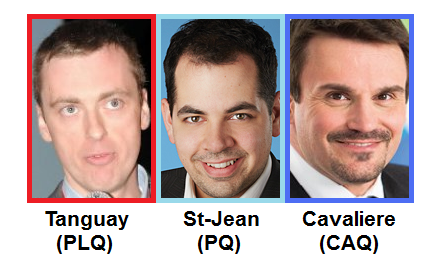 The Liberals are running party president Marc Tanguay. The PQ candidate is Frederic St-Jean, who is an adviser for the Société d'habitation du Québec. The CAQ is running lawyer Domenico Cavaliere. The Greens are running Gaetan Berard, who ran federally in Honore-Mercier in 2008. Finally, QS is running social worker Sebastien Rivard.

Unless hell freezes over, it is pretty clear that the Liberals will be the winners in Lafontaine. I predict they will get a reduced majority of the vote in the riding, perhaps 58%. The PQ will likely get around 25% of the vote, while the CAQ will get about 12%.

Polls close in both ridings at 8pm Eastern.
Posted by Earl A. Washburn at 12:04 AM