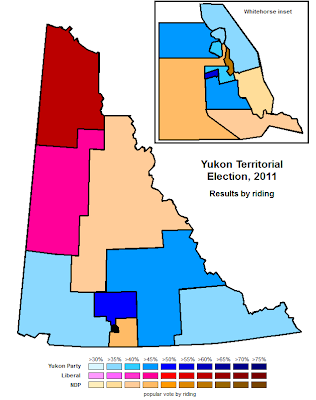 Back in October, on the same day Newfoundland went to the polls, Canada's smallest territory, the Yukon went to the polls. The Yukon is the only one of Canada's three northern territories to elect a partisan legislature. The Yukon's party system is much like your average system in the provinces. There is the NDP, and the Liberals, and the right wing party- the Yukon Party (formerly the Conservatives).

Going into the October 11th race, the Yukon Party held a majority of the seats in the legislature. The party had won 10 seats in the last election, held in 2006 out of 18. The Liberals won 5, and the NDP 3. For the 2011 election, the legislature would be gaining an extra seat, while the territory's riding boundaries had been redrawn.

There were few polls going into the election, given how small the territory is. The final poll released before the election showed the Yukon Party and the NDP tied at 35%, with the Liberals not far behind at 26%. Of course I remember how bad the polls were from the 2006 election, and I knew to expect anything on election night.

The Yukon Party led throughout the night, and ended up winning a majority of the seats, gaining one from the last election to win 11. The NDP did a lot better than in 2006, forming the official opposition for the first time since 2002, winning 6 seats. The Liberals won just two seats. With the victory, the Yukon Party became the first party in territorial history to win three straight elections. The Yukon Party won 41% of the vote- the same percentage that they got in 2006. The NDP won 33%- up 9% from 2006 while the Liberals won 25%, down 9%.


Electoral geography
The Yukon Party has been able to build its majorities on winning a majority of seats in both rural Yukon and in the territory's only major urban centre, Whitehorse. In 2006 they won 5 of the 9 rural ridings, and won 5 of the 9 urban ridings. In 2011, rural Yukon lost a seat, and so did the Yukon Party. They still won 4 of the 8 seats, while the NDP and the Liberals each won 2. The Yukon Party dominated Whitehorse, which gained 2 seats for this election. The Yukon Party won 7 of the city's 11 seats, and the NDP doubled their seat total in the city to 4. The Liberals meanwhile were shutout of the city, including their leader's seat. 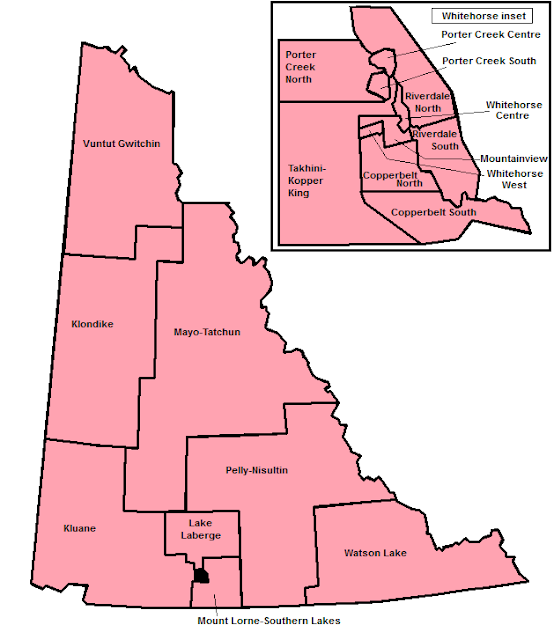 The Yukon Party was shutout of the northern part of the territory, where the Liberals won their only 2 seats. The did better in the south, where they won all but one of the rural seats. One of the Liberal seats in the north was actually a gain, in Klondike where they defeated the YP incumbent. This means the Liberals were only able to hold on to one seat in the territory that they previously won. This was in the sparsely populated riding of Vuntut Gwitchin, where their candidate was able to win with just 93 votes. Winning the Klondike was a big victory though, as they have never won the seat, which includes Dawson City. The NDP picked up one seat in the rural Yukon, gaining the riding of Mayo-Tatchun from the Liberal candidate, who was a former NDPer himself.

The Liberals lost both their seats they held in Whitehorse. Their leader's seat of Copperbelt was divided in two ridings. Their leader chose to run in Copperbelt North, but was defeated by the Yukon Party candidate by 113 votes. Meanwhile, the NDP gained the seat of Copperbelt South. The Liberals also lost the seat of Porter Creek South. Their incumbent lost to the Yukon Party by just 14 votes. The NDP gained two seats from their mark set in 2006 in the city. They held on to their leader's seat of Whitehorse Centre, as well as the seat of Takhini-Kopper King. The NDP won Takhini-Kopper King in 2006, but their candidate crossed the floor to join the Yukon Party, only to be defeated by his former party in 2011. In addition to those two seats, the NDP also gained Riverdale South from the YP and the aforementioned Copperbelt South from the Liberals. Meanwhile, the Yukon Party did quite well in the city by gaining some of the new seats there. The city was also home to their best riding, Whitehorse West where their candidate won 58% of the vote.

The 2011 race in the Yukon gave us some big surprises compared to their boring election of 2006. Almost every incumbent was re-elected in 2006, even after many had switched parties since the previous election. 2011 saw many incumbents go down into defeat. So much for the notion that northerners always vote for the candidate, not the party.  That didn't seem to happen this election.
Posted by Earl A. Washburn at 11:40 PM

Email ThisBlogThis!Share to TwitterShare to FacebookShare to Pinterest
Labels: 2011, Yukon