Saskatchewan went to the polls last month, and voted overwhelmingly for the right wing incumbent Saskatchewan Party. The race wasn't even close, the SP won win the 2nd highest popular vote percentage in Canadian history. Only Danny Williams' landslide in Newfoundland in 2007 saw a party win a higher percentage of the votes.
The Saskatchewan Party, led by Premier Brad Wall won 64% of the vote in the November 7th race. The opposing New Democrats won just 32% of the vote, the lowest since the party was the CCF in 1938- the election before Tommy Douglas' famous win in 1944. The race however was not the biggest landslide in provincial history. The NDP was efficient enough to win 9 of the 58 seats in the Saskatchewan Legislative Assembly. They won the same number in 1982, but their opposition then, the Progressive Conservative Party won 55 seats in a larger legislature. The Saskatchewan Party won 49 seats in this year's race. In 1982, the PCs won 54% of the vote compared to the NDP's 38%.
The province has undergone a large polarization since 1982, which saw the two major cities (Saskatoon and Regina) along with the far north support the New Democrats, while the rural parts of the province support the Saskatchewan Party. In 1982, the NDP still won some rural seats, and were actually shut out in Saskatoon. Flash ahead to 2011 where the NDP won no rural seats, save for the two far northern seats. Meanwhile, they won four in Saskatoon and three in Regina. This polarization ensured that the NDP won as many seats as they did in 1982 with less of the popular vote.
The Sask Party had already won a large majority in the previous 2007 election, where they had won 38 seats to the NDP's 20. They gained a total of 11 seats, three in medium sized cities (The Battlefords, Moose Jaw and Prince Albert), three in Saskatoon, and five in Regina, previously an NDP stronghold. Following the election, NDP leader Dwain Lingenfelter, who lost his own Regina seat resigned as leader.
The election was the nail in the coffin for the once dominant Liberal Party. The ran just 9 candidates, and won less than 1% of the total vote. The finished 4th in the popular vote, as the Green Party had their best election even, winning just under 3% of the vote.
The last couple of polls before the election were somehwhat accurate. Forum Research's last poll was off by 2% for both the Sask Party and the NDP while Praxis was off by a bit more, as they understated the NDP's performance, giving them just 26%, while they overstated the Sask Party, giving them 67%.
Where I went wrong with my predictions...
All in all, Saskatchewan was my best prediction of the year, as I just got 3 ridings wrong, in other words, 95% accuracy. I have found that 2 way races are easier to predict than multi partisan races, but I did find predicting the Saskatchewan election tricky, due to the fact that the province has never seen such huge numbers for any particular party. I said the NDP would win six seats, but they won nine. The NDP did not win a single seat where I predicted the Sask Party would win.
Regina Lakeview
Highly illusive regional polls suggested bad things for the NDP in Regina, so I went a bit overboard to predict this “safe” NDP seat as going to the Saskatchewan Party. After all, it was the federal party's best Regina riding in May. The race was close however, NDP incumbent John Nilson won by just 145 votes. I said the Sask Party would win by 12%. This did not come true, and I was off by an average of about 5% for each party.


Regina Rosemont
This race wasn't even close. The NDP held on to this riding by over 900 votes. This seat was won by the federal NDP in May, but not by that much, so I thought the Sask Party would be able to pick this one up. The NDP actually increased their vote share here (so did the Sask Party, though). What happened was a relatively strong Liberal performance in 2007 (9%) disappeared in 2011 due to the lack of a candidate. Some of this went to the NDP, and ensured an increase in their support- a rare occurrence on election night for the party. Due to this huge discrepancy, I was off an average of 10% per party here.


Saskatoon Massey Place
Polls showed that the NDP wouldn't get as trounced in Saskatoon as badly as in Regina, but even still I predicted this riding would fall for the Saskatchewan Party. The NDP ended up winning this seat by nearly 800 votes, only decreasing their vote slightly from 2007. I figured the Sask Party would win by 7%, but the NDP carried this seat by 11%. I was off an average of 6% per party here.
---
% Change Maps
Saskatchewan Party change
It was a big election for the Sask Party, as they made gains in all but one riding. Much of their biggest gains in votes came in the Saskatoon and Regina areas. These were most of the NDP seats were, and therefore the target of the campaign for the Sask Party. The party was also able to capitalize on the collapse of the Liberal vote which was "strong"-ish in 2007 in these cities. The Sask Party made only smaller gains in much of the rural parts of the province, because they had tapped into most of their support there already. It's difficult to gain when you already won 70% of the vote last time. The biggest gain for the Sask Party came in Regina Walsh Acres. A riding they won in 2011, but didn't even field a candidate in 2007. The only riding the Sask Party lost ground in was Cannington. This seat is one of the strongest for the Sask Party- the got 77% there in 2007. It was hard to make gains on those numbers I suppose, but the real reason for the decrease was the better than expected showing of the Progressive Conservative Party candidate, which tapped into Sask Party support and won 7% of the vote. The Tories aren't a real force any more in Saskatchewan politics, as the Sask Party has filled in their role on the right, but they still run a handful of candidates to remain registered. 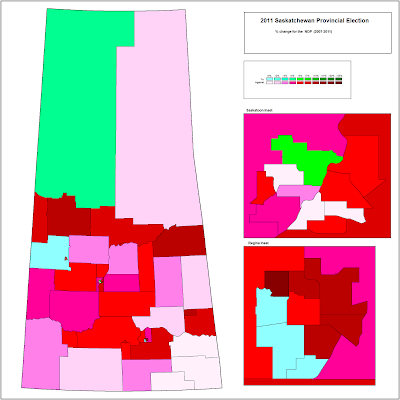 NDP change
The NDP map is mostly red, signifying a loss of votes in most ridings. They were actually able to make gains in small handful of seats, thanks in some part to 2007 Liberal voters not having that choice again. The NDP's biggest increase came in Saskatoon Meewasin, a riding they actually had, but lost to the Saskatchewan Party. The Liberals ran their leader in this riding in 2007, and did very well, despite finishing third. That vote collapsed, and both the NDP and the Sask Party gained from that. However, the Sask Party gained a lot more, enough to win the riding from the NDP. The riding where the NDP lost the most votes was Regina Wascana Plains, where the Sask Party didn't run a candidate in 2007. Much of Regina was bad news for the NDP, where they lost a lot of support, except for three ridings that stood out in bucking the trend in the rest of the city.
Posted by Earl A. Washburn at 5:40 PM

Email ThisBlogThis!Share to TwitterShare to FacebookShare to Pinterest
Labels: 2011, Saskatchewan