Saskatchewan goes to the polls today, and everything seems to be pointing to a Saskatchewan Party landslide victory. The only question remains- how many seats (if any!!) will the NDP win, and where. It will be a tricky election to predict, because we are charting in uncharted territory for the province. No party has won more than 60% of the popular vote in an election, and all the polls indicate that will happen.
There were two polls released in the last few days. Praxis' last poll has the Sask Party at 67%, and the NDP at just 27%, while Forum Research showed different numbers, giving the Sask Party 62% and the NDP 34%. Forum Research was the more recent poll, and had a higher sample size, so I am looking more at their numbers. Plus, the poll showed regional numbers. The Sask Party is polling in the high 50s both in Saskatoon and Regina. I have factored that into most of my predictions. This is actually a higher swing than in the rural areas, which is bad news for the NDP, as those urban areas are where their seats are at. The swing in Regina in particular is bad news for the NDP, because it would be 16% more for the Sask Party. They could be swept off the map in the city.
Seat by seat predictions:
Calling the toss ups
Cumberland
This northern Saskatchewan riding has voted for the NDP and its predecessor, the CCF in every election since 1952. And, the NDP has won this riding with over 60% of the vote in every race since 1982. However, there was a by-election in this seat in 2008, where the NDP won by just 164 votes! That narrow by-election victory is making this race seem difficult to call for the moment. Have things changed in this riding? Well, not necessarily. The federal NDP would have won this seat in the federal election in May, getting 63% of the vote here. My hypothesis is that the by-election in 2008 has a low turnout of Natives in this highly Aboriginal riding. They are probably more likely to vote in general races. That's why I think the NDP will still win this seat.
Moose Jaw Wakamow
The Saskatchewan Party has 1100 votes to make up in this riding- that's the amount they lost by here in 2007. This has to be one of their targets though, as the federal Conservatives won the most votes in this riding in May (although it was close). With Brad Wall's party polling better than Harper though, it's hard to think the NDP will be able to hold on here. Sask Party pick up.
Prince Albert Northcote
Prince Albert Northcote is very similar to Moose Jaw Wakamow. The NDP won the seat by 1200 votes in 2007, and the federal Conservatives won the seat back in May, but narrowly. While, the NDP have held this riding since it was created 20 years ago, it's time for it to lose it. Sask Party pick up.
Regina Elphinstone-Centre
With the Forum Research poll showing a huge swing to the Sask Party in Regina, the NDP could be left with just one seat, and that is this one. And even that one seat will be a close one. This is the strongest NDP seat in Regina. The party won it by 2000 votes in 2007. It was also the federal party's strongest seat in Regina in the federal election in May, where the party got 54% of the vote. I expect the NDP to win this seat, but it will be the only one in the city!
Saskatoon Centre
The NDP have held this seat since 1986. It was the NDP's strongest seat in the 2007 provincial election in Saskatoon. With the upswing in the Sask Party here however, it could be swept up in the landslide. However, we must remember it was won by nearly 2000 votes in 2007, and also the federal party won the riding by 21% in May. NDP hold.
Saskatoon Fairview
The Sask Party lost this seat by 1100 votes in 2007. Just like Saskatoon Centre, this seat has been held by the NDP since 1986. However, it's not as strong of a seat. The federal party won the riding by just 7% of the vote in 2007. It looks like the Saskatchewan Party will have just enough support to pick this seat up.
Saskatoon Nutana
Last prediction, I had this seat as a tie. It appears it will be the only seat I have going from a toss up to the NDP, although it will still be a toss up, really. Nutana was the federal party's best Saskatoon riding, winning the seat by 26%. Provincially it was won by 2200 votes in 2007. You would think it would be a lock, but the question remains how well will the Liberals do here? I think the NDP should be able to keep this seat.
Saskatoon Riversdale
Another riding the NDP has held continuously since 1986. It was also held by former Premier Lorne Calvert until 2009. The party was able to keep the seat in the by-election that year, despite doing as well as they are now in the polls. The federal party won the seat by 12%, which should be enough for the Sask Party to overcome- however, if the NDP was able to keep the seat in the by-election, they should be able to keep it in the general as well.
Riding changes since the last prediction:
With regional polling numbers coming out of Regina, I have now taken Regina Coronation Park, Regina Douglas Park and Regina Walsh Acres out from the NDP, and given them to the Saskatchewan Party. That would mean NDP leader Dwain Lingenfelter would lose his seat of Regina Douglas Park! Additionally, I have taken away Saskatoon Massey Place from the NDP and given it to the Sask Party. The two ties in my last projection have been distributed evenly to the two parties. Prince Albert Northcote I now have going to the Saskatchewan Party, while I now have Saskatoon Nutana going NDP. 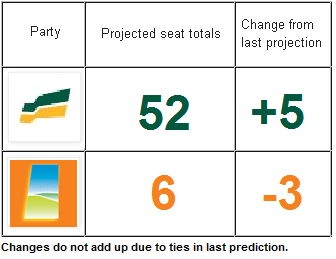 Conclusion
The 2011 Saskatchewan provincial election will be one for the history books. We know in all likelihood that the Sask Party will win the highest popular vote in provincial history, but will they be able to beat the seat record? It's unlikely, as that mark was made in 1982 when the Tories won 55 seats in a larger (64 seat) legislature. Perhaps they will force the NDP into the smallest official opposition caucus in provincial history. That will be tough to, as that mark is five seats, set by the Liberals in 1944 (defeated by the CCF) and by the CCF in 1934 (defeated by the Liberals).
Speaking of the Liberals, what will happen to them? Will they be able to break 10% in any seat? The same question can be asked of the Green Party, who unlike the Liberals are running a candidate in every riding. It will be humiliating for the Liberals to finish fourth in popular vote behind the Greens, but that seems to be inevitable at the moment.
Polls close at 8pm CST, or 9 EST.
Posted by Earl A. Washburn at 4:09 AM